The history of this play structure project began while we were in lockdown here in Spain, back in May 2020.

My name is Pedro and I’m the father of a three and a half year old boy: Bruno.

After seeing how one of the safety measures to stop the pandemic included the closing of playgrounds for children, and knowing how much Bruno likes to play in them, I decided to create a play area structure in his room.

After intense planning and seeing the possibility offered by one of the IKEA shelving models, I got down to work.

It was hard work, but the satisfaction was maximum when Bruno opened the door to his room and found his playground. His happy face said it all.

The planning lasted two weeks and the construction took approximately three months. (Each day I put in two hours.) Without a doubt, the most difficult thing was to make the second structure.

Throughout the explanation there are several tips that I hope will be useful. 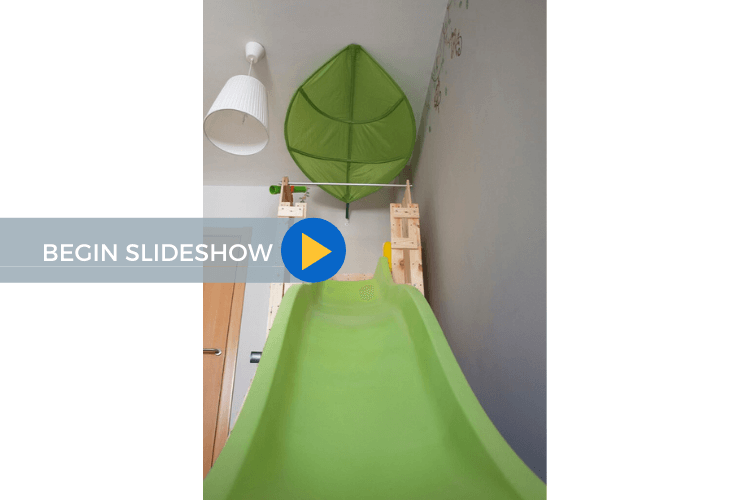 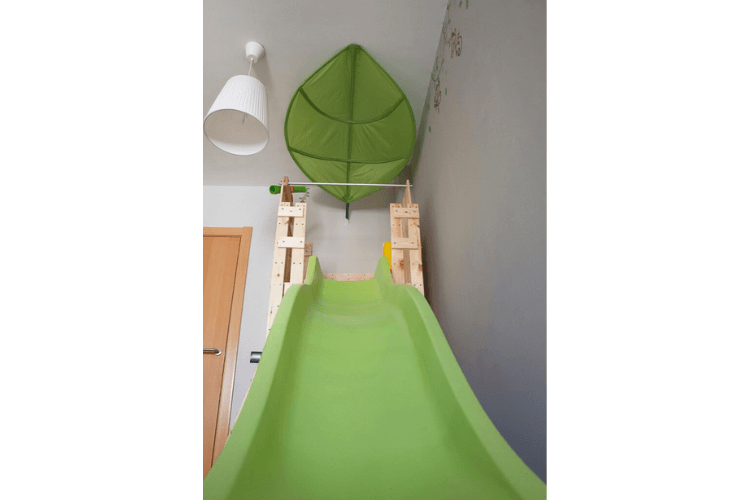 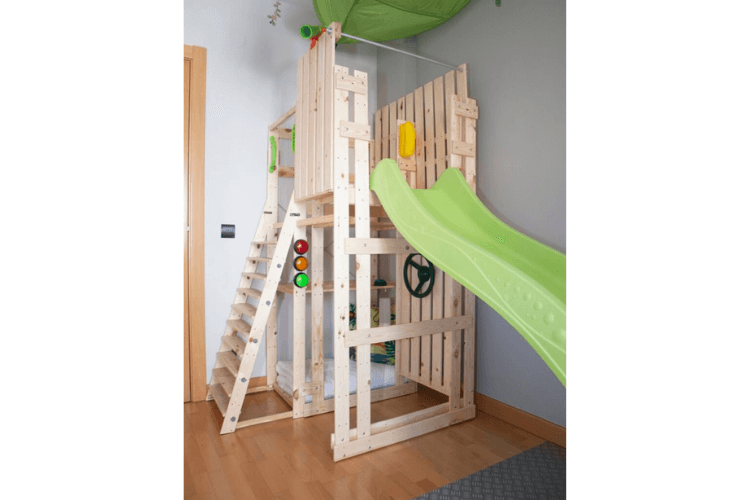 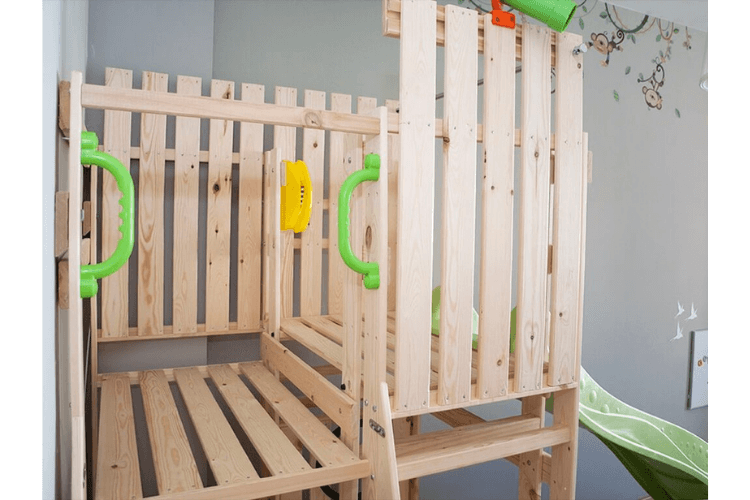 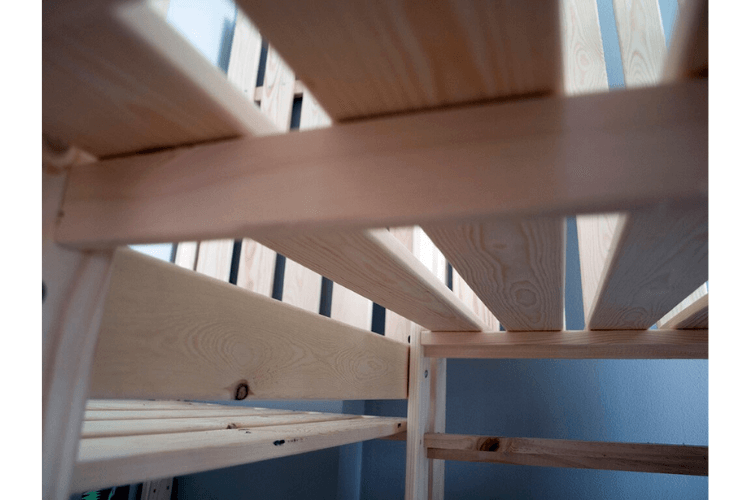 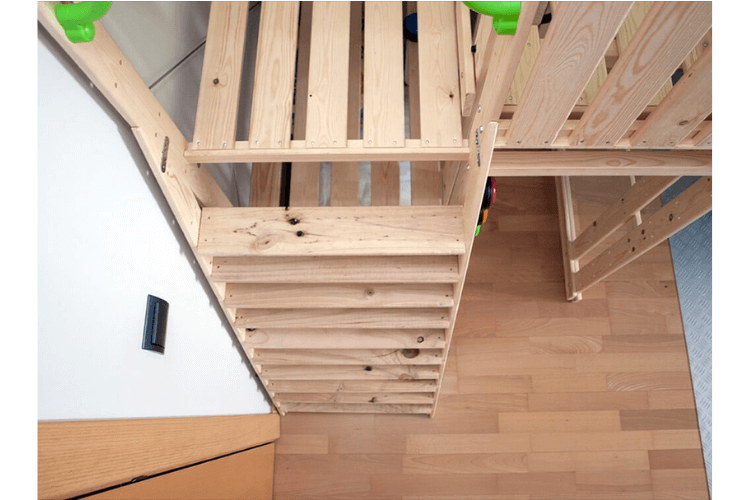 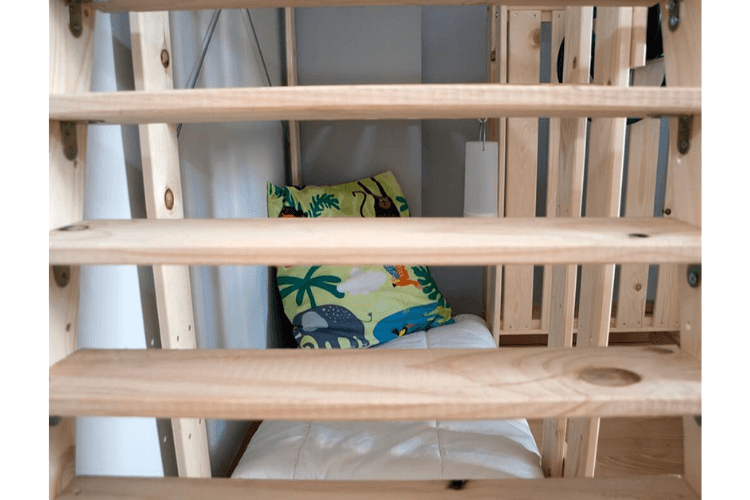 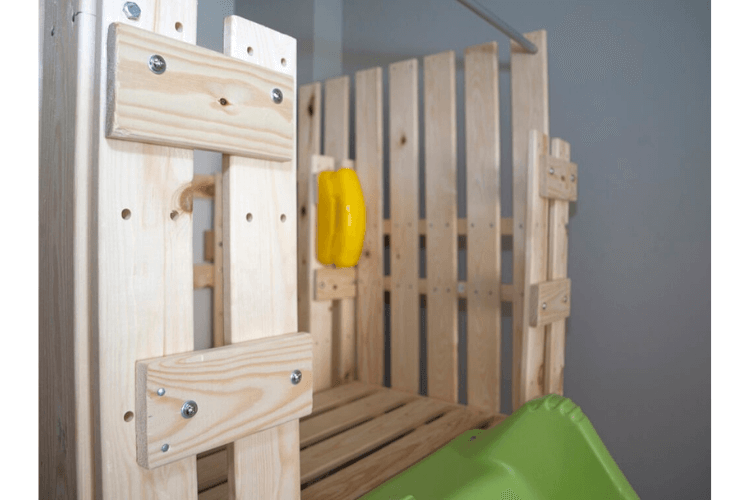 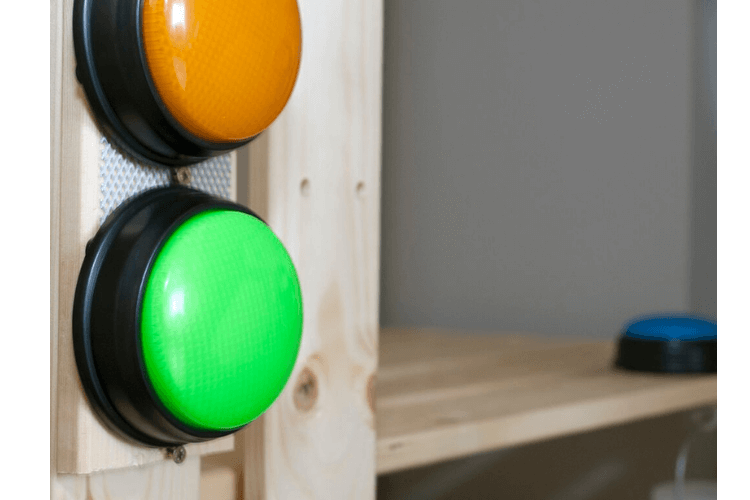 FROM THE HEAD TO THE COMPUTER

Before I started working with the HEJNE shelves, I did a 3D rendering of what I expected the final result of the play area structure to be. That gave me the opportunity to see all the materials I needed, in addition to the shelves.

AND NOW… WHAT MATERIALS DO I NEED?

As you have to work a lot with slats and different lengths, a saw was essential (manual in my case). And, you’ll need a nail puller to remove the nails and take apart the HEJNE shelves to use the different components of the shelves.

In addition, we will need a hammer, wood file, Philips screwdriver and double pipe wrench.

I have tried to make the most of the holes that come pre-made in the HEJNE connecting posts, but still had to make a few extra holes.

But, without a doubt, the most important element that joins many of the parts of the structure are the 42 union screws and its 84 steel plain washers.

I will develop a small explanation for you when assembling the structures. The “how” of the installation of each of the elements, you can see in the next section “EXPLODED STRUCTURES“.

It is the simplest structure. We assembled it exactly the same as if we were assembling a shelf. The only exception was we mounted one of the shelves vertically.

Once we have assembled three of the four shelves, all of them in their original position (horizontal) and in the inner hole of the connection posts, we will take advantage of the outer hole of said posts to install the fourth shelf but vertically.

Before doing this, we must make a small modification to the shelf.

One of the ends of the shelf in which the five slats are nailed, must be unlocked and rotated until it reaches the last of the upper holes of the connecting post before nailing it back in.

(This shelf is identified with the letter C, in the exploded view of the structure that will appear “EXPLODED STRUCTURES” image.)

Once this is done, we will make the ladder. (This is the part that took me the longest).

In order to make the ladder, we will use two connecting posts and the horizontal timbers of two shelves, which we will have to transform to adjust to the width of the ladder (18,50 inch. -47 cm.-).

The steps must be parallel to the ground and we will fasten them to the connection posts to form a single set using metal brackets and screws.

Likewise, once we have made the structure of the staircase, we will join it to the first module by means of four small metal plates that will go through the interior and exterior area holding.

Once we installed the ladder in the structure, it would be as follows. (In my case, we attached the structure to the wall for security).

Tip 1: To make the ladder more secure, in the lower area, I joined some wooden slats that go to the ladder and Structure 1.

Tip 2: In the area where the connecting posts are in contact with the ground, we stuck on felt protectors to protect the floor (especially if it is made of wood).

It is the structure that takes the longest since it takes advantage of part of “Structure 1”. In addition, it will have to be joined to it.

The first thing we have to do is modify two shelves exactly the same as how we made the modification for “Structure 1” when it comes to installing them in a vertical position.

In addition, we have to install two more horizontal elements on a third shelf (which is the only one that we will install in a horizontal position) where part of the new connection strips will be attached. We see it step by step.

At this point, it must be taken into account that this structure will have six connection posts.

We will take advantage of two of the connection posts of structure 1. This will make the total set more robust. Once finished, and before installing the upper vertical shelf that will be attached to another structure, it would look like this:

Tip: In the part where the slide is supported, we will put a reinforcement so that it has more resistance.

The two shelves that we will install in a vertical position will go in the outer holes of four connection posts (two of them belonging to structure 1). The final result of the game structure is as follows:

As for the shelf that will be installed in its original position (horizontal), it will go in the outer holes of the aforementioned connection posts. In addition, having modified the shelf by installing two extra horizontal anchoring elements, these will be used to install the other four connecting posts.

Once this is done, we will join the two structures through the two vertical shelves and the horizontal shelf. In addition, the connecting elements of the shelves that we have completely disassembled, whose slats have been used to build the ladder, we will use them to join the connection posts of “structure 2”, across the width, and make it safer.

With the same purpose, we will use the connecting posts that we have left and the woods from the last shelf that we have completely disassembled, along the structure.

To be able to join these woods, we will make the corresponding holes in them with a wood drill. and we will take advantage of the holes in the connection posts where we will install the union screws.

Once the structure is finished, and so that the different elements could be properly leveled, I have been installing pieces of wood joining different parts, leaving a consistent play center.

A steering wheel will be installed on the lower vertical shelf installed in the last module (under the horizontal shelf), which will be one of the components of the games center.

Finally, in the upper area of structure 2, which is where the slide is installed, we will put a metal bar that we will have to drill at the ends to put a pin and thus be more secure. It is the bar where the child will hold onto to sit on the slide and be able to sit. This metal bar has been obtained from an old IKEA “SKOGSKLÖVER” model blind.

The final result, installed the slide and the game elements, is as follows:

If you have the opportunity and the space to install this playground (or similar), I hope you have the same success as it has had with my son: he is happy!