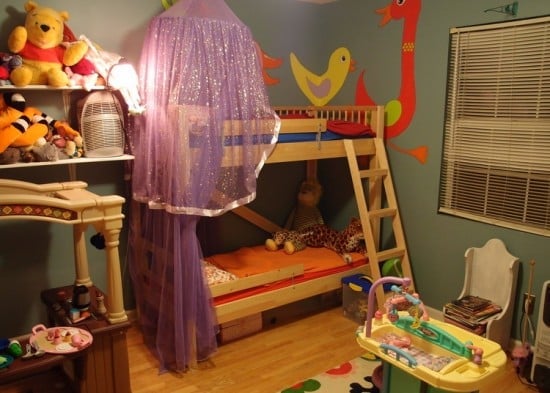 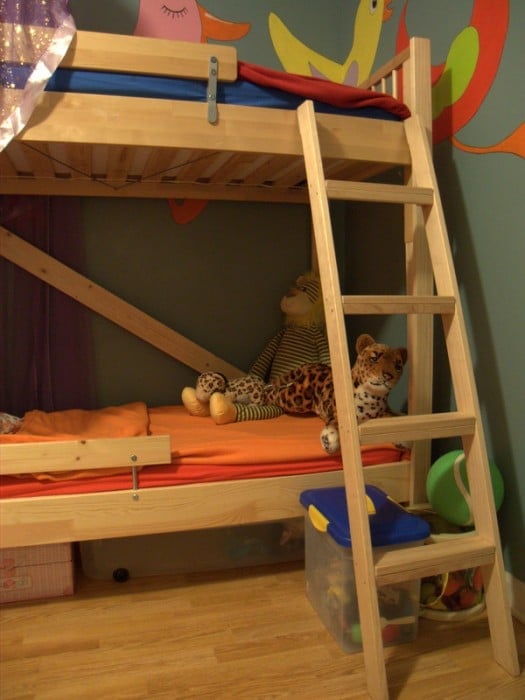 We had a convertible crib (made toddler bed) and an Ikea toddler bed in a small-ish room made smaller by the fact that two kids were sharing the same space for toys. It came time to figure out how to make the most of the space and we decided to try a hack to blend two Ikea toddler beds into bunk beds. The Ikea toddler beds are a great size that could potentially carry a child through their elementary school days entirely before needing a larger bed.

Our primary goals in this little project (occurring over the winter holiday break and coldest days in about 20 years) were:

We already had one which was termed the GULLIVER and paid around $150.00 for it a couple of years ago. It’s made out of birch, so is lightweight and very stiff. We opted for the KRITTER bed for the base (2 year-old boy) which we paid $89.00 for recently. It’s natural pine and not an exact match for the birch GULLIVER, but the colors blend well enough together. We also had to buy a mattress for the new bed – the toddler mattresses are generally about $20.00 cheaper than the comparable twin models at Ikea. Add to that some select pine (heartwood, presumably, as it is knot-free) and hardware to extend what came with the beds, and I was able to knock together what I feel are safe and secure bunk beds that take up as little space as possible and cost very little!

Thank you very much, Ben, for your inspiration in our design (Ikea Toddler Bunk Beds, April 2013).

Revisiting our originally stated priorities, #1 was accomplished and trumped some decisions around #2. We could have gotten completed bunk beds for less at Ikea, but they would have been on a twin footprint and taken up a bit more space. Even looking back at the options, I’m glad we went with the toddler bunk beds hack!

As you can see from the first image, the bed was designed to fit in a corner of the room where the ladder would not impede the window (nor even make the window any kind of risk to climbing children). The ladder and safety rail are designed such that they can be placed on either side of the bed.

The beds supplied the majority of the frame material to put this together, but I created simple posts of 90° butte joints to add rigidity to the structure in all directions. I had to compensate for a 1cm difference in widths of the two beds within that post system, so the posts integrate a glued shim for the upper bed to fit snugly inside. I also wanted the beds to be supported by more than just bolts in posts, so I added a spare leg shim between the upper and lower beds to make it a continuous leg from top to bottom. If a bolt breaks, then I trust gravity will continue to do it’s job and hold these beds firmly together. The spare leg shim is glued to the inside of the post as well. In the end, the post is a strange design of spare parts when viewed absent of the two beds. In fact, the post system was the most challenging part of the project because of the nature of getting all the shims glued down in exactly the right place in relationship to the bolt holes. I wanted the end result to sit tightly together and for the combined post and pre-fab’d bed leg to sit jointly on the ground. This would mean that the bed is supported entirely on the union of pieces rather than any single part taking a greater brunt of the force (at least until kids begin hopping and climbing on it). I also added a diagonal brace at the back that connects the top of a post (at the rail junction) to the bottom of the opposite post (also at a rail junction). This was done specifically in opposition to what the wall would provide in this position.

The Most Viewed IKEA hacks of 2021 goes to these 3

I threw out most of the existing bolts to hold the head and footboards to the bed rails. I replaced them with longer hex bolts (still threaded through metal cross-dowels). I also tapped new t-nuts at the top and bottom of the posts to snug the long posts to the bed frames. I had no problem with this in the pine, but as seen in the pictures, the birch was less forgiving and needed a larger hole before driving the t-nut home with a hammer. Fortunately, I didn’t add these with any intention of structural need.

The final component (which was all my own) was the ladder. I wanted a ladder that took bearing weight to the ground rather than pulling at the bed rails. The bed would be unlikely to fall with a child climbing into it, but at this rate, my wife and I can safely climb up and the rails will last longer without that type of force to contend with. The ladder is a 20° angle from the bed, which we’re all able to manage very well. The rungs are more 90° butte-jointed pieces to keep them latterly stable. They’re sitting on blocks glued and brad nailed to the rails, and then I put a couple of spiral nails through the sides to help out in case of a sudden glue failure. I also attached the ladder to the bed rail via some aluminum strips fashioned into ladder hooks. I did that on a hobby anvil/vice since I didn’t have any idea where I could find ladder hooks with my specific 20° angle in mind. Just recently, however, I did come across these steel variety at Rockler which I probably would have made work in the design.

The beds turned out really nice despite the corners we cut in buying different beds to complete the project with. Actually, the KRITTER bottom bed and GULLIVER top look really cute together. My daughter gets a princess canopy, and my little boy has a couple of animal silhouettes built into his headboard (he also gets the added luxury of some princess canopy drapery hanging around his head :D)! The project was a success all the way through, and I’ve certainly tested it’s handling capacity with me climbing up and reading a story or two from the penthouse.