We started with 6 Billy bookshelves surrounding our TV – One 15″ and one 30″ on either side and two wall-mounted ones above the TV. We also used the extenders at the top of vertical Billy bookshelves to make them even taller.

First, we put the shelves where we wanted them. We then attached them together by drilling through one peg-hole into the corresponding peg-hole in the next bookcase and putting a screw through it. This created one huge piece of furniture that was attached to the wall. Then we used black paint to paint inside all of the other holes so that you couldn’t see them too well.

Next, we measured where two edges of the Billy bookshelves met us and became twice as thick. We then cut 3/4″ trim (we used quarter-round, but any trim would work) everywhere that was only 1 shelf wide that we wanted to be wider for the next step. We then painted the trim black and wood glued to to shelved. 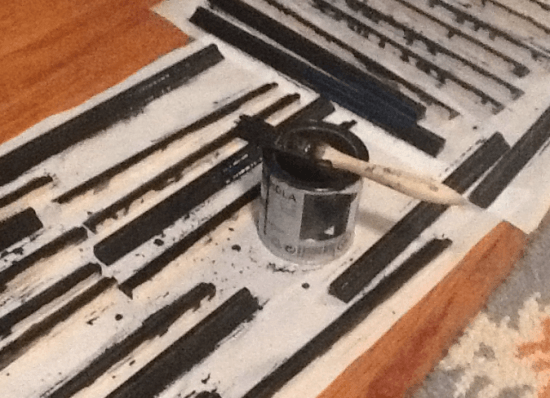 After that, we used pre-glued edge-banding in walnut to cover everywhere two edges of wood met – whether it was two Billy shelves OR one shelf and a piece of quarter-round. It was very easy to apply using a normal house-hold iron. I then used both an X-acto knife and an edge-banding trimmer to trim the 2″ wide walnut edge-banding to the width needed for the project.

This is where we ordered the edge-banding and trimmer. 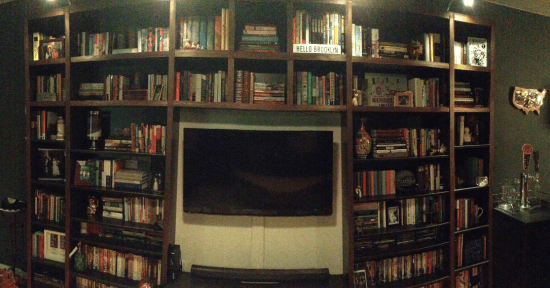 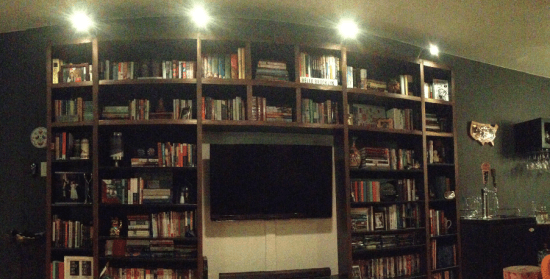 After that, we installed four NON lights at the top. All cords were hidden by the extended edge-banding along the top of the shelves. Now it looks like we have one big piece of furniture!