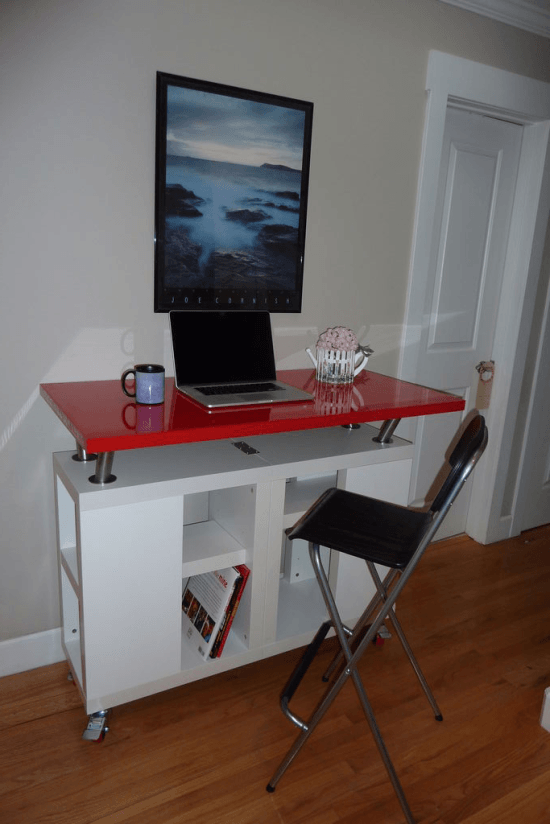 I already have a standing workstation thanks to the help of Ikeahackers. I needed more space and I wanted a solution that allowed me to stand, sit on a stool (and hence provided legroom). I also wanted the ability to wheel it around to position it in the middle of the room.

In fact if I am working on a bulky project it’s handy being able to walk around it and work on the back, front, sides at the same time. I also wanted space underneath to store boxes of nic-nacs, tools, cables etc.

There’s other Ikeahackers solution which use a flat Expedit but that is superwide at 149cm, I had roughly 120cm.
This solution uses:

Add to the above some screws and a tube of epoxy if you really feel scrappy.

2. Put them upside down with the only closed side of the Ullrik back to back.

3. Mount the wheels underneath at the corners.

Please note that the interior is “empty” in most location. Choose short sturdy screws that will catch on the laminate exterior

(Not feeling scrappy? you can skip this one) Now lay the Ullirks down side side. Apply epoxy to the top and the bottom of the side panels which create the joint between the tow . Apply four force clamps. It might be easier to have the two Ullricks resting on their top shelf for this step. In this pic you can see I still have the clamps on. 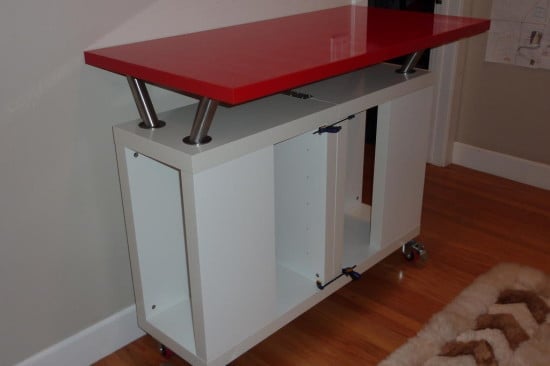 4. Belly up again, and now screw into the bottom 3 mending plates. You can find these in the construction work area at hobby stores. They are used to keep wood frames together. This picture is of the underneath of the workbench. Note the 4 holes in the middle are the leftover of an attempt to use a fifth wheel. That created more instability than support and was removed. 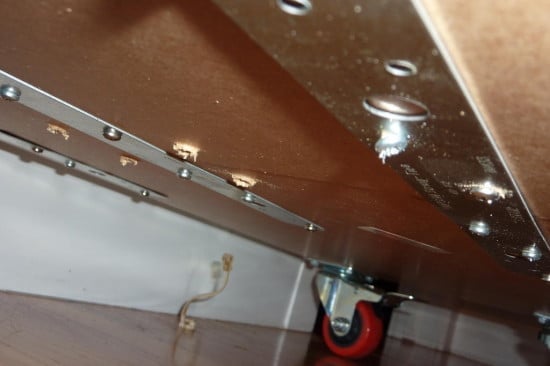 5. Time to flip it again. Apply the brakes. Now screw into the top middle joint a little mending plate. Paint it white for better looks but once the counter is up it’s not very visible. 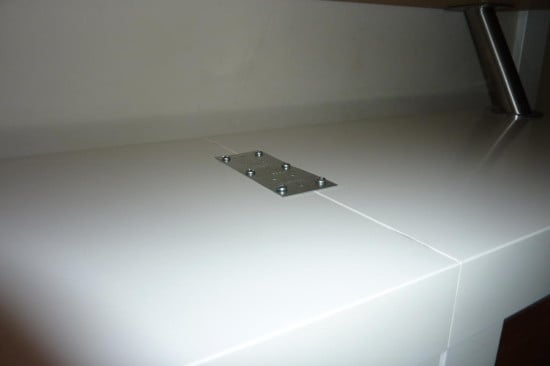 6. For the top surface you’ll need to make holes for the capita screws. You can’t stay at the very edge edge, you need to stay at least 4 cm in. In reality you have to factor in the need for a washer underneath and some wrench work room. I went in 6 cm and I regret it somewhat. Capita comes with handy plastic disks which are going to help distributing the pulling force. I forgot to add their diameter. So in reality 8cm would have been the cleanest solution. I went medieval on the disks with a Dremel tool. [see picture] 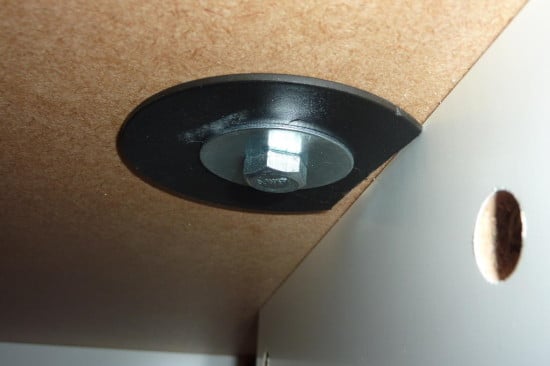 7. So now you have measured and marked where the four capita are going to land. Take a drill to the top of the Ullriks. I used an 11mm drill bit but before that I used two intermediate sizes to drill the pilot holes.

8. The capita screws are too short for the thickness of the Ullrik. Buy 4 replacement screws. This might change depending on where you live and what screw size Ikea uses. Here in the US I needed four 3/8″ x 3″ bolts. Now grab a hammer and hammer out the original screw from the chrome disks you are supposed to mount the capita on. They are welded in three points. 2 bricks as supports, a hammer and some elbow grease and you are done in 5 minutes. You can toss the original bolts.

9. File off the leftover welding from the disks (which now look like supersized washers), this will make your life easier when screwing in the bolts.

10. Mount the 4 Capita in position, but don’t over-tighten, you need them off soon.

11. Put your Linmon on top. Position it where you want it. In my case it is not centered,  it’s actually offset on one side, since I wanted to have extra legroom if I use a stool and also wanted the main body piece to stand closer to the wall. [See Pic] 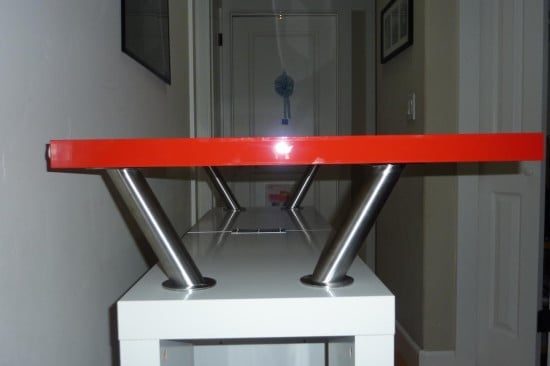 12. With a pencil mark the inside of the holes where the capita makes contact with the Linmon.

14. Remove your Capita legs. And now screw them into the Linmon with the 16 screws provided by Ikea in the Capita boxes.

15. Now place the Linmon (with the Capita legs attached) on top of your Ullricks.

16. If you worked well, the holes will align with the legs, put in your bolts from underneath and don’t forget the metal “ring” and the plastic one which came with the Capita.

17. Tighten the 4 bolts but don’t go ballistic. The inside of the top surface is made with honeycomb cardboard. I would also not use a powertool to do this.

That’s it. Enjoy you bright red counter  which will take you back to the 70s and which in my opinion looks great together with a white Expedit with red drawers and cabinets.