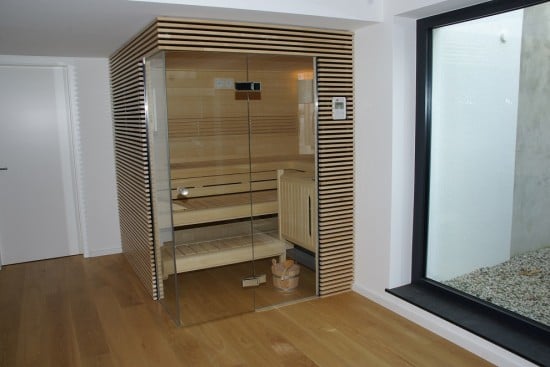 We recently had a sauna put in the cellar but were unhappy with the “rustic” look of the traditional wooden cladding because it didn’t really fit in with the rest of the house which is very modern. 4 Mandal headboards, some black carpet and black paint later it looked like this!

The carpet was cut to size and attached to the outside of the sauna using an electric tacker. The metal bars on the back of the headboards were then removed and painted black so they wouldn’t show up against the black carpet background. Extra holes (approx. two per bar) were then drilled into the metal bars. The wooden slats were cut to the right length before being reattached to the metal bars. The ones at the top were additionally cut to a 45° angle where they meet at the top corner. The headboards were then screwed onto the outside of the sauna via the additional holes made in the bars. The screws then got a little dab of black paint so they’re not visible on the black background.

A bit fiddly but well worth it!