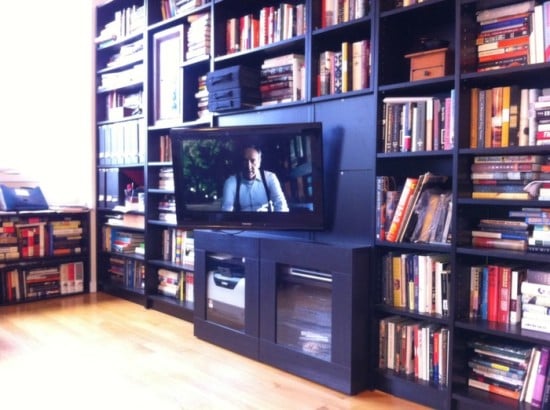 Our NYC apartment has a living/dining room with a recessed wall (11.5″ deep, perfect for Billy shelves!). I wanted to mount the TV to the structure in a way that allowed for more shelving above the TV and entertainment center. The Billy height extension units have a much sturdier back than the regular shelves, and they combine with the Besta shelf unit to match the height of a single tall Billy shelf perfectly. After lots of sketches and combos, and a talk with my construction biz brother about safely reinforcing the TV mount, I came up with this.

1. Assemble the Billy bookcases and Besta shelf (leave the back off of the Besta) and slide them into place against the wall to confirm that everything will fit. I’d failed to account for the baseboards in my original measurements, so I had to combine two bookcases using the drill techniques in this amazing Ikea Hack. I made sure an electrical outlet was accessible through the back of the Besta shelf.

3. Remove the Billy extensions and pull the Besta shelf out from the wall so that you can work all around it. 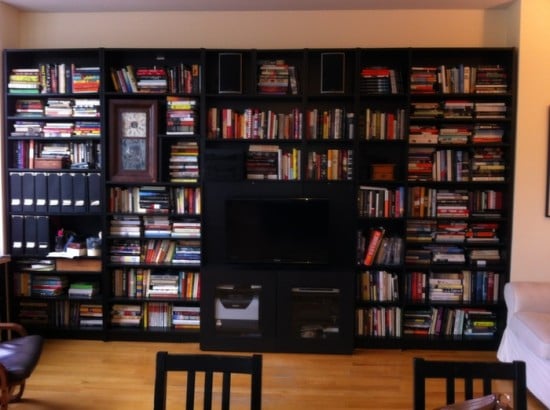 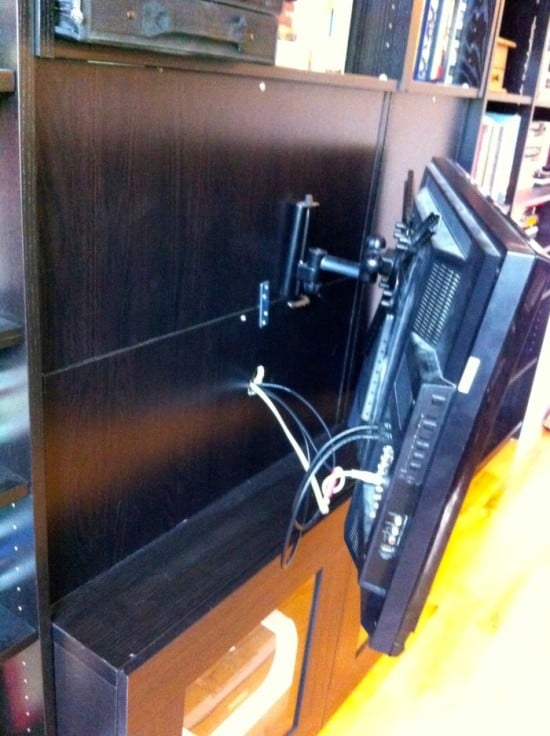 6. To install your TV mounting hardware into this “wall,” you will need to reinforce the Billy extension backing with something else, like a hefty block of scrap wood from the hardware store (I used 2×4). Your TV mount should screw into this reinforcement, which will be invisible on the “shelf” side of your Billy extension.

7. Drill a hole for TV wires. I did a test run with all of our electronics to make sure the hole was large enough for the cables we wanted to plug into the TV.

8. Push the Besta shelf and Billy extension assembly back into place against the real wall, and use two L-brackets to anchor it to the wall. This is very important, since the weight of the TV can cause the Billy extensions to topple forward otherwise.

9. Assemble the rest of your Billy extensions. For those that will go on top of the TV mount, you may need to drill new cam holes to make these extensions flush with the Billy bookcases on either side. I anchored each row of of Billy extensions to the wall, just to be safe. I also placed a flat bracket behind the TV to keep the Billy extension backs from bowing.

11. For the clock embellishment, I used L-brackets and spare shelves to create a little mini-shelf. The rest of the spare shelves are stored behind the books.