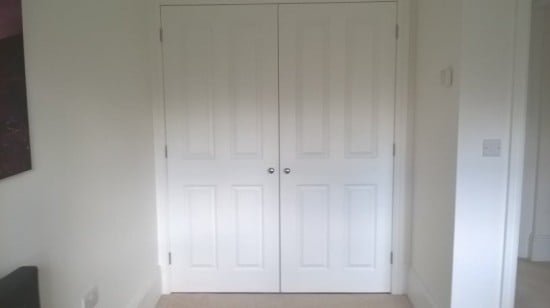 I moved into my flat in January of last year. A disappointment was that the master bedroom had a large walk in wardobe that wasn’t actually that practical. A large shelf was at the top of it and a rail underneath it. The shelf was too far up to be useful and space was used very poorly as a result. It’s a very common thing that housebuilders in the UK do but not very practical.

Initially I bought a set of Algot drawers and had this installed in the space underneath for 10 months but it was always going to be a temporary measure. I’ve used Pax a lot before so wanted to make something more bespoke.

The wardrobe itself is 1.73m across the back and around 600mm deep but the limitation is the size of the double door opening: 1.51m wide x 1.96m high. I accepted some customisation would be needed.

I bought a pair of 2.01m x 0.75m x 0.58m Pax frames and reduced the height by 68mm. The size of the reduction was necessitated by the positions of the mounting holes on the verticals. I’ve basically attached the top panel into the holes where the bottom panel would normally go should the panel be inverted. The size shrink is not that much of a loss of space given that it isn’t that usable at that height.

I stripped out the original shelf and rail from the wardrobe and reused part of the shelf to form an intermediate piece of woodwork onto which the back of the Pax frames could be screwed. I then had to take one of the wardrobe doors off so that I could put the two wardrobe frames in as a test fitting. 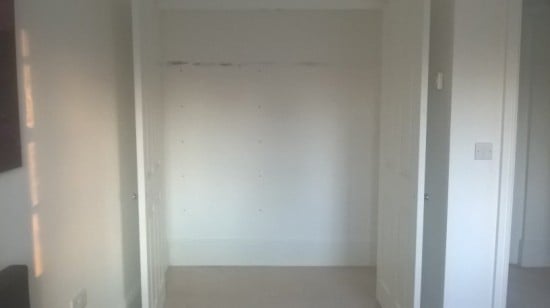 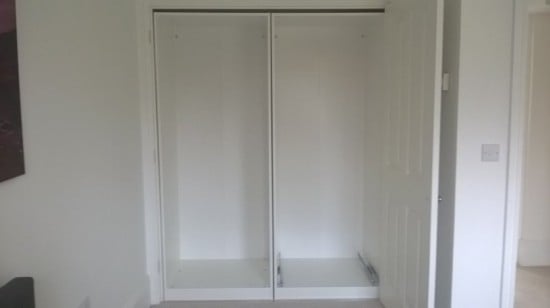 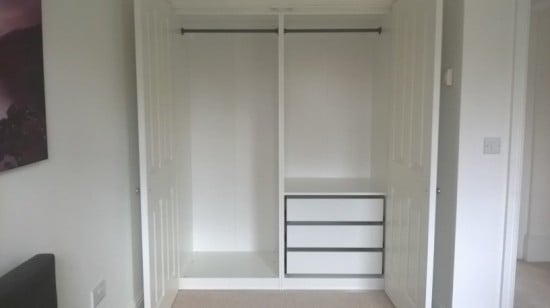 I wanted to have the two frames fitting flush for looks but also so that there would be enough clearance for the drawers to open correctly when the doors were open. I therefore packed out each side with small pieces of hardboard cut off from the reduced height Pax backpanel to fill the 5mm gap on each side. This also allowed me to cut screw the frames together and also to the back and the sides so that the structure is totally rigid. I used a set square and a spirit level to ensure the frame was arranged properly. The top gap I had to fill with a 24mm wide strip of wood cut from the old wardrobe shelf that I had taken out. I then went around the gaps with silicone sealant.

I then fitted it out with 3 Komplement drawers, 2 rails, a shelf and a multipurpose hanging rail. Total cost was £170 and all completed in around 12 hours by one person. I’m very pleased with the result.

To improve it I would like to swap the original wardrobe door handles with something better at some point – they look a bit cheap and old fashioned. Also I can do a bit better filling up the gaps at the edges and might look to find something better than the original magnetic catches for the doors.