We want to share our slanted ceiling closet hack.

Back story: My parents were redoing the master bedroom in their house and wanted a new wardrobe.

They have a lot of space lost in the room under the eaves. So, I came up with a design for a highly modified IKEA PAX slanted ceiling closet. It needs to fit under the eaves on a 3m long wall.

This is the slanted ceiling gap to fill:

How to make a slanted ceiling closet

So 4 PAX cabinets would fit, having to be cut down to fit the sloped ceiling with the height at the front being around 1.8m.

We cut down the material for the frames with a circular saw. It was mostly done over 2 days as each panel was different. We had to do a lot of designing so that the strength was kept at the top of the wardrobe.

The top panel was kept into three, a top section that the doors would run on, a diagonal section that would be on the 45 degree slope and a vertical piece on the back.

There was also a lot of trouble aligning everything as the floor. The walls and slanted roof were not entirely planar. Therefore, each piece had to be modified a bit to suit so that the doors would correctly align.

Here are 4 frames assembled for a test fitting of the slanted ceiling closet: 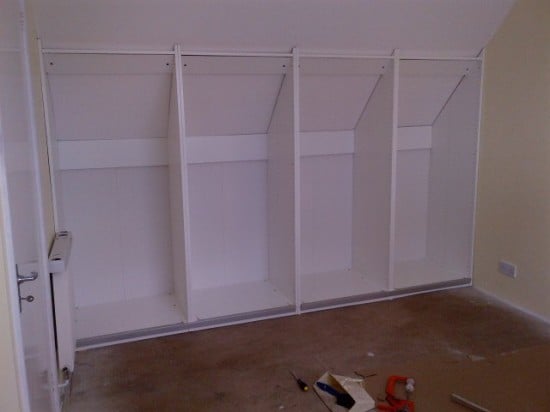 Yes, there are a few panel gaps in the picture but these were resolved with a bit of adjustment and caulk after the positioning was fixed.

Installing the doors to our slanted ceiling closet

The doors were a major undertaking.  We used 2 pairs of PAX sliding door frames but rather than use the 2.01m version, we used the 2.36m version.

The reason: 3 quarters of 2.36m is 1.77m which is the height required.  These PAX sliding doors now have 3 panels per door, not four!

To do this the aluminium extrusions of the verticals had to be cut down by 581mm.  I used a jigsaw to do this but a mitre saw would be more suitable if I had access to one.

We cut slots and holes precisely into the vertical sections to enable the doors to be assembled in their new form.  The effect is surprisingly effective as the aluminium is quite easy to work with.

The edging strips used for the ends of the wardrobes had to be cut down also to the correct length.

Related: A luxurious loft storage hack that’s anything but ordinary 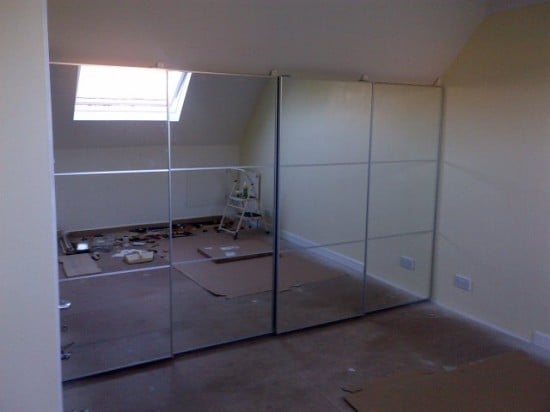 The interior has 4 KOMPLEMENT rails and a mixture of KOMPLEMENT drawers in 3 of the frames.  We’ve yet to fully finish the room.  (The wardrobe needed to go in before the carpet). So there are still a few things to be finished off.

This was a really big job.  Not only did it cost around £900, it was a challenging design. (Even with 2 civil engineers, a chemical engineer and a physicist building it! Such imprecise units as centimetres and inches were banned. Only millimetres were allowed!) We took 5 days to build between 4 people. In total, around 100 hours of work.

Our slanted ceiling wardrobe does however perfectly fit the space available and works really well.  I would strongly suggest anyone else brave enough to give this a go!