Hemnes (Car) Stereo for my Kids

My wife and I had been wanting to get our kids a stereo for their room so that they could listen to CDs by themselves. Most of the cheap CD players on the market are of the top load variety. That would be fine for my 5 year old daughter, but I could see that my 2 year old son would most likely break the lid or damage the laser pretty quickly. A front load CD player would be more child proof, but sadly they don’t seem to make any for home use. Meanwhile, the RCD-210 CD player from my VW Polo was gathering dust on the shelf in the garage . . .

Around 4 or 5 years ago, we purchased a Hemnes changing table. The change table attachment was removed a while back when my son outgrew it, but the remaining dresser was still in use in their bedroom. I never really liked the open shelf, but it did seem to be perfect for my stereo project. Time to shop for the missing components:

I also used some scrap particle board, some of which was from some unused Besta shelves. In addition, I had spare wire and various bits and pieces from past projects, including an unused USB charger.

Starting with the spare drawer front that I had picked up for €6 in the scrap section at Ikea, I cut it down to size, measured the locations for the speakers, and broke in my new hole saw and drill press. I then used some paper and cardboard to create the template for the somewhat trapezoidal stereo opening. Once I was confident that the template was correct, I taped it to the front board and cut it out with my jigsaw. After some additional sanding to get the opening to be just right, I then focused on the speaker enclosures.

I used my circular saw to cut the particle board into the necessary pieces for the speaker enclosures. Using an old framing clamp, my drill, and some wood glue, I screwed together the boxes and temporarily left the backs off. I used the L-brackets to attach the enclosures to the back of the front panel and then sealed any gaps with some caulk that I had lying around. I then drilled a hole in the side of each enclosure to allow speaker wire to pass through. 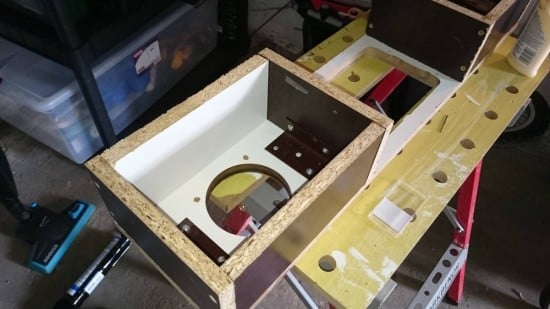 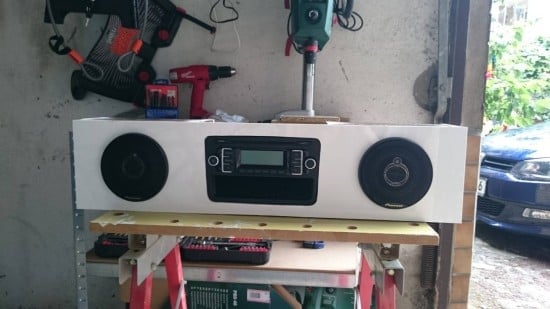 Prior to attaching the stereo itself to the wooden panel, I prepared the wiring harness by soldering all of the necessary connections and attaching the various plugs. The stereo was then screwed to the back of the panel, and then bench tested to ensure that everything was working properly. 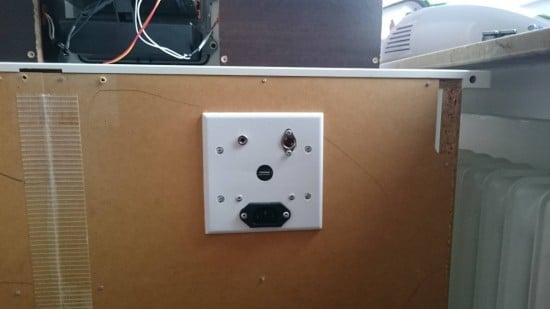 Before taking the stereo to the kids room, I had to prepare the connections panel. I used a double blank outlet cover from the US to mount the 3.5 mm stereo jack, antenna jack, power socket, and USB charger. This was accomplished using my drill, a Dremel tool, pop rivets, and plastic adhesive. I then hacked a square hole into the back of the Hemnes and screwed the panel to the back.

Finally, I slide the stereo and speakers into the Hemnes and plugged everything in. Fortunately, the width of the front panel was just right, which means that it is snug enough to remain in place without having insert screws from the side.

The kids love it, and even my 2 year old knows how to insert CDs and turn everything on. Happy kids, happy wife, and happy dad. Now on to the next project . . . 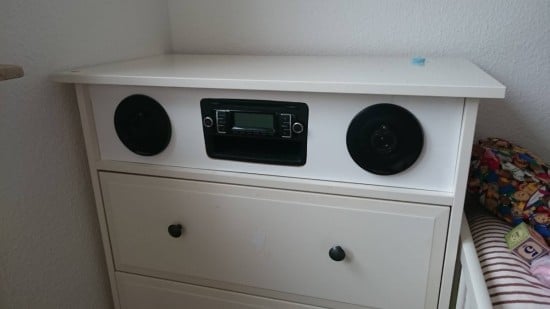