freshly papered back for your ikea bookshelf

kelly bought an ikea markor bookcase from craigslist but it came without a back. but never fear, craftiness to the cure. and kelly is spot on – adding color and pattern to the back of bookshelves, closets and wardrobes are all the rage now.

“i had been wanting [a bookcase] for awhile, as it’s much prettier than the stack of milk crates we’ve had in the office for the past year holding my crap. at any rate, the bookcase was in good condition, but it didn’t have a back. so i took the opportunity to get crafty and i glued some paper from paper-source (of course) to some posterboard i had. 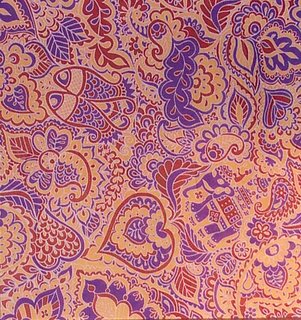 ikea markor with papered back and close up of paper pattern

i did learn a little crafty lesson on this one: pva glue is a bit heavy for gluing paper to posterboard. alas, i should have used the ever-brilliant this to that for gluing advice. for ‘an absolutely wrinkle free result’, i should have used ‘yamato sticking paste‘. i also could have used 3M 77 spray adhesive, but i have had spray adhesive disasters in the past (don’t ask), so i probably would not have done that. i had pva, so i used it. the whole thing got really wrinkly.

fortunately for me, it was one of those all-too-rare crafty projects where, even though it’s just about the sloppiest thing i could have possibly done, it didn’t make a damned bit of difference… because you can’t. even. tell. i LOVE that!

also, i think i would recommend using a slightly stronger back – perhaps a thicker cardboard. i had posterboard on hand, so that’s what i used. oh, and i used a staple gun to attach the back, but those little ikea nails would do too.” link.