i received this email from ehsan asking for hacking advice or suggestions. he has a pretty well thought out ikea media unit hack and has even photoshopped how it could possibly turn out. but has some doubts that needs clearing.

“i wish to combine two lack shelving units to make a media storage for my new tv (which i have yet to buy) and av equipment.

i am buying a 46″ lcd tv soon, and while my current ikea kaxas tv bench could hold it, i have nowhere to put the center speaker (right now it rests on top of the tv). if i could wall-mount that would solve everything but i can’t, so i need to make a stand that can hold the tv, plus the center speaker beneath it, plus some other large av components.

this is a photoshopped depiction of my idea. 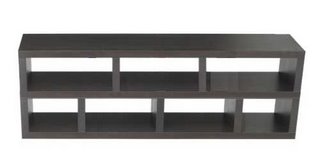 the main modifications i need to do:

what I am concerned about, and hoping you or your readers might be able to give advice on:

if i end up attempting this i will be sure to document it and share my results.” – ehsan

phew! this is quite a project. my guess, and it is purely a guess, is that it will hold the weight if you position the center uprights in places where it has to bear the highest load. so if your tv base can somehow spread across the two uprights below, it may just hold.

as for what’s inside lack, your guess is as good as mine. matt in his hack did reposition his center upright further in and it was okay.

for a tall unit loaded with heavy (and expensive equipment), i would not recommend castors. and i totally agree that your version looks better than just stacking a lack on top of another.

i’ve already reserved a spot for you on this site, should you attempt this. all the best, ehsan.

and now over to you peeps, any suggestions / advice / cautions?