Looking for a huge workshape? Here’s one at 8′

Mary wanted a big workspace, similar to a drafting space that she could put against a wall and use as a desk, sewing table, and all around multi-purpose workspace. Here’s what she did, combining some old (non Ikea furniture) with Ikea legs and a kitchen countertop. She says, “I also wanted there to be a gap between the desktop and the base cabinets so I could use the space as extra storage. I tend to have piles of paper on my desk and I wanted to be able to tuck them away neatly without actually putting them in a drawer or cabinet. I had some old West Elm modular storage furniture already so I decided to use these as the base. 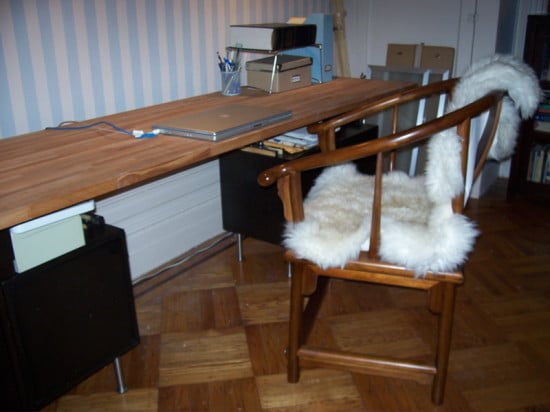 – I took four of the square cabinet components (used in two sets) fastened each set together in the back and added extra re-enforcement to the bottom of both by hammering an extra board beneath each set. Then I added four 6″ ikea capita legs to the bottom of each set. – Then I used the 2 feet from the base of the West Elm storage unit and mounted them to the center and top of each West Elm cabinet set I had already put together. – To create the gap, I used another eight 6″ ikea capita legs (four for each cabinet set) and added them to the top of the cabinets. The only problem was that the Ikea legs were 6″ and the West Elm base feet that I had used were seven. So I had some extra strips of wood lying around (almost 1′” thick) and screwed these into the top of the cabinets first, then screwed the Ikea legs on top of the 1″ strips of wood to make the required 7″ inches. – My super (incidentally named ‘Angel’) was kind enough to help me lift the 55lb slab of 8 foot woodblock (Ikea pronomen countertop) on to the entire contraption so it rested lightly on the Ikea legs. I used the hardware that came with the countertop to attach the desktop to the West Elm base feet attached to the cabinet. This way the Ikea countertop was firmly attached to the base West Elm cabinets and resting on top of the Ikea legs along the length of the cabinets. So it’s stable but difficult to move but that’s ok since it’s 8′ long and I have no desire to move it. It took me almost a full day. 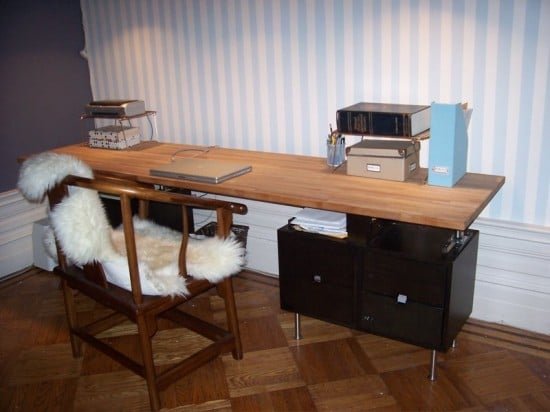 Oh, also… (to give credit where credit is due) the wall behind the desk is blue and white paint striped from a posting I saw on apartmenttherapy.com (link corrected). The hanging pendant lamps I made according to a hack posted right here (thank you thank you) out of Ikea cutlery containers, and light sockets. And the chair covering is also an Ikea sheepskin throw rug.”