She says, “I had an old white Vika Amon tabletop with square wooden legs (which they no longer seem to sell, can’t find them on the site). It had spent a few years as a desk and then a few more as a dining table, and was getting ugly – deep scratches, and the finish was flaking off. So I did the following to it.

Before:
(Note the preparatory drawings on the left – and the chair on the right, which is an old Ivar chair whose bottom was cracked, so I upholstered it with an old pair of jeans. Oh yes, and I did ‘hack’ the table slightly – one leg has been moved in to make it easier to sit on the bench.) 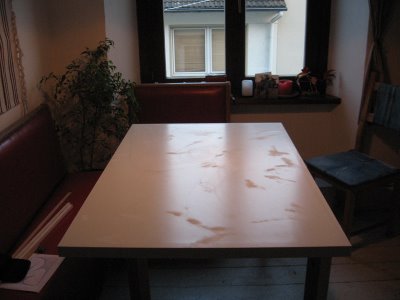 After:
Here it is in its full glory! 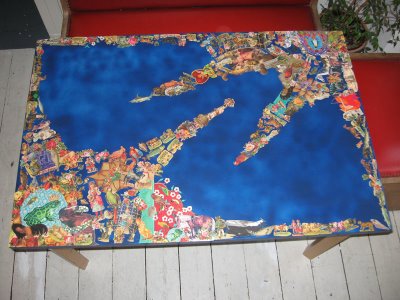 Getting there:
1. Painted it blue with spray paint for a slightly cloudy effect. 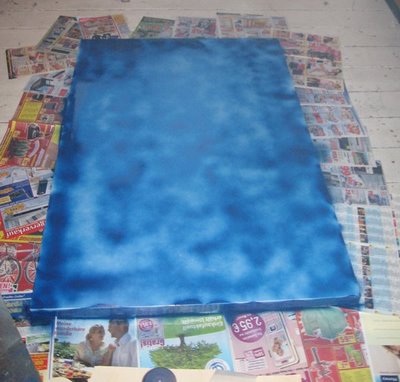 2. Cut out lots and lots of pictures and arranged them according to my guides, drawn on the (dry) paint with chalk – a few from magazines, and some postcards, but mostly those glossy ones kids have collected since about the dawn of time. (Had fun shopping for them!) 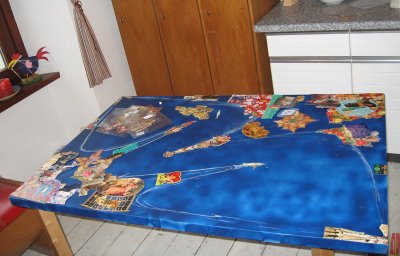 3. Glued the pictures down with regular white wood glue diluted with a bit of water – press them down with a very slightly damp sponge so they won’t curl up! The magazine paper is really too thin, it wrinkles up hopelessly. 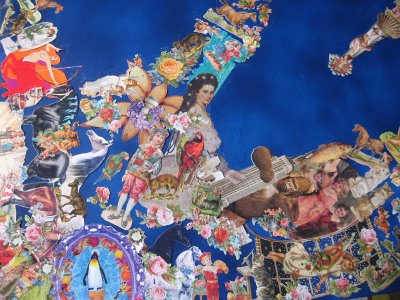 4. Covered the whole thing with 5 layers of polyurethane varnish, letting them dry about 12 hours in between (and a week before using the table!) 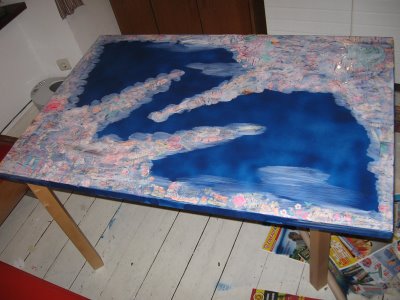 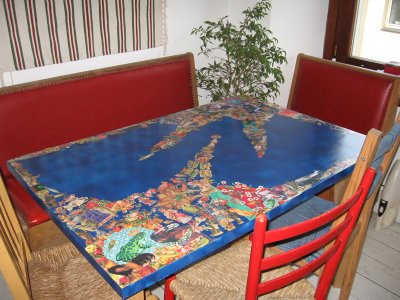 Took me an entire weekend, but I think it was well worth it! Visiting children love it. (The adults spend quite a while looking at it, too) Any more of this thing in the place would be a kitsch overload, of course, but within reason… I even took one of the pictures, straightened it out, and use it for wallpaper on my laptop. One of my professors thought it was a Klimt. Thanks to the varnish, spills are no problem, though I’ve not tested its heat resistance yet!”