I do agree with Peter. That the Stockholm TV stand looks great but is a little impractical. Well, unless you think of it as a couch potato buster. No just pointing your remote. You gotta get up and open the doors first.

He says, “My wife really wanted the Stockholm TV stand, but I wasn’t willing to pay over $400 (Cdn) for the thing, especially when the doors would have to be open all the time in order to control the PVR and other devices. Well imagine her excitement when she found a slightly damaged one in As-Is for only $180. The only problem was that one of doors was broken and a leg or two had some slight damage. Well, the damaged legs got moved to the back and undamaged ones to the front.

Next I bought some glass door hardware from Home Depot for $5 and had some bronze coloured glass cut for another $50. Drilled a couple holes in the TV stand and shazzam! we both got what we wanted at half the price and we think it is even better than the original!” 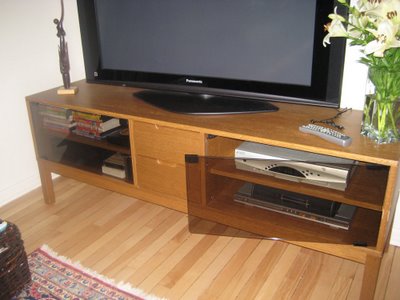