Waste not the flatpack boxes

Simona and Flavius put the flatpack packaging to good use.

The idea occurred to me me when we returned from Ikea with several packages and after mounting the Expedits we really didn’t know what to do with the cardboard packages, since the recycling center was far, far away and we wouldn’t want to simply throw them out in the garbage bin (we try to be as eco-friendly as possible). Another thing was the we found the plastic boxes in Ikea a bit expensive and somehow ugly.

So I just started measuring the shelf and the cardboard, drawing lines, cutting and glueing together the pieces and I produced some boxes that fit perfectly. For an impeccable straight edge, use a wood panel to bend the cardboard after you’ve measured twice, of course. As for the glue, I used standard water-based cardboard glue, non-toxic for pets.

For the decoration, I went to the local DIY store and bought rolls of wallpaper to cover the boxes. I chose black with white stripes for the bedroom and the living room and stone patterns for the kitchen, to match the floor tiles. The final touch with adding various style handles so the boxes can be pulled out easily – you can also use chains for the handles or ribbons. 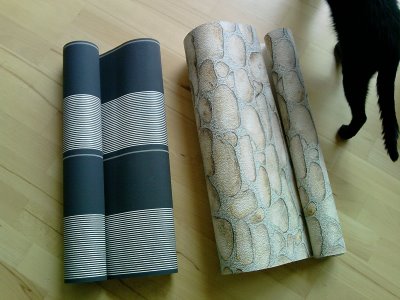 As there still are some cubes to be filled in the Expedits, we also use cardboard boxes from the mineral water that we usually buy and basically any box that enters our household. Just to state the obvious: I used the sturdier boxes made of the TV box for storing cans and jars and the less sturdier cardboard to store paper, bags and not so heavy items.

Pros: cheap, eco-friendly, easy to make, good looking (or so we think)
Cons: they are not as sturdy as plastic and they are not catproof – our cats already destroyed one by scratching, but I just made a new one.

Here are some pictures with the results for the living room – where we use the Expedit as a TV stand and the one in the kitchen – we don’t really cook so we don’t have a proper kitchen yet but we still need some storage space. 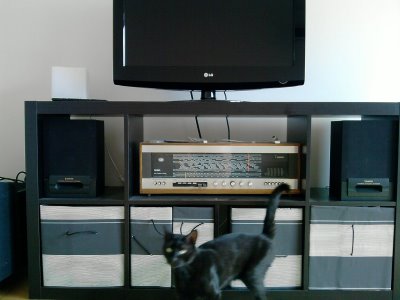 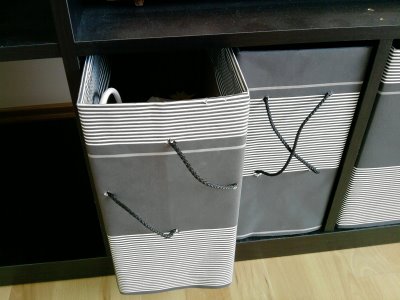 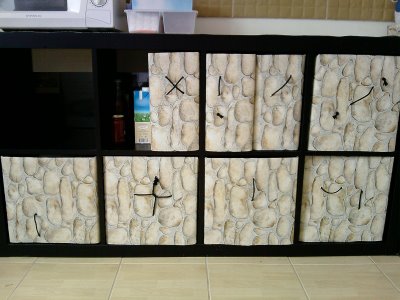 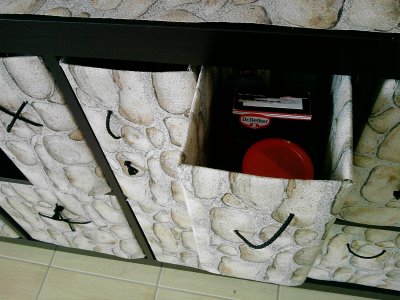