A mobile wardrobe. How about that? Liz goes nomading with an Albert rack, which kind of looks like a Gorm, yet not quite.

“I hacked the Albert rack, or whatever this type of thing is called in English. My Ikea-hack is incredibly simple. It involves hacking two Albert racks/shelves into one closet. The reason behind my hack is my lifestyle, which is somewhat of an urban nomad. My whole life needs to fit into the back of a car or two – in the last picture of my room you see about half of the stuff I own (in volume). My furniture needs to take up as little space as possible and be easy to assemble and disassemble. I suppose I could get one of those telescope racks and hang all of my clothing in it, but I’m more of a folding rather than a hanging type and plus, I’m just really a sucker for wood. So off to Ikea I was (one could actually build this from scratch but it turns out raw materials cost more than these racks). There I found Albert racks, which take up next to no space when completely disassembled. Purrrfect. 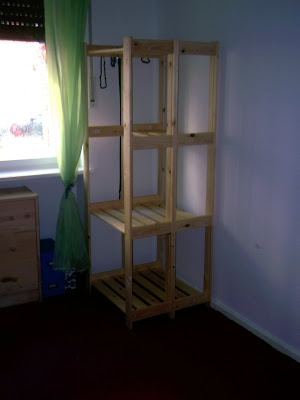 The top shelf of the rack consists of 3 boards. I took the middle board and sawed it in two along the length axis. For this, I picked a board with as little dark spots as possible to ensure maximum construction strength. This (half) board became the bar on which to hang all the clothing that needs to hang. I decided to sandpaper it “sometime later”, but normally that would have to be done as well. Then, I left out 3 boards from the second from the top shelf (but left the side boards for structural integrity). I assembled the shelf in accordance with the Ikea manual from there on, and then, I assembled another (entirely in accordance with the manual) and put the two racks together with screws in 8 places. 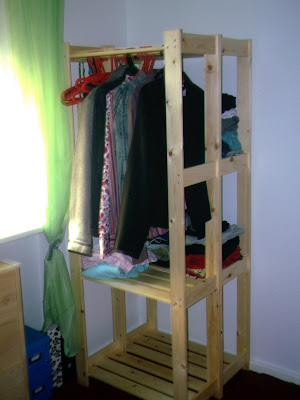 As you can see on the pictures, I also added some simple hooks attached by screws on one of the sides in order to hang jewelry and belts from them. An automatic screwdriver is going to be your best friend for this project by the way, unless you really dig blisters. The careful reader will realize that this assembly method left me with three and a half boards which went unused. I used them elsewhere, but one could make an extra shelf in the closet out of those if one wanted to. Say, to hold Kasett (or any other kind of) boxes for the socks and the underwear. Mine are actually in the drawer beside the closet, so I didn’t need it. In the pictures, you can see the resulting top shelf of the closet viewed from below and from above, the closet when it’s empty, and how I use the space. The width of the Albert rack was enough to hang my hanging-required clothing when all of it is clean (in the pictures, half of my button-down shirts were in the laundry). Originally, I wanted to fill the bottom shelf with heavy boxes to keep the closet from tumbling over (I’m renting so drilling walls isn’t a very good idea), but it turns out the whole construction is stable even when top-heavy, so now I can put something else there, like boxes with shoes. Nomad lifestyle or not, I have fifteen pair or so anyway and stuffing them under the bed isn’t very feng-shui. Not to mention, my sport sneakers are basically a chemical weapon and shouldn’t be anywhere near sleeping people.” 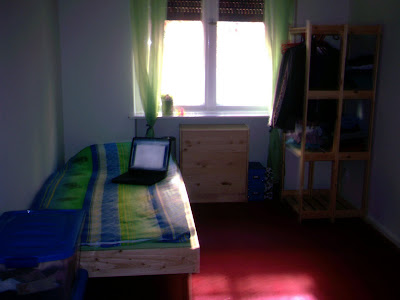