Framing up your entertainment center

This is a pretty interesting entertainment set up from Tien. The frame does “hold” the ensemble together and makes an eye-catching wall feature. And the Chinese opera faces is a nice touch.

“I just wanted to show you my Ikea hack now that it’s all done. I wanted a simple, uncluttered system. Luckily, I only have a few components. Here’s a breakdown of what I used:

1) I painted the background a glossy white, mounted the four shelves in a “pinwheel” and flipped the top one upside down so that the screw holes wouldn’t show.

2) Then I took the two table tops, attached them perpendicular to each other and mounted it directly to the wall using L-brackets. I sawed off the table legs to extend the shelf to fit the PS3 underneath.

3) On the bottom shelf and table top, I cut holes so that I could run my wiring through. I wrapped it all together with a red ribbon (my logic – if it’s going to visible, I might as well make it stand out). Though it looks like one long wire, it actually goes in and out of the box – the in is for all the power and the out is for all the sound system cables.

4) I cut pieces and spray glued it to a cheap cardboard box and hid all the cords inside.

5) Mounted vinyls.
Later on, I’ll add a laptop that will sit on the connection box that will control streaming media.” 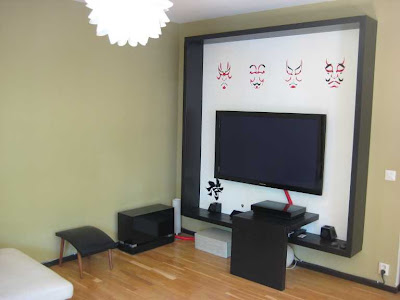 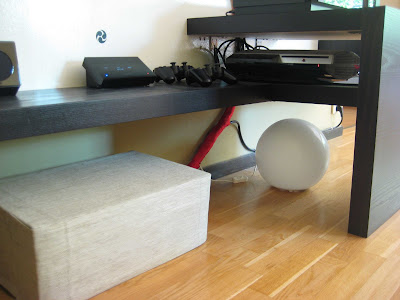 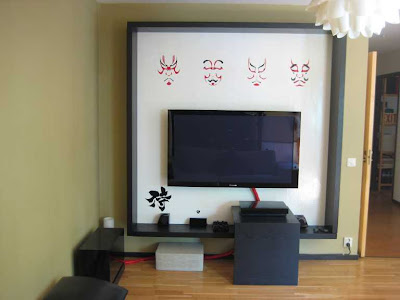