A new take on one of hackers’ favourite items, the Stolmen pole. Instead of stretching it all the way to the top, dragon_ll screws the poles to the underside of Lack shelves, which are then bolted to the wall. 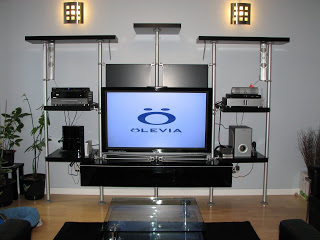 “Back Story – I wanted a TV unit to mount my 52” LCD. I liked the ones that have a back panel where you can screw the mounting bracket on and have shelf space on the side for your A/V components. Most places were expensive including Ikea … So I decided to make my own using whatever from wherever. Ikea was a great place to start as their stuff was easy to modify.

Hacking – I came across the Stolmen system that I liked a lot and it even had the back panel for the LCD TV. The problem was it was white. I needed black to match my decor.  So I searched the Ikea store for something to use as the back panels. The good thing about Ikea is that they have variety within each system… The annoying thing is that they don’t have each piece in all the colours. 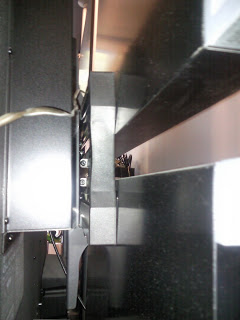 Anyways I was limited to the Lack side tables that came in black. I used 5 Stolmen posts each spaced equally apart (Lack table plus connectors).  Used 4 Lack tables to create the back panel and 2 Lack tables per side for the shelves and because my ceiling was too high I used a Lack table and shelves at the top of the posts and then screwed the stablizers from the stolmen posts to the underside of the Lack tables to the wall.  That makes it look like it’s floating. 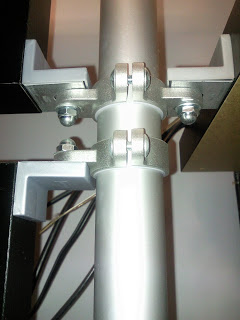 To connect the tables to the posts I used the Stolmen shelf connectors but with the standard wall hangers from any heavy shelf/wardrobe system.  Screw them into the sides (for back panels) or underneath (for shelves) and with nuts and bolts for Home Depot they attached nicely to the Stolmen connectors.  The LCD TV bracket was centered between the 4 back panels and each has 3 bolts with predrilled holes through each Lack panel for a total of 12 bolts.

Now I know the Lack tables have a semi hollow core but I knew it was strong enough.  It’s been almost 2 years holding up this 130lb LCD TV.  I later added the besta storage to the bottom to store my blurays and games (also using the Stolmen connectors and heavy duty metal angles from Home Depot).”