No hacking here, but if you have a doggie, you may appreciate the tip. And yeah, I couldn’t resist posting up the pic of Molly’s cute dog, Colonel Mustard. 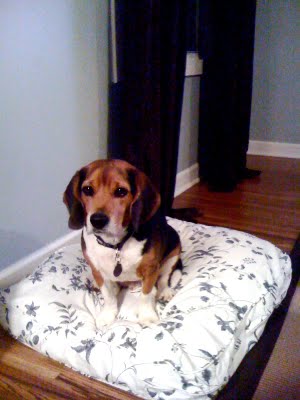 Molly shares, “After 5 years of heavy use, my Ektorp Lindalen sofabed slipcover needed to be replaced. I sprung for a new one when I bought my house, but had the old one left over and didn’t know what to do with it. I also needed a place for my beagle, Colonel Mustard, to hang out…and preferably not my newly-recovered couch.

The Colonel has had a rough time with dog beds – either he figures out how to chew them up or he ignores them. I noticed one day that his favorite place to curl up was my laundry pile, so I came up with the idea to stuff the retired cushion slipcover with old/stained/torn/worn-out clothes as well as a few old, deflated pillows. Stuffed it all in, zipped it right up, no sewing or construction needed.

It didn’t cost me a dime, it’s heavy-duty canvas, and more importantly, he LOVES it and hasn’t even tried to chew at it. I’m thinking it calms him when I’m gone because his owner’s scent is already built in by nature. But even if he ends up nibbling at it, it’s ok – I’ve got 3 more cushion covers left from the old slipcover!”