Jenise’s first hack involves 50 lbs of shoes. Here’s what she did. 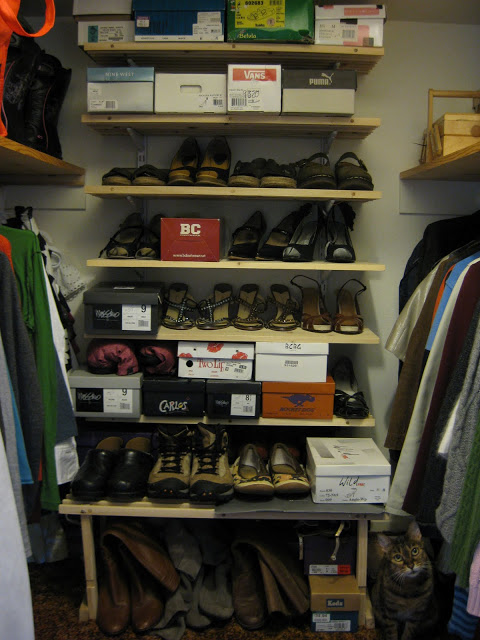 “When I moved across the country, I had 50 lbs of shoes freighted to me on Amtrack, and that was half of my collection. Since then, I have scaled back considerably.  Regardless, when I moved into my apartment that had the least spacious walk in closet (complete with orange shag covered A/C ductwork going through it), I was definitely in need of some serious shoe racks

Being a rental, I didn’t want to spend a ton.  I was having a hard time staying under $100 with the typical bracket and shelf units

sold at home stores.  Having no saw or skills in that arena, my husband and I needed pre-cut shelves too.  We found our cheap fix with the Ikea Babord, which is actually a freestanding two shelf wood shoe rack.  If I remember correctly, the Babord was ridiculously cheap at $5.

So we bought
(1) 3 Babord units, which tallied to 6 slatted shelves,
(2) the last 2 Ekby Tryggve solid wood shelves in the store (for my heels without boxes), and
(3) 12 50-cent brackets (unknown model) from Ikea.

The two wall brackets were from our local Ace hardware, which were cheaper and better quality than the Antonius units from Ikea. 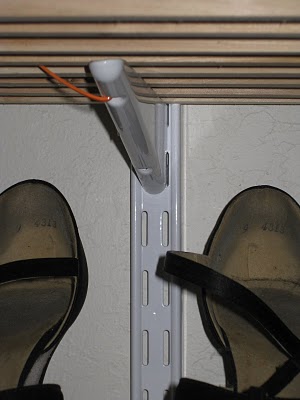 My husband rigged two of the Babord units to have only single shelves so I could fit my boots and large show boxes underneath.  The rest of the Babord shelves were attached to the brackets using plastic security ties. The 2 Ekby Tryggve solid shelves were screwed to the brackets like normal.  All in all, the total cost for my 8 shelf wooden shoe rack unit was around $30.” 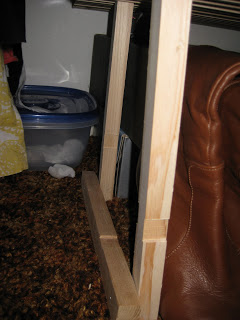