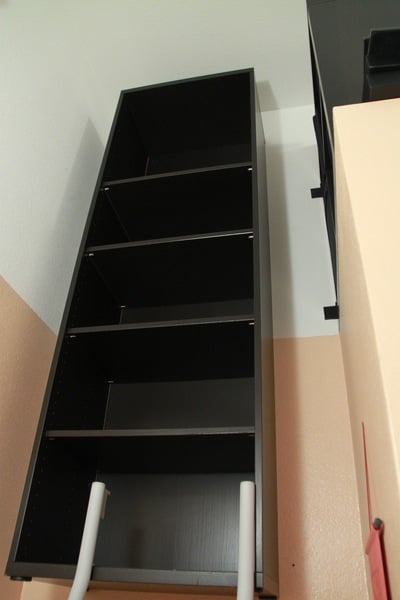 Description:
Problem
For the longest time I’ve been meaning to make use of the over head space in the stairwell of our home. With 1100 square foot of living area, space is at a premium. We keep all our books in the home office, but we don’t have enough shelf space on our bookshelves.

We decided on a full height Besta Shelf Unit to accommodate some of our books, paperwork and other things.

Next on the shopping list was the Besta Suspension Rail. It is made of aluminum and features 20 drill holes for securing it to a wall.

To get to the top part of the shelf unit we need a ladder. Ikea sells the Inreda Ladder which fits the Besta Shelf Unit.

Preparation
The instructions for the Besta Suspension Rail only depict a height extension unit. There were no load numbers in the instructions or on the website so I estimated load bearing based on prior experience. Normally, the rail is fastened to the wall with a couple of screws. Since it is supposed to suspend a full height shelf unit I doubled that and used self-drilling heavy-duty Nylon drywall anchors to hold the rail in place.

Installation
To get to the top of the over head space I used a multi-position ladder (like the Little Giant brand) fully extended. First I took measurements according to the instructions that came with the suspension rail.
Then I fastened the rail to the wall with the self-drilling drywall anchors. Next I hung the assembled Besta Shelf Unit onto the Besta Suspension Rail. This required getting on the multi-position ladder half-extended on one side to sit on a higher step and fully extended on the other to sit on a lower step in the stairwell.

Since the shelf unit is quite tall, its bottom part can still be lifted away from the wall. I used the additional plastic distancers that came with the suspension rail to fasten the bottom left and right corners to the wall using the supplied additional screws.

After a quick load test I used the Inreda ladder to get up high enough to replace the shelves inside the bookshelf and made sure I could reach all shelves all the way to the top.

Final Result
We now have an additional full height bookshelf for items we don’t need to access on a daily basis in a space in our home that wasn’t used before. 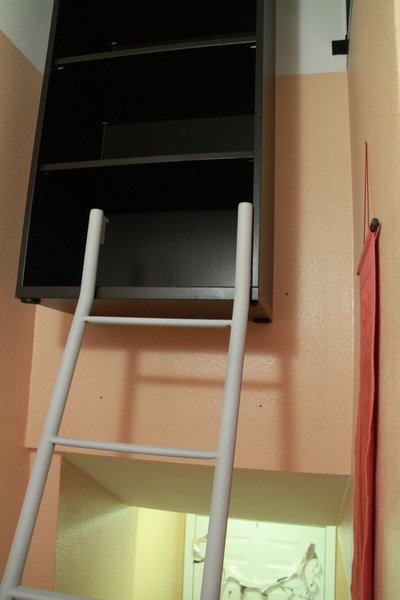 I plan on securing the Inreda ladder with a couple of simple wall hooks to the left of the bookshelf so it is out of the way yet easily accessible when needed.

CAUTION! Unless you know what you are doing, please DO NOT attempt to mount heavy furniture on the wall. ~ Jules