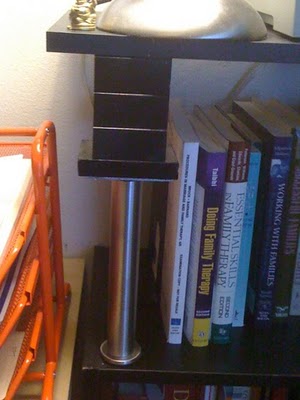 Description: I recently took a job teaching online in which I work from home, meaning I needed to convert part of my living/dining room into a home office. My biggest problems were accommodating my extensive library of academic books, and finding space for easily-accessed office supplies.

The 28-inch wide (non-IKEA) bookshelves near my dining table, which is now my primary workspace, were only two shelves high. After filling them with books and stacking another row on top, I realized there was still plenty of room above the top row of books if only I had free-standing shelves (or, as I came to think of them, “shelf-evators) to go over the top. I didn’t want to screw anything into my walls; I wanted something to rest on top of the bookshelves. I asked the employees at IKEA who said they didn’t have anything suitable, but had sometimes used Capita legs and single wall shelves to make something similar for a display.

Ekby Viktor shelves were the obvious choice, since their dimensions were very close to the dimensions of my existing shelves, and they were cheap, only $5.99 each. The problem was that Capita legs are a maximum of 8 inches tall, whereas many of my books were 10 or 11 inches tall. I decided to find something in the as-is bins that I could use to increase the height of the legs before adding the shelves on top.

I found the perfect thing – two Ekby Joxa rails, essentially strips of 1×1 already painted black, marked at $2.50 each. Add two packs of 8-inch Capita legs at $14 each, and some Gorilla wood glue

from the hardware store, and I had my hack ready to go. 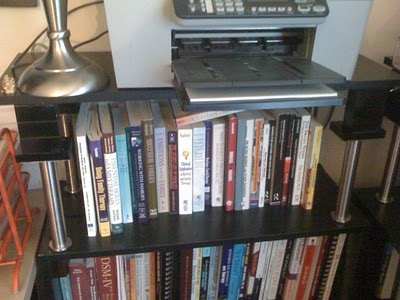 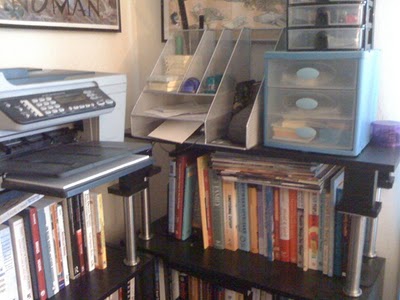 I hit a snag when I got home and realized that the screw plates for the Capita legs were wider than the Joxa rail. Had I realized this at the store, I would have picked up a shelf of some kind from as-is; however I happened to have one of unknown provenance in my tool bin, exiled there when it didn’t find a use after I moved a year ago. This is why I save things.

My biggest limitation was my tools, basically a jigsaw and a c-clamp for holding the work on my kitchen counter. That’s as good as it gets in my apartment. I marked and cut rectangles from the spare shelf to match the Capita screw plates, approximately 2″ x 3.5″. A few of the edges were less than perfect but I could put the most obvious defects toward the back. I sanded the edges by hand to remove rough spots, spray-painted them black on my sun porch, and when they were dry, marked and drilled pilot holes for the screws that came with the Capita legs. Easy enough.

Cutting the Joxa rail was much harder because it was solid wood rather than particle board. I originally wanted to cut 3.5″ lengths to match the length of the screw plates, but I realized to raise the Viktor shelves 3 inches, I would need 24 pieces out of the two rails (3 pieces per corner, times 4 corners, times 2 shelves) and I came up a few inches short. I decided to cut the pieces at 3 inches and center them over the Capitas.

As I said, cutting the Joxa with just a hand-held jigsaw was very difficult. I was trying to use a finer-toothed blade in order to minimize splitting on the back side of the cut but this slowed the work down as well. In the end, I had 24 pieces, but I quickly realized the ends were nowhere near square.

I decided to punt and ask for help from a friend who works at a job where there is an excellent wood shop. The night before, I sorted the Joxa chunks into triads that more or less matched, then glued them together using the Gorilla glue. After letting them dry about 24 hours, I took them to my friend’s wood shop where she set up a jig on her chop saw and squared off the end of each triad. Back home, I gave them a couple of coats of black spraypaint (turns out I didn’t need to buy black railing since painting couldn’t be avoided).

A day later, I assembled the legs and their risers. The Capita legs were screwed into the bits of scrap shelving, and then I glued the Joxa blocks to each leg flush with the front edge of the screw plate, centered right to left. When they were all glued, I left all 8 legs upright with both Viktor shelves balanced on top and weighted down slightly to prevent any possibility of shifting while the glue dried.

The next day my shelf-evators were ready to go! Each fit perfectly on the bookshelf below, and only required minimal height adjustments to the Capita legs using the built-in screw mechanism to get them to sit level. One shelf-evator now holds my printer and lamp, while the other holds various desk and office-supply organizers.