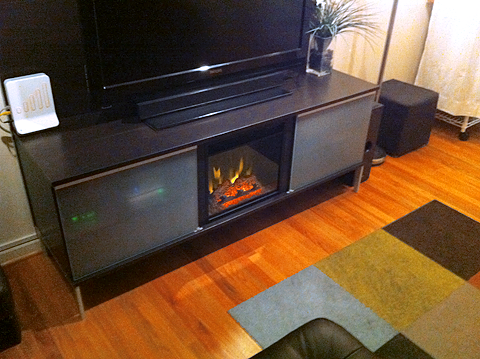 Description: Recently, while perusing my local big-box hardware store, I found an entertainment center with a built-in electric fireplace. It was pretty awesome. I don’t have a fireplace, so I’m enamored over even fake flames.

The styling of the center wasn’t exactly perfect, however. No way could it replace my Tobo. Yet, I wondered if I could make something similar by taking out the Tobo’s center drawers whose gaps have always bothered me.

After removing the hardware, I took some measurements, and went online. I found a few options that would work, but decided on an 18″ ClassicFlame at Mantels Direct because of the timer feature and the remote. It was around $250 with free shipping. 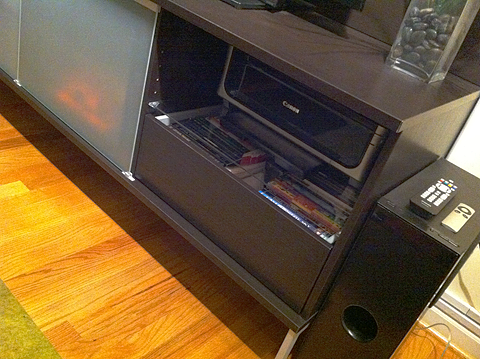 Height-wise, the unit fits exactly with less than 0.25 inch to spare. Width-wise it was short by about 1.75 inches on either side. To compensate, I trimmed-in the fireplace with the Tobo’s two wood stops (found below glass shelves) which I ripped down on a table saw.

I was able to re-install the drawers on the sides by creating a template and drilling new holes for the slides. I can now see what’s inside the drawers… especially in the backs, which had been a problem.

Relatively speaking, this was a simple hack, and the result looks as if it was designed this way to begin with. Tobo++.