Ribba to the rescue!

Description: I just moved and couldn’t find any power strips when setting up all my AV stuff so I just used extension cords until I could get more power strips. The mess of wires has been bugging me no end, but even worse was the morass of cords behind all the units! Mere power strips would not fix that rat’s nest!

I didn’t want to cut holes in the back of my Danish teak buffet since I will probably someday use it for something other than a TV stand. What to do? Then I got the brilliant idea of using a Ribba picture ledge in back of the buffet to rest the power strips and bundled cords on so that nothing was drooping onto the floor.

First I cut holes in the Ribba for the power strip cords to go through, since my outlet was below where the Ribba would have to go. You may not have to do this, but if you do, just drill four pilot holes with a 3/8″ bit, then cut from one to the next with a keyhole saw (about $7 at Lowe’s). These do not have to be neat and clean since you will never see them again once the wires are in place. 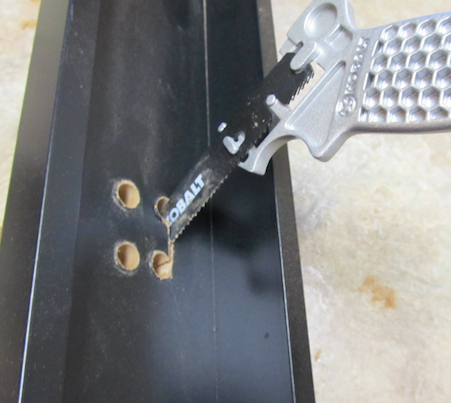 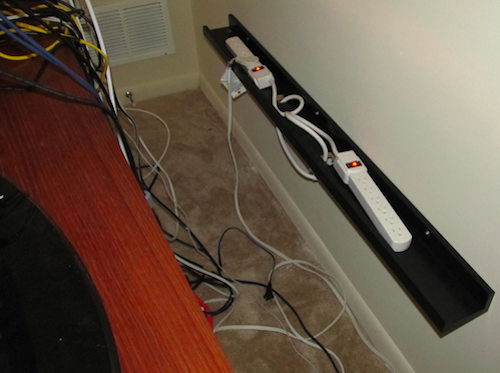 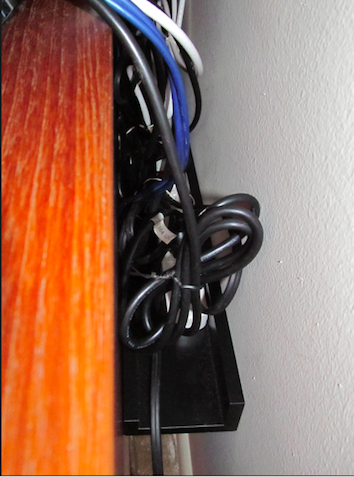 Mount the shelf on the wall. It doesn’t even have to be level! Thread the power strip cords through the holes and rest the strips on the Ribba. (I used two just in I might need more outlets later.)

Next, I untangled the wires and bundled up the slack on each as neatly as possible and secured it with twist ties. Then I placed each bundle on the Ribba.

I pushed the buffet back in place and voila! No more mess!

The bundled cords still look a bit untidy if you make the effort to look behind the TV when passing by, but I don’t have any reason to even glance back there so who cares! The only cord that I can’t do anything about is the white cable TV cord that you see on the floor on the left, but I’m ok with that. I’m just thrilled that everything else is out of sight and out of mind.