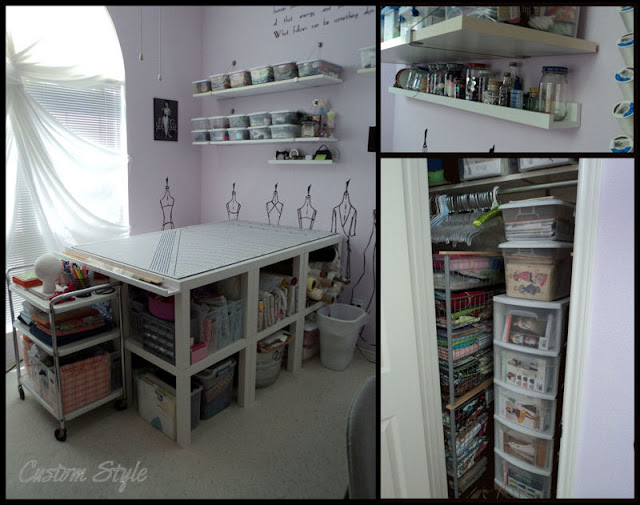 Description: Long before I ever discovered IKEAhackers.net, I actually did some IKEA hacking of my own in my sewing room. (I’ve since seen similar hacks but not exactly the same.) And this is how I did it:

I bought 12 white LACK tables and my husband and I assembled all of them according to the instructions. We turned half of the tables over and drilled 2 holes in the bottom of each leg (opposite corners of the square leg). In each hole, we either glued a wooden peg (leftover from other IKEA projects) or a small dowel-rod segment.

Once the glue was dry, we balanced one pegged table on top of an unaltered LACK and marked were the pegs touched the surface of the lower table’s top. Then we drilled holes where we marked, put some glue on the pegs, and pushed the two tables together (using a rubber mallet when necessary).

Eventually, we had 6 double stacked tables. (And they were really easy to get through the doorway!) The stacks were then arranged 2 by 3 where I wanted them in the room, and I used strips of sew-on Velcro around the center legs to keep the tables flush with each other on the top surface.

I covered the table with a store-bought cardboard cutting board and I keep it from sliding around with scraps of leftover STOPP anti-slip rug underlay (also from IKEA).

The unplanned bonus of the hack was the “shelf” that was created with the bottom layer of tables. I suddenly had places to pile my fabric tubes and bolts, and some large plastic bins fit in the “cubbies” on the floor.

Recently, I purchased a couple of RIBBA picture ledges to use on my sewing room wall as shelves for tiny jars, ribbon spools, and other miscellaneous tools. 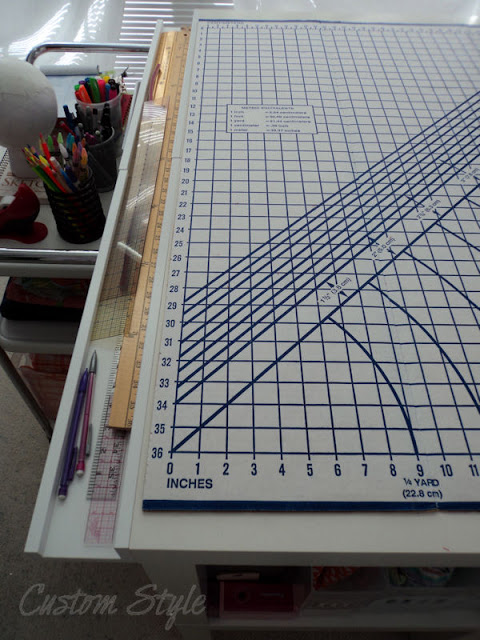 A few days after hanging them on the wall, I realized that they would be the perfect width for holding my rulers – which I have never been able to find a home for or keep from burying under my projects. I measured the small ledge already hanging on my wall and it was exactly the same width and height as a LACK tabletop! I can’t believe I didn’t think of it before! The RIBBA picture ledge is practically made for the LACK!

So I bought two more small RIBBAs and marked and drilled the necessary holes on the sides of my cutting table. (In retrospect, it would have been much easier to mark the holes by lining up the RIBBA with the legless tabletop on the floor, if I hadn’t already built the table years ago.) Then I attached the ledges with 3″ drywall screws and moved my rulers into their new home. I quickly discovered the ledge also makes a good pencil tray.

The other major sewing room hack is in the closet where I store most of my fabric and some of my patterns. It used to be a major disaster!

Basically, we turned the ANTONIUS drawer frames 90° so that the wire drawers slide out, with the wider side of the drawer in the front. By reorienting the frame design, the closet holds 16 drawers, maximizing the use of space with two towers facing each other. And I can still pull a basket drawer completely out of the closet when I need to go through it. The hack turned out to be more complicated than I expected, so I had to recruit my husband’s coworker to shorten the drawer frame pieces. (At work he has access to power tools I don’t have at home – like the steel-cutting kind.) 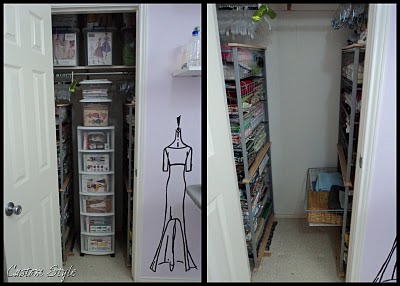 I’m sure with more time, I could have figured out a better way to execute the project, but it’s installed and it works, so I’m happy.

I roll the plastic drawer tower out to access the IKEA wire drawers.