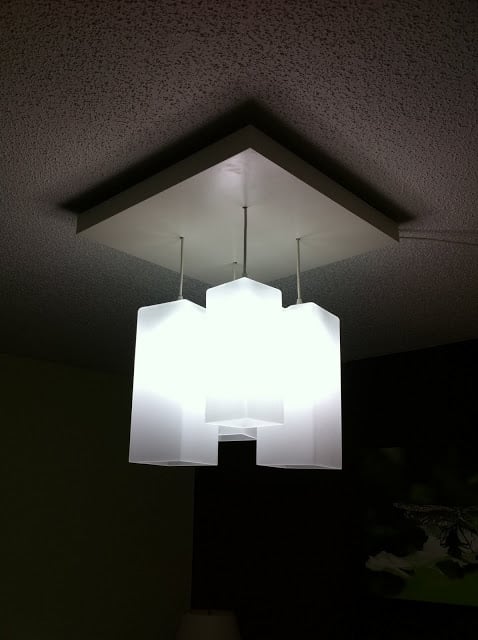 Description: I had a dilemma in the condo we just bought: the builder for whatever reason had designed the bedrooms without any overhead junction box to allow for an overhead light.  There are light switches available on the wall that work one outlet in the room but traditional ‘swag’ style lamps don’t really appeal to me, so…I built one myself.

I’m sure that an easier option would be to simply buy any overhead light, get a cord kit and modify it to plug in to the wall, but then it wouldn’t be a fun IKEA creation. 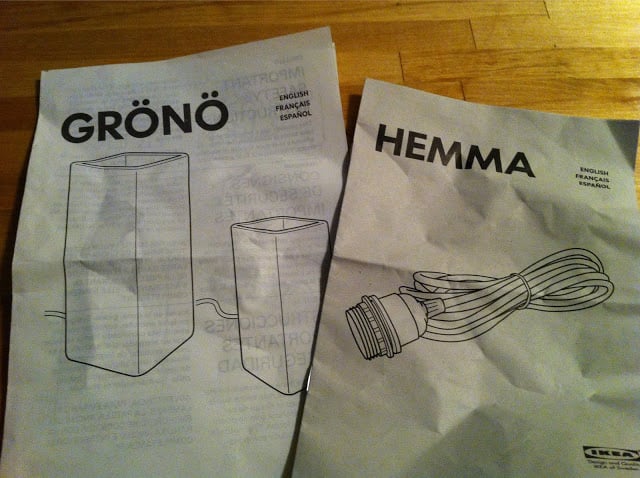 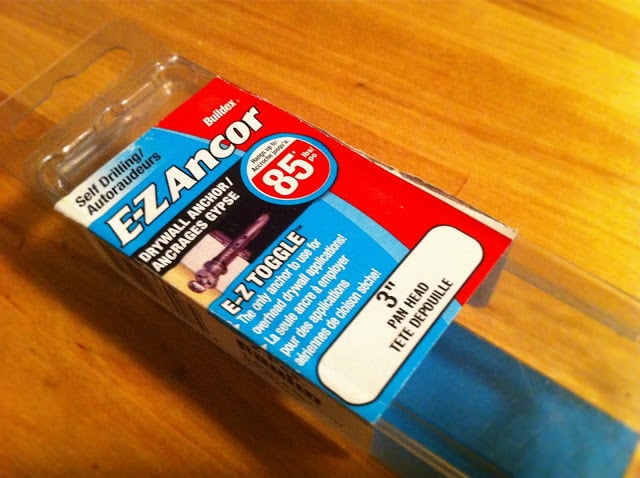 I used the table top of the Lack side table for my ceiling mounted base (since this is a swag light a cord needs to hang out of it down the wall to get power, and as this vision ends with 4 separate hanging lights, I also needed a way to hide the gathered and spliced cords).

I then sat the empty Grönö glass squares on the upside down table top in the same location I wanted them to hang down. To mark where the cords would hang I took a marker and dotted in the center of the holes on the Lack table and drilled through with a bit that was a bit wider than the Hemma cords. 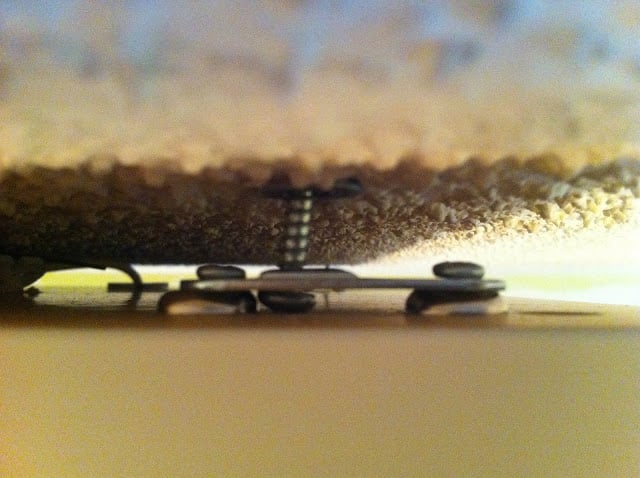 I cut each of the Hemma cords about a foot and a half from the light socket and fed them through the holes in the Lack table (since I have around 8ft. ceilings and this was hanging over the bed I couldnt let it hang too far down, the cord only hangs about 6in, but better to have a bit of extra cord than not enough), if you wanted it to hang longer a fifth Hemma cord may be a good idea so you have the most length possible in the swag cord.

I then spliced the cords together along with one of the plug ends (yay now I won’t need to have 4 swag cords, I combined them all into 1 which is a bit less obtrusive), I stripped the long plug cord wires to leave a couple of inches exposed for both white and black wires, and stripped an inch for the socket cords, each of which I wrapped around the plug cord, soldiered and taped (white to white and taped, and black to black and taped separately) — wired in ‘parallel’ NOT in ‘series’ which would have dimmed the lights.

On the unfinished side of the lack table (which goes against the ceiling) I screwed In my keyhole brackets with washers underneath to raise them enough for the screw heads in the ceiling to slide in and under to mount it (make sure they all go the same direction!). I measured a few times to make sure that I screwed in the drywall anchors to the ceiling perfectly to match the table brackets. When the screw is screwed into these anchors, I left an inch protruding from the ceiling and slid the light fixture onto the screw heads.

Now attach the glass cubes, screw in your bulbs (I used CFLs just to be sure I didnt force too much wattage down the wire with 4 bulbs instead of the one it was meant for) 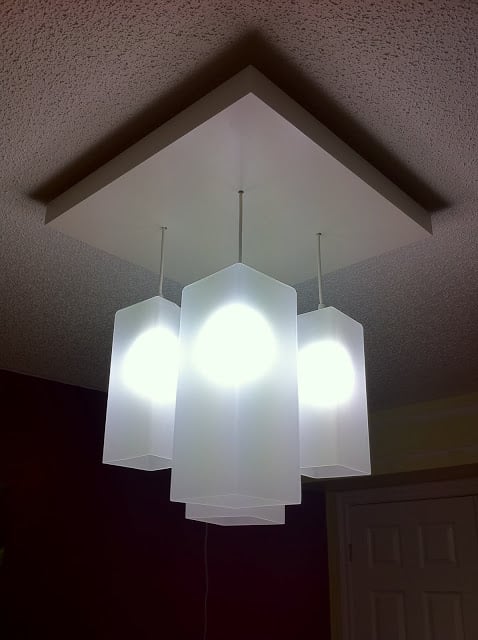 Note: I had to let the glass cubes weigh on the cords for a week or so before they settled into an untwisted state, and I could finally straighten out the cubes to the angles I wanted.