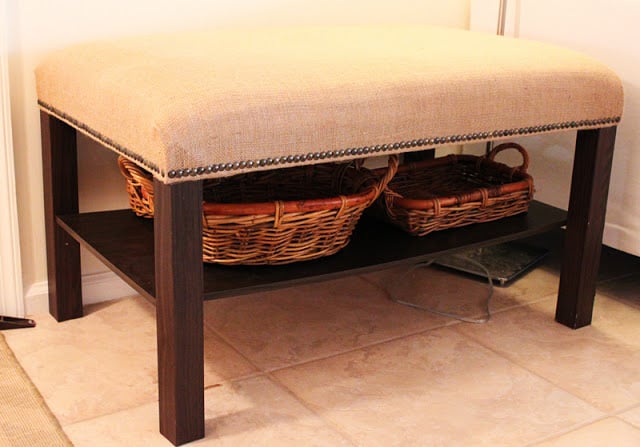 Description: I recently finished building a larger coffee table and I had the standby Ikea Lack one sitting in a corner, useless and ugly. My husband didn’t want me to throw it out, because he hates waste, so I perused Ikeahackers and few others websites for ideas. He had also asked for a place to put his shoes near the door, and a bench to put them on. I decided to kill two birds with one Ikea Hack.

I bought the cheapest twin foam top I could find. Then, I purchased the burlap, muslin and upholstery nails at a local fabric store. (FWIW, I’ve used a couple of upholstery nails brands and Dritz is the best brand I’ve found in the local DIY shops.) Both burlap and muslin are cheap! I actually preferred the cheapest muslin they had because it matched the burlap so much better than the more refined and bleached ones. For less than $20, I had all I needed.

First, I took the legs and bottom shelf off the table and set those aside. I cut the twin foam top into three separate sections and I glued the first section to the top of the table. Then I proceeded to glue the other two sections to the first one. This resulted in a very soft, very puffy top. I cleaned up the sides with my scissors and very lightly trimmed the top of the corners to slightly round the edges. You don’t have to do this last step, but it doesn’t hurt as long as you don’t go overboard.

I draped the muslin over the foam and turned the whole thing upside down. Then with my trusty staple gun, I proceeded to staple the muslin over the foam, pulling tightly and evenly. Pulling tightly and evenly is the trick to making the foam look clean. The tighter you pull, the more rounded and clean the edges will look. Because I was doing a second layer with the burlap, I didn’t take the time to make the corners neat with the muslin. It turned out OK, but in hindsight that was an unnecessarily risky thing to do. It’s best to fold the corners almost like you do with wrapping a present. See image. If the fold is on the actual corner it will literally “disappear” from the eye. 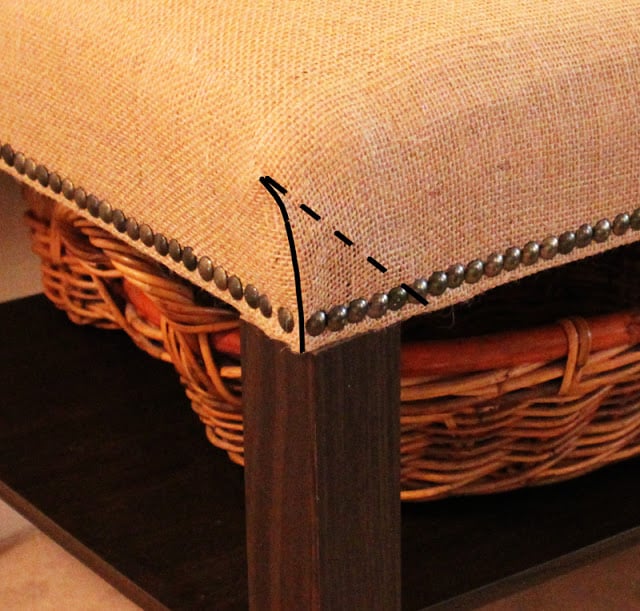 After I finished stapling the muslin, I turned it back over to inspect the shape of the foam. A few extra staples ensured it all looked even with no “pull” marks. Then, I draped the burlap over it and flipped it back over. Using the same process I stapled the burlap – pulling tightly and evenly. (One note: I like to fold the fabric over to form a seam. This way it won’t unravel later on.)

Once done, I put the legs back on. I found the hole with a nail and screwed the legs back on in no time. After that it was just a matter of finishing it off with the decorative nails. This took the most time and was tedious work, but it really finished the look of the bench in my opinion. A tack hammer you can pick up for $6 at your local hardware store is a must have if you’re going to be working with decorative nails at all. A regular hammer destroys them – trust me. The final step was adding the shelf back on. I did that last because I didn’t want it to get in my way, as I hammered in the upholstery nails.

Overall, I’m really happy with it. I will eventually pick up some flat, shallow baskets to complete the shoe storage. For now it is perfectly functional and adds some much-needed (and easily moved) emergency seating to our living room.

See more of the Farmhouse Bench.