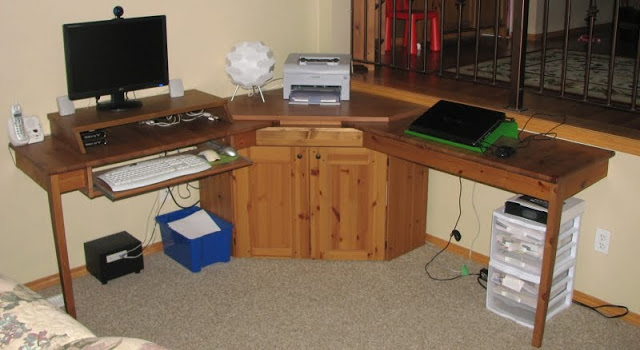 Description: We love Ikea ‘antique’ stain items, but they unfortunately don’t make any corner computer desks that look nice in this stain.

So, to make this desk… 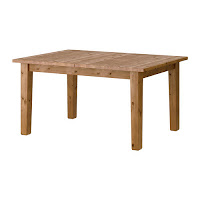 1. Acquire an Ikea Kitchen table (unfortunately, I don’t know the name of this one) on Kijiji for cheap. I already had a (disassembled) Alve computer armoire and Diktad change table.

2. Cut the kitchen table in half. This will form the two ‘desk’ parts of our corner desk.

a. The boards immediately under the table top (those on the side) will also need to be cut in half.

b. Keep one leg for each half (the ‘outside’ leg) — reattach these legs to the table halves.

c. Attach the table halves to the wall (this is a ‘built-in’ desk) 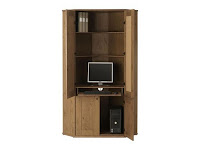 3. Take apart the ‘Alve’ computer armoire (OK, I did this first 😉

4. Take the sides of the Alve, cut them (height-wise) down to fit under the kitchen table halves. Attach these at the other end of the kitchen table (i.e., opposite the remaining legs). You now have the desk self-supporting.

5. Take the top-plate from the ‘Alve’ computer armoire and attach it across the two table-ends as the ‘corner’ section of the desk.

6. Reattach the bottom doors from the front of the ‘Alve’ computer armoire (using the original hardware). I had to cut down the doors to size, and had to redrill the holes for the hardware, but otherwise it wasn’t too hard. 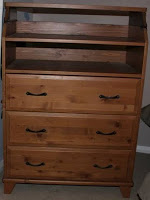 7. Use the shelves from the ‘Alve’ computer armoire — the side-pieces that you cut down originally still have all of the peg holes present, and you can simply put the pegs for holding the shelves in and drop the shelves on top.

8. Take the fold-down part of the Diktad change table, and drop it in as a monitor stand.

After this it’s small cleanup stuff — a few extra boards above the doors to finish things off.