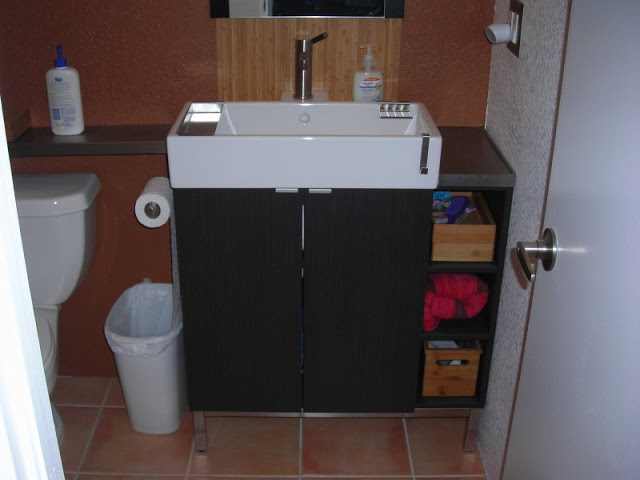 Description: I had enough room for the 31″ Lillangen vanity, but wanted more shelf/counter space instead of such a wide sink. I also wanted to put it right up against the wall in the corner of the bathroom. I had the idea of combining a 31″ base (24″ cabinet plus 2 end units) with the 24″ sink to leave room for a little countertop next to the sink in the corner against the wall.

The first part of the hack was that I stacked two of the Lillangen end units front-to-back instead of kitty-corner, to give deep storage cubbies on the “wall” side of the base cabinet. This involved leaving out the one of the vertical panels of the front unit — after a little experimentation, I found that it worked just right to discard the side panel and use the back panel on the side instead. By drilling some new holes in edges of the back unit, you can use the cam locks to attach the front unit to the back one instead of to the discarded panel.

The interior shelves in the front unit would ordinarily be attached at one side and the back; to make up for the missing panel, I drilled more holes and put two screws into each shelf from the cabinet side, so that they are supported by both sides rather than side and back. While I was at it, I also drilled a couple more holes through the cabinet side and put a screw in the top of each end unit as well, to make it all a little more secure. As you can see from the first photo, there are exposed screws on the outside of the end unit now so you probably only want to do this if you are going to put that side up against a wall, like I did, so they are not visible. 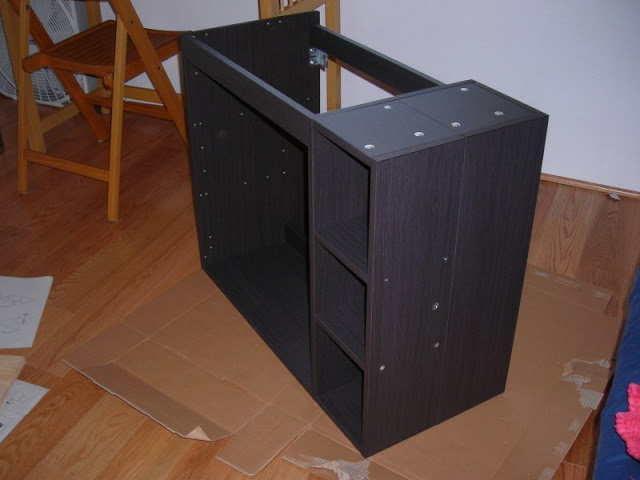 I also wanted to hide the top of the two end units under a countertop-like surface. I was considering various materials to put there (granite tile? butcher block?) before I realized that the cut-off end of the Marginal shelf I was planning to install over the toilet was exactly the right size if I put it sideways. One thing about the Marginal I didn’t realize before I bought it home…. the back edge of the shelf is unfinished particle board, and it’s also indented a bit behind the upper surface of the shelf for the recessed brackets. I thought it wouldn’t be a bad idea to seal this with a coat of oil-based primer. To fill in the indentation on the “countertop” piece I attached a thin strip of wood moulding, also primed both sides. After installing the sink and getting it caulked all around, I attached the shelf to the cabinet base with silicone adhesive, with the “back” edge of the shelf against the sink and the cut end hidden a gainst the back wall, then finished it off with a bead of caulk to hide/seal the raw edges. 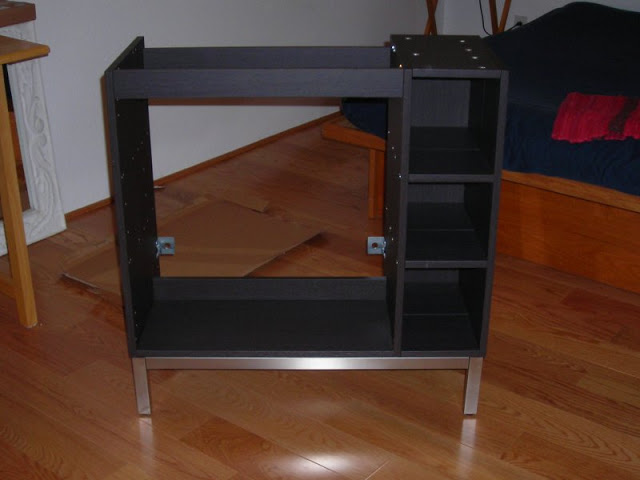 I’m quite pleased with how it turned out — there is plenty of space to set things down near the sink, and the shelf cubbies are deep enough to hold extra towels or storage boxes for toiletries. BTW, for a backsplash I’m using a $3 bamboo placemat, trimmed to fit around the bump in the rear of the sink, an idea I borrowed from another hack on this site showing Ikea placemats used for a kitchen backsplash.