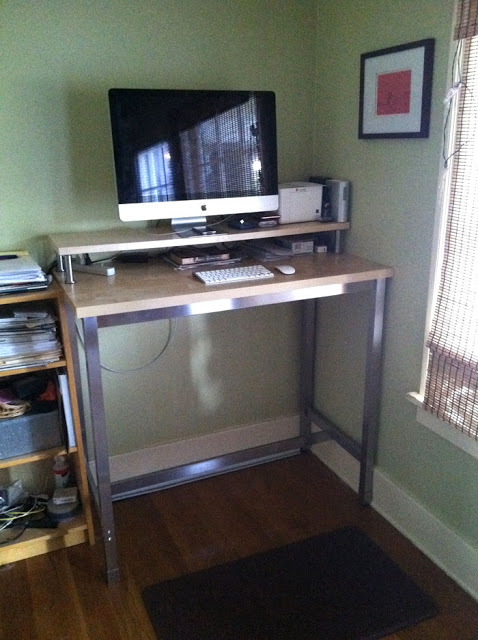 Description: I too have joined the standing desk movement and my back has never felt better.

My first attempt was to construct my own desk, inspired by several I had seen online. I made a frame out of pipe segments. It was thin, but strong, and looked really cool… except for the top.

I failed to realize that all those desks I had seen online were made by people who just happened to have that antique farm door laying around, or the perfectly sized varnished piece of vintage driftwood just sitting in the garage without purpose. I had no such thing, so I just slapped down a sheet of plywood.

I made two miscalculations– one, I decided I need storage so I added some blocks to the top and then a second sheet of plywood to make some cubby hole action. Second, I had to add feet to the whole thing so it wouldn’t gouge up my hardwood floors. The shelf and feet added a good 6 inches to my initial design. Didn’t seem like a lot, but after working at the desk for awhile I started having back and should problems. It was just too high.

I turned to Ikea Hackers for ideas on what to replace my failed construction with. I found most of the desks fell into three common categories:

1. Desks that were a bunch of things stacked on each on other. While functional, I just think it looks a little too clunky junky.

2. Great hacks using Expedit as a platform. While these all seem super functional have nice lines, they are also very HEAVY looking. My personal taste leans toward furniture that is as open as possible. I like rooms to feel spacious, even if they aren’t. Blocky furniture seems to just make a room feel smaller. Having an Expedit at waist level under my workstation didn’t feel right to me.

3. Desks using Vika tabletops. These felt like the best solution for me since the Vika comes in a lot of sizes and finishes. The problem is, the base. Most of the legs intended for these tops don’t extend as high as I would need them. The various solutions to this issue I’ve seen around seemed like they might be a little too unstable or have the same issue as #2 above.

My ultimate solution was not a hack, so much as combining the right pieces together. I discovered that the taller Utby bar table was just right for my arms– but I didn’t like the heavy, darker top design for the base.

I used a birch effect Vika on the Utby base instead. The Utby base is metallic and open, but makes use of a crossbar to actually make it as solid at home as it is on the showroom floor (which NEVER happens).

While perfect for my arms, it was not high enough for my eye to monitor line. I almost got a simple monitor shelf, but realized that there was Ekby Jarpen– same birch effect and same width as the Vika. With a set of capita legs it made for a perfect sized shelf that created storage space below, and a shelf for my monitor and hard drives above.

The end result was exactly what I wanted– simple, the right height, stable and not overly clunky/blocky.

With sales tax, and a simple Franklin stool for the end of the day when I get tired, the whole endeavor was just over $200.