Our Princess is in another castle! 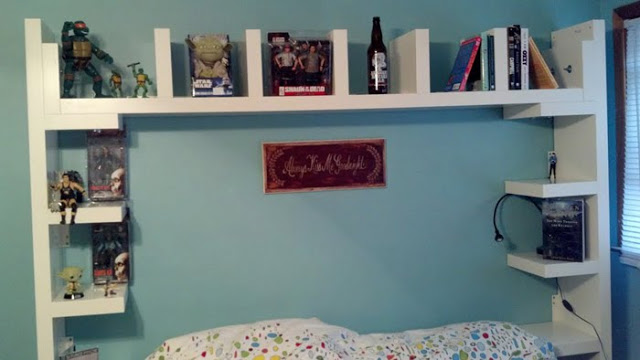 Description: Desiring shelves somewhere around the bed, and needing a night stand with some late night reading illumination, I decided to do it all at once.

Took three separate Lack shelf units, and framed the bed, which ended up looking like a castle. Considering some Mario themed decorating to come, the name was obvious.

One unit each side, shelves facing inward towards the bed (as pictured), and one laid horizontal across the top, facing “up”. The “top” and “bottom” shelves of each unit were left off.

The extra shelves were used in various locations. One on each side were used to shim the width of the assembly to fit the width of the bed, and give some symmetry to the way the top unit was laid into the (now top) shelf of the side units. These shimmed pieces were bolted to the side units via 5″ 5/16″ bolts with large fender washers via holes drilled all the way through each. Likewise the back/bottom of the top unit was bolted to the top shelf of the side units using the same bolts.

The four other extra shelves were attached together in pairs on the back unfinished side via the supplied wall brackets and screws. Used as “feet” for the unit to get the height needed to clear an electrical outlet on one side of the bed. Also to help keep the height while the whole unit was mounted to the wall also using the supplied brackets similarly as described in the instructions. The feet are then basically non functional but their placement also adds to the look and symmetry to the unit (not pictured anyways).

The piece was finished off with a color DIODER strip to provide mood lighting, on the bottom of the top (horizontal) unit.