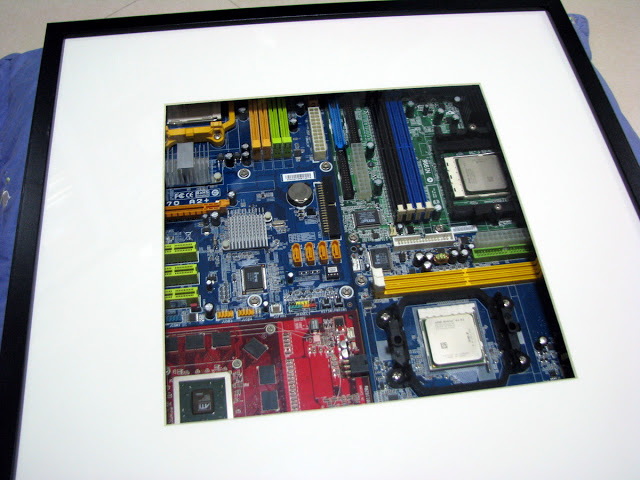 Description: I had a couple of old motherboards and PC components lying around. Since they were rather colourful and I had a plain wall to decorate, I decided to have them framed.

Unwilling to have a custom frame made for them, I headed down to Ikea where I found 520 x 520mm RIBBA frames (Article Number: 601.798.01) had a picture width of 490mm, just enough room for two ATX motherboards side by side, or 4 mATX.

Because the motherboard was thicker than the maximum 30mm depth, I had to remove the IO ports to make them fit. The thinned-down motherboards were then hot glued onto the frame. A few screw holes for fastening were also added for good measure.

As the frame was now much heavier than Ikea designed it to be, I was afraid the original clips would not hold. So I drilled four more holes were and threaded a thicker wire for hanging. Hope this inspires you to give new life to those old / non-functional PC components!

See more of the motherboard art.