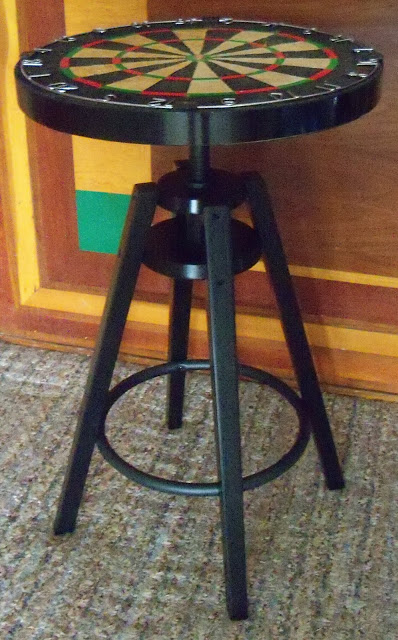 Description: My friends and I play darts at least once a week…and after about 6-9 months of playing, the board needs replacing because of all the abuse they take. Instead of throwing them away, I’ve found spots throughout my bar at home to store them… but since I was running out of space, I decided to do something about it.

One a recent trip to Ikea, I came across a Dalfred stool that looked pretty cool… and thought that it would make a great base to fashion a table out of one of the boards.

I put together the stool per the instructions, until it came time to mount the top of the stool (the part you sit on) to the metal bracket that attaches it to the spinning center shaft. Taking a 1″ hole saw (I think it was a 1″), I carefully drilled a hole almost all the way through the dart board from the back in the center, until the metal mounting plate sat flush. 5 screws were used to mount the plate to the board (just used the ones that came with the stool), and then the bracket just popped onto the spindle…

Now that my friends have seen this table, they’re all wanting one for their game rooms at home! The few things I like best about this table is that it goes with my bar room motif, it’s a great little table that can be easily moved to where it’s needed (and height adjusted if need be)…and the darts have a place to stick around while we’re inbetween games/shots.

One thing I didn’t mention was that I removed the metal grid work that defines all the separate scoring areas. I only did it because the grid was coming up in a few spots…but I think it looks good without it being that it’s a table. Plus…there was a chance that leaving it in would result in a spilled beer…and we just couldn’t let that happen.