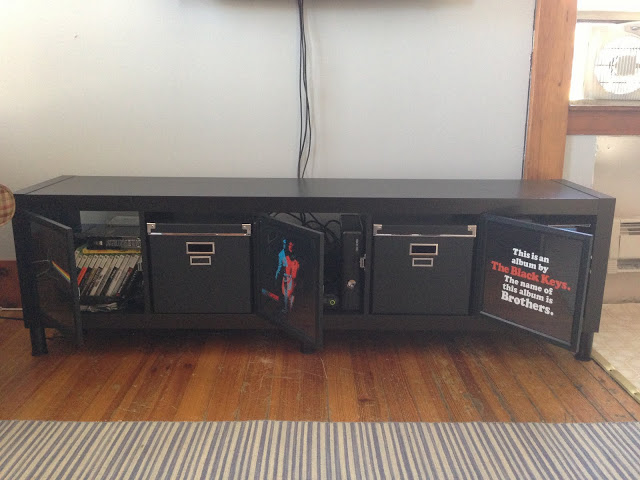 Description: I’ve wanted a de-cluttered but unique entertainment system in my living room for some time now. After I moved into my new apartment and was finally allowed to wall-mount my flat screen, I had no need for a traditional system. Enter IKEA and the Expedit line.

I wanted to use the Expedit bookshelf series for a few reasons. I really like the Rekordit door idea that was featured on Kickstarter in late January. The idea of using records as doors was just too cool. Unfortunately, during most of the construction of my system the Rekordits still weren’t available. Ironically, as I was finishing up the last steps this week I got an email saying the Rekordits are ready to purchase, but at $49/each were a little too pricey for my tastes so I found my own frames instead. That said, they look awesome and very simple to use, go for it if you have the cash. 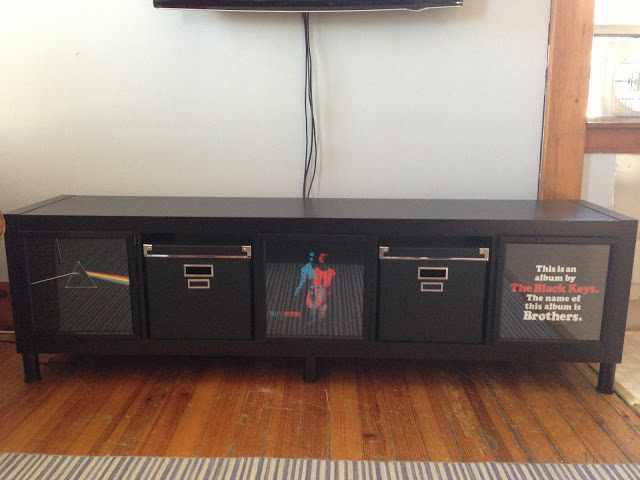 I settled on the black-brown five-cube Expedit and planned to lay it horizontally. To keep it off the floor, I also purchased three sets of the black Besta legs. Two legs were drilled into each of the outside posts as well as the middle post to give it extra support. The extra legs keep the unit from potentially sagging, especially if the system becomes a bench, which it has from time to time so far.

The trickiest part, by far, was settling on the right frame. It had to be big enough to hold a 12×12 LP album or image and completely cover an Expedit cube, but small enough that it didn’t overlap the outside of the Expedit frame. The frame border also had to be thick enough to screw hinges into it. And the icing on the cake was that the frames couldn’t be prohibitively expensive. With these requirements in mind, I settled on three 12 x 12 frames sold by Craig Frames on Amazon. I went with three (instead of five) because as I suspected, there is probably not enough clearance for the frames to swing open if placed adjacent to each other. Still, going with three frames allowed me to buy a pair of Kassetts to going in the remaining slots.

As for attaching the frames, I bought some of the smallest sets of hinges I could find as well as a few cabinets magnets to keep the doors shut. I recommend drawing every drill hole before drilling in the Expedit. Since it’s particle board under there, you don’t have too many chances to re-align the frame should any of the frames come out uneven. Remove the backing and glass of the frame while mounting it, that allows you the reach through the frame to drill it in. Also, a quick tip I’d recommend is using masking tape to hold the frame perfectly in place while you mark your drill holes.

One issue was that the frames were a tight squeeze for 12 x 12 record covers. Instead of using covers, I went and made some high quality prints of some of my favorite albums (just using a Google Image search). The total for three prints was less than $10. That allowed me to find album covers that match the wood and give me future flexibility to change the images around on a budget. Though, the album covers up there now look pretty awesome.