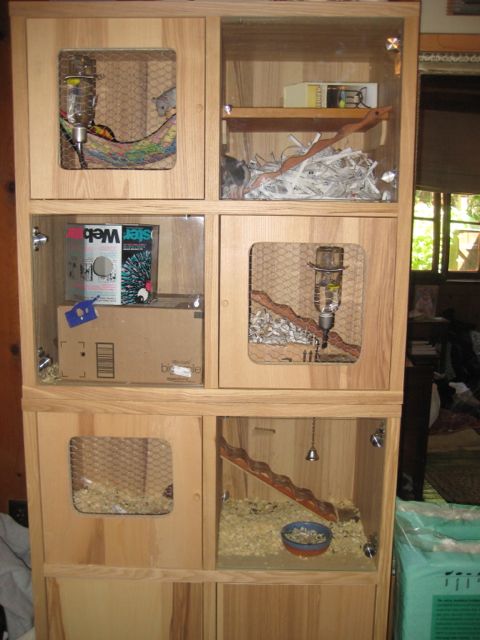 Description: We had four pet rats for a while, and they needed a comfortable, yet stimulating place to live, when they weren’t running loose (under close supervision.) We decided to do an IKEA Hack, before we knew there was such a thing. The exact item we used (TRABY) has been discontinued, but there is a very similar one in EXPEDIT, sort of a modular, four-cubbyhole storage unit. The older unit came with pressboard/veneer doors, or glass doors were an optional extra. We got two of the units, and three of the glass doors.

The units came with legs…we discarded one set, and clamped the two units one atop the other, and installed one set of legs. This gave us about a 6 foot tall unit, with 8 cubbyholes. We used to bottom two for storage of food and bedding material, and installed the solid doors. The three glass doors were installed in an alternating pattern. We cut large, rounded holes in the three remaining solid doors, and covered them with chicken wire. We trimmed the inside of the doors with strip wood to cover the edges of the wire. 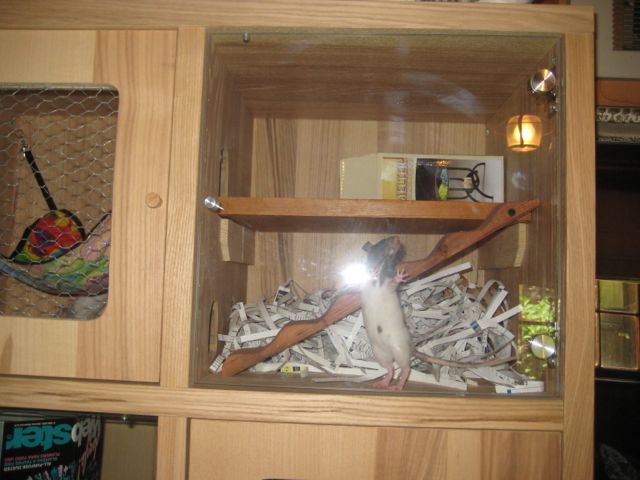 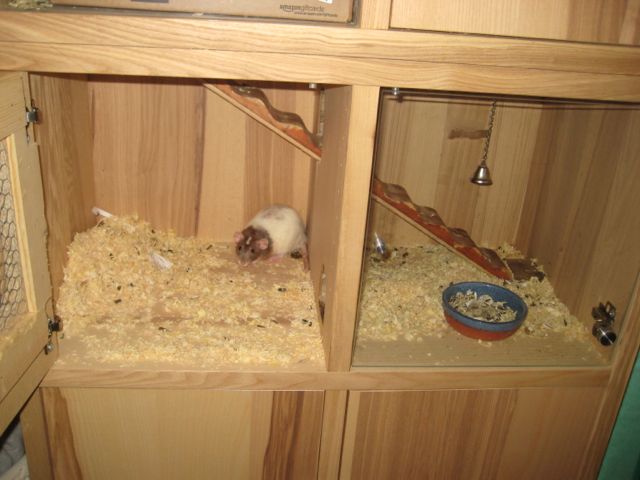 Then, we cut holes for passageways between the cubbies. Vertical holes got stairways, made out of wavy trim boards designed to support corrugated roofing material. Horizontal holes got little doors, so that we could isolate pairs of rats for a while. We installed some internal shelves, and one of them got an extension that went through a horizontal hole, making a “diving board” that led into a hammock.

The ratty girls absolutely loved it. We could reconfigure stairs and shelves, to give them new ways to explore, and often made new “rooms” by putting a small cardboard box inside a cubby or two. It was fairly easy to clean, after we tung-oiled the wooden veneer surface (the newer EXPEDIT has a melamine type veneer…might not be safe for chewing pets 🙁 But, this ought to give you some ideas: