What? No Printer Station Furniture? 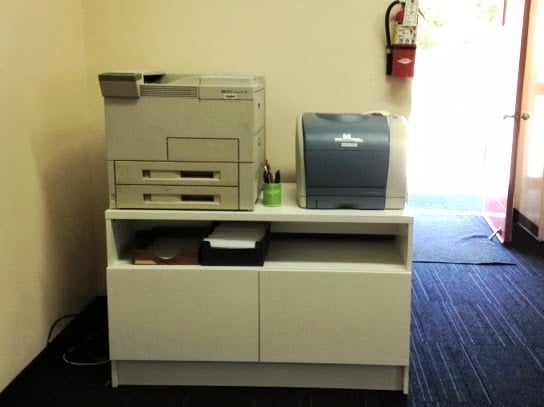 Description: My son’s school was in serious need of a consolidated printer area. We searched for a parent who could possibly carpenter a customize a printer station for us, but no one stepped up. So, we hacked.

We basically took a Besta desk (which was just deep enough to hold our 20″ square giant of a printer ) and merged it with a Besta cabinet.

We first built the desk.
Next step was to cut down the top and bottom of the Besta cabinet to fit inside the desk.
We added additional holes in order to bring the cabinet up to the height we wanted.
We added aluminum angles underneath the bottom piece of the cabinet so the weight would be supported.
Lastly, we added a toe kick with a piece of white laminated board we purchased at the lumber store.