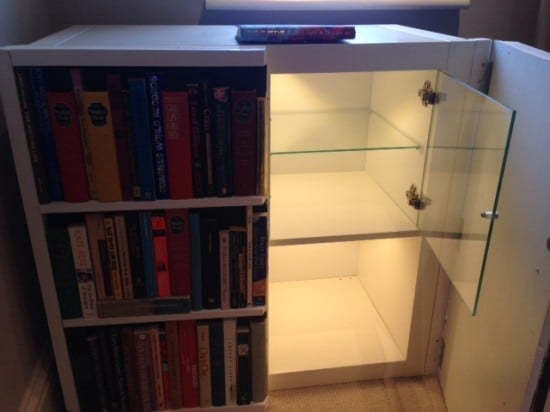 My 7 year old son has this random collection of stuff he calls his ‘mini museum’ – rocks, fossils, marbles, old film canisters – in other words, he’s a hoarder! Anyway, he asked if I could make a display cabinet for it all but added that he wanted the cabinet to be disguised so that it wasn’t obvious to people that it would have a treasure trove of stuff inside. 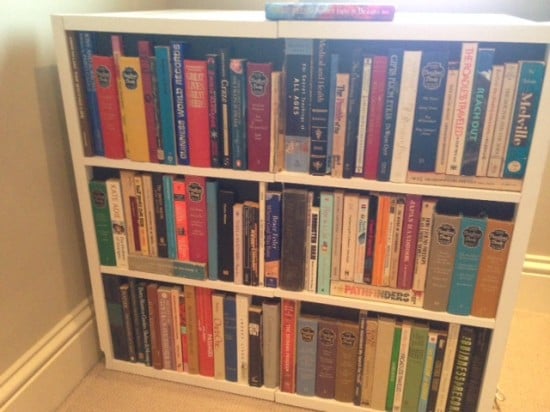 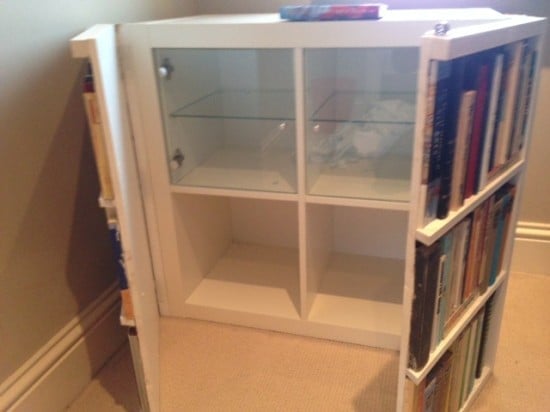 So I came up with this fake book-case cabinet. If you can get hold of enough books, it’s pretty straightforward. It’s going to be a Christmas present for him which explains why at the moment, the display cabinet is empty. I’ll try to upload another picture when it’s in his room and in use. Here’s how I did it:

* On the sides at the front, attach two pieces of planed timber. You’ll be hinging the ‘bookcase’ doors onto this timber because the Expedit doesn’t have the structural integrity to hold the hinges (at least I assumed it didn’t). The timber I used was 34mmx34mm. I used that size only because the hardware store I went to had a bolt-screw that was exactly 34mm longer than the screw that comes with the Expedit unit. This meant I could screw through the timber into the Expedit and hold it together exactly as securely as normal. I then painted the timber white.

* The book case doors are 12mm MDF painted white (although timber would be better and a bit thinner better again). The ‘bookcase edges’ are planed timber 25mm x 25mm and then shelves are 25mm x 15mm. I cut all the pieces to size first – the doors, then the bookcase parts and then the books. I nailed the bookcase into place from the book and as for the books, I just cut them on a bandsaw and then glued them into place.

* I used 3 hinges per side to hang the doors but that was overkill – 2 would have been fine.

Note that the doors are quite heavy to do tend to want to swing open. For this reason I cut the doors at an angle (where they meet in the middle) so that one holds the other shut. However, I needed to put a bolt on the top to hold the first door in place. I neatened up the look of that by cutting a hole in a final book to hide the bold. When the doors are open they do cause the whole Expedit to lean forward a fraction which means closing them is hard. I put two drinks coasters under the front of the Expedit which raises it up enough to stop that happening. 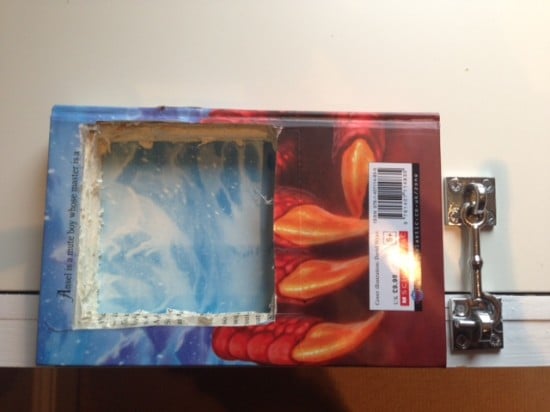 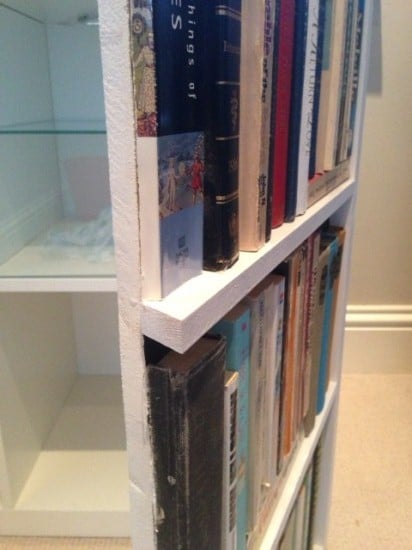 * To finish it off, I got a 4 strip Dioder white light and secured one in each of the Expedit boxes. I also got two glass inserts for the top two boxes. Lastly, I got a bit of white hardboard and secured it on the back so that you couldn’t see the skirting board and wires behind the bottom two units.

* Overall, it took about 14 hours split over a couple of weekends (it was waiting for paint to dry that stopped this being a one weekend project). I did it with really basic tools (except for the bandsaw for the books) – but if you look closely it is a little rough around the edges! In addition to the cost of the Expedit, lighting and inserts, it cost me about 15 quid for the timber, hardboard, paint, and catch. I got the books for free.