Having just relocated from the UK to Singapore and purchased a new large screen TV I was looking for an economical TV bench to house all of my electronic equipment including a Blu-ray player, HTPC, PS3 and NAS whilst also providing good air circulation given the warm ambient temperatures in Singapore.

I liked the design of the IKEA LACK TV Bench but the space was too narrow to house the larger pieces of my equipment. However, as I toured the IKEA store I noticed the LACK side table was the same depth but also just over twice the height. From here a plan formed to join two TV benches together and to use the side table to create a two tier TV bench with a more spacious lower section.

1) Build the first TV bench top using the original short sides as per instructions. Once assembled this should give you a U shaped piece

5) Position the base on top of the higher sides and use a fine drill to mark the taller sides where the four large counter sunk bolt holes are in the base
a. Remove the base and drill the four holes vertically down into the sides with a 5mm drill. Keep drilling until the drill breaks through into the cavity in the side panel
b. Position the base back in place and attach with four of the long hex head bolts (104323) from the TV cabinet

6) Put felt pads on the bottom and flip over and position the two tier TV bench in your living room. 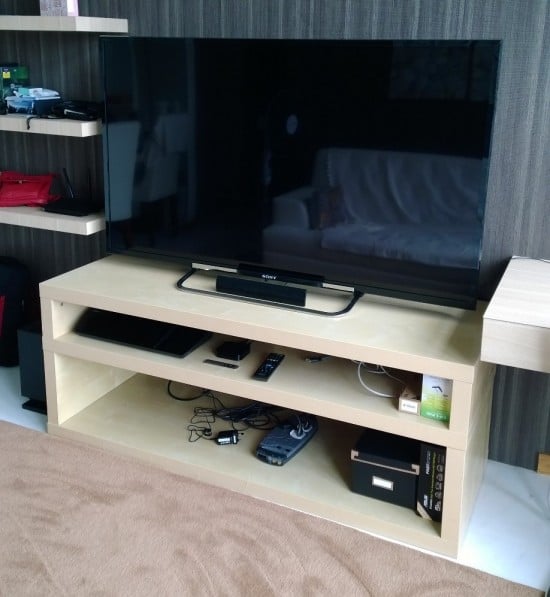