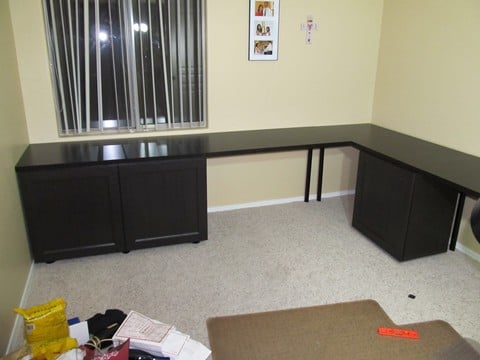 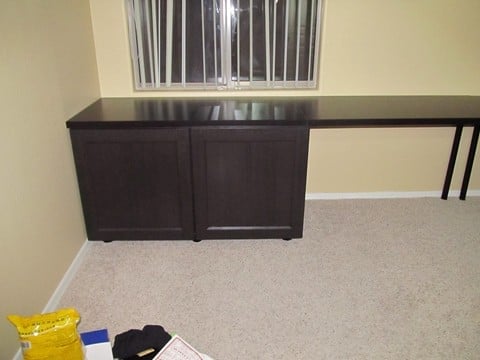 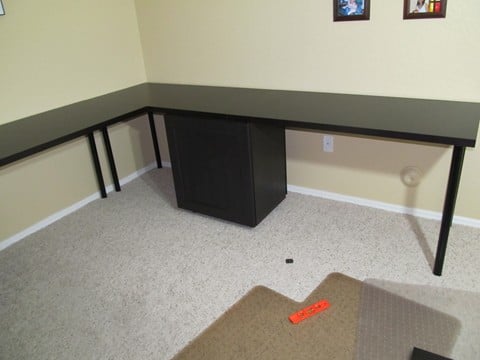 My wife wanted a large desk for our office. After finding this site and others I decided to see what I could do with Ikea products. I used the 47″ Besta Frame and 25″ Besta Frame in black brown. Covered them with the Vassbo doors. Used four Linnmon 47″ table tops with legs.

I then used small metal strips to attach each table top to the adjoining one, and metal brackets to attach the table tops to the storage units for overall stability. I may anchor it to the wall, but I don’t think it’s necessary. The one issue I ran into is the height of the Besta units compared to the table tops and legs. There is a 2.25″ difference. So I made my own feet for the units. I went to my local home store and bought 1.75″ furniture feet (called bun feet). They have a screw already in them but I removed that. Then I bought some small half inch thick 4″ wide boards and cut them into small squares. Glued the squares to the feet; spray painted them black and nailed the square to the bottom of the Besta frame and with some margin for error in my carpeted room, it came out great. I was going to use the Linnmon corner table but it would not fit with my design, so I just went with the normal table tops.