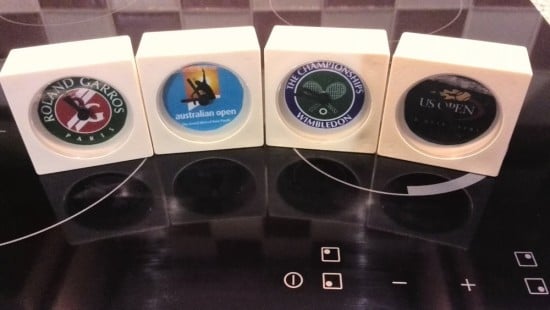 Three times a year I am frustrated at not knowing what time tennis matches are played in the grand slams overseas. I have considered setting a clock to a different time for the two weeks each time but it’s not ideal. Then I thought it’d be cool to have four separate, dedicated clocks: one for each of the grand slams!

It’s pretty simple to do but here’s what I did:

I purchased four Vackis alarm clocks at just £1 each.
Used Photoshop to create circular logos for each event (the US Open and Australian Open aren’t circular) and scaled them correctly.
Printed the logos. I did this by having them printed professionally in a lab. The prints won’t fade this way.
Prise the perspex fronts off the face of each clock with a small screwdriver.
Pull the hands off gently. I discarded the alarm hand as it isn’t necessary and messes the aesthetics up.
Cut out and glue the logos to the paper face.
Replace the hands and perspex, set the time, et voila!
Total cost £4.39!