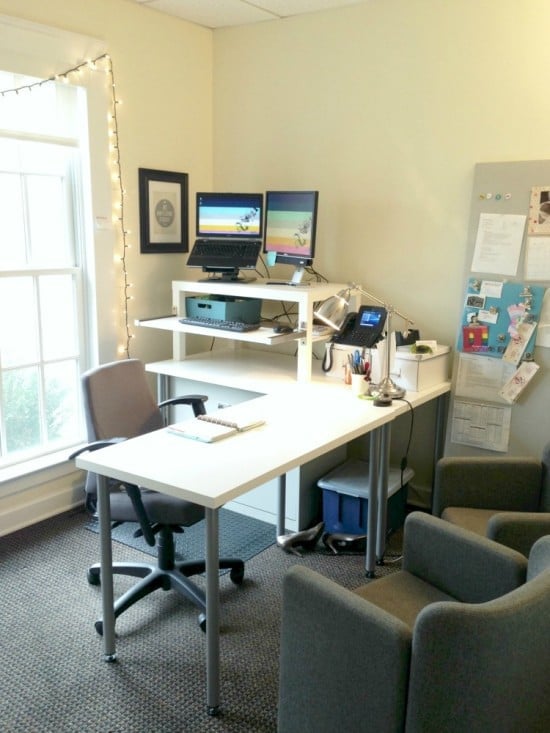 I had been using a makeshift standing desk for a couple of months, but since I haven’t missed sitting, I decided to look for a permanent solution. The IKEA LACK Coffee Table desk is perfect – it fits dual monitors, it has a bonus interior shelf, and it looks great! 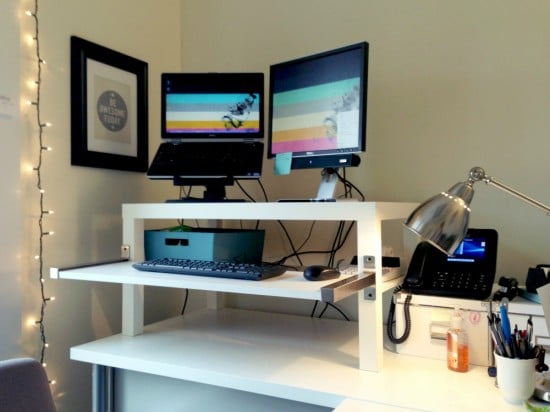 Step 2: Saw EKBY JARPEN down to 35″ (so that it’s roughly the same length as the coffee table)

Step 3: Measure the height at which to apply the shelf to the front of your coffee table. Ergonomically speaking, you’ll want it at about the same height as your hips. For me, that was ten inches from the bottom of the lack to the top plane of the shelf.

Step 4: Attach EKBY BJARNUM brackets and EKBY JARPEN shelf to the coffee table according to the specifications in the EKBY BJARNUM package. This is where you’ll need four screws (they don’t come with the brackets). I was nervous that the hollow legs of the LACK would cause the brackets to be unstable, but they’re not. You don’t need any special wall-mounting screw stuff if you don’t have it…just a screw and a screwdriver – it’ll be golden, seriously – it’s the sturdiest thing I’ve ever built. If you’re still nervous, get a wall mounting screw and use those instead.

Step 5: Once the brackets and shelf are in place, screw the four tiny screws that come with the EKBY BJARNUM into the bottom of your self for stabilization (per the directions).

Step 6: Place your monitor(s) on the top shelf, your keyboard and mouse on the front shelf, and anything you want on the interior shelf.