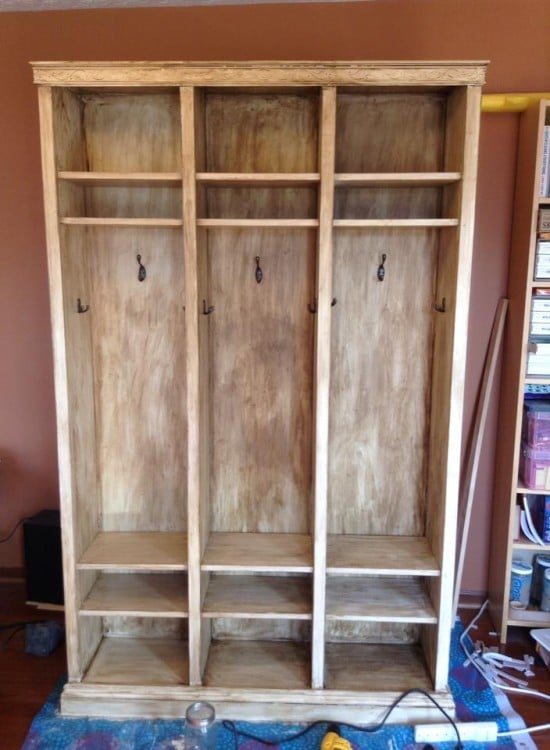 This is my free-standing Billy bookcase-into-lockers hack. (My first!)

We started with our lovely Billy bookcases in Birch: 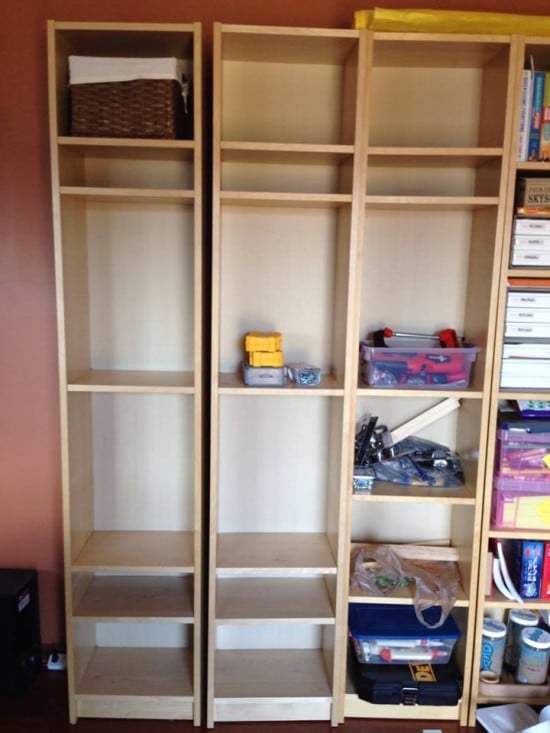 Next, we screwed the bookshelves together through the pin holes and removed the center support shelf. This involved a little disassembly, but nothing too difficult. 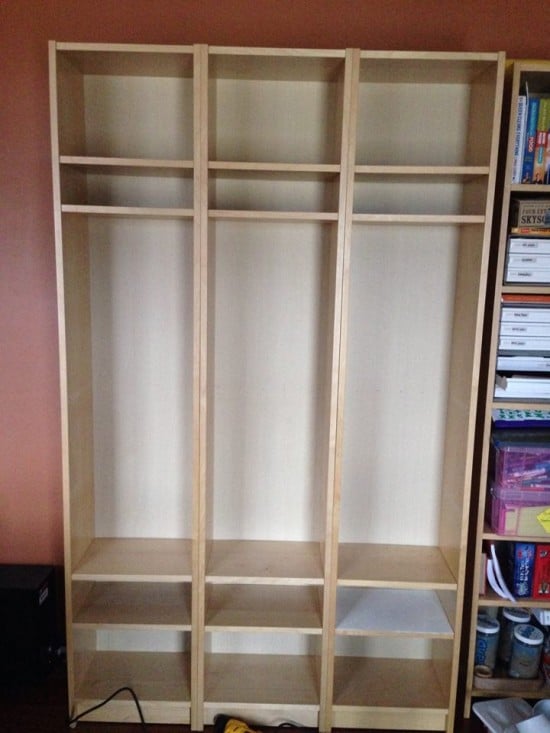 We built a face frame out of 1×3 pine, which we learned is very soft! The Kreg jig instructions said to use course screws for pine, but this caused the wood to split. The fine Kreg screws worked wonderfully. 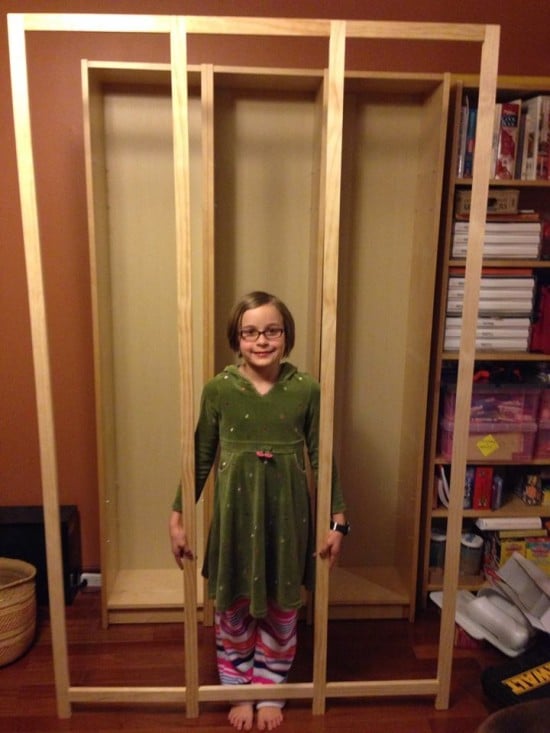 My lovely daughter holds the face frame before it’s nailed and glued into place. She also helped with the nails.

I fretted a little about the face frame, to be honest. I was so happy to discover that 2 Billy bookcases, together, just required a 1×2 to cover it. But what do you do with the edges? I didn’t want to rip a 1×3 in half lengthwise. Then I realized that trim on the side would even it up! I also realized that adding trim on the sides would help to stabilize it, give our hooks something to dig into, and add a nice decorative touch. 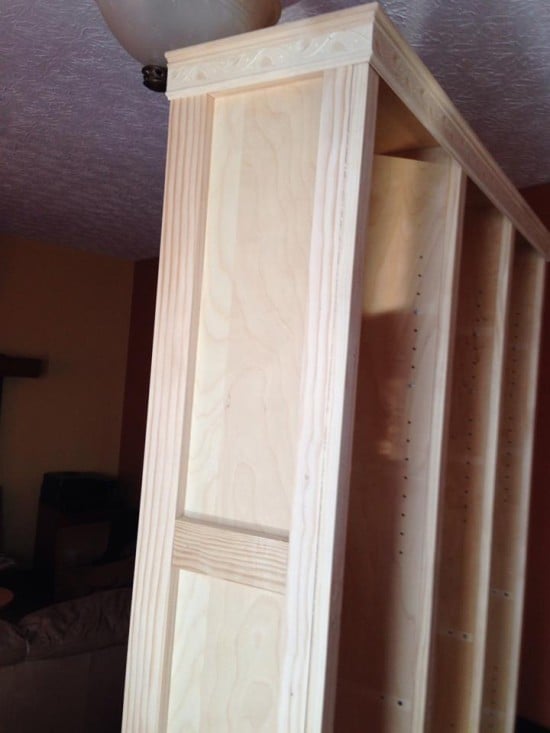 I love the way it looks! I should also mention at this time that unfinished pine matches the birch finish beautifully- I almost didn’t want to paint this project because it looked so nice!

I really wanted to add beadboard across the back when we started this project, but could not find it in the same thickness as the fiberboard backing (1/8″). I worried that trying to add 1 big piece of fiberboard would result in too many gaps and didn’t want to deal with that. My husband suggested cutting individual pieces of beadboard and putting them in each cubby, but after a while I decided that a beadboard backing wasn’t worth all the time I was devoting to trying to figure it out. Also- unlike the wider Billy bookcase, the narrow Billy has fiberboard, not cardboard, for its backing, so we stuck with what we had.

I had used Kilz primer and glossy enamel when I painted my son’s Expedit to look like a TARDIS (more on that later) but I didn’t want that look. I liked the look of Annie Sloan‘s chalk paint, and knew I wanted that kind of look for this project. Plus: no priming!! So off to our local Annie Sloan stockist. Luckily 1 quart covered the entire project, because that stuff is expensive!! 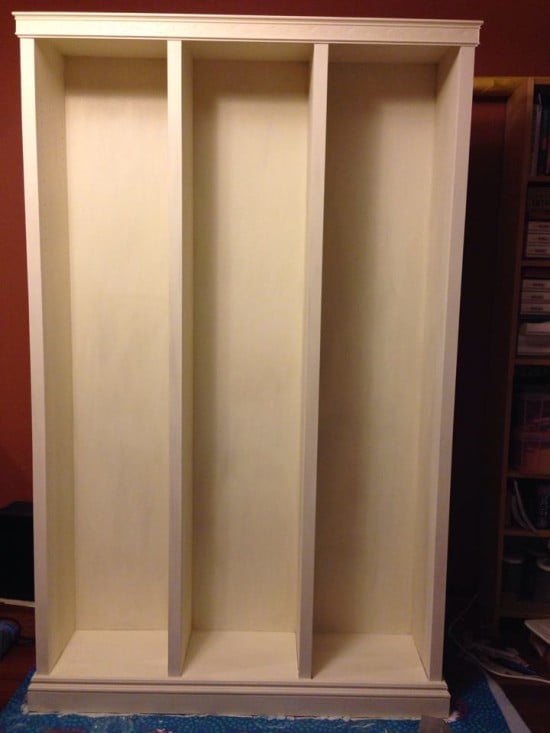 Really starting to come together! It’s hard to tell with this lighting but this is Annie Sloan’s Old White with clear wax.

We added some dark wax. 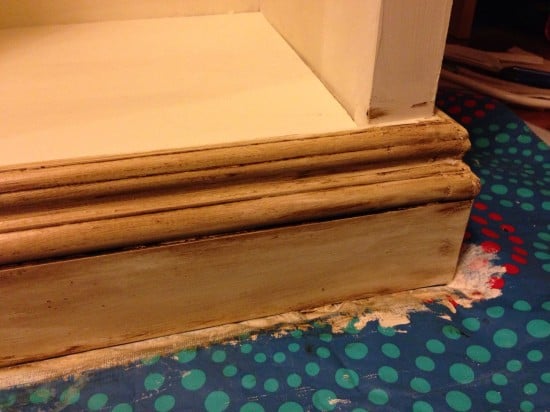 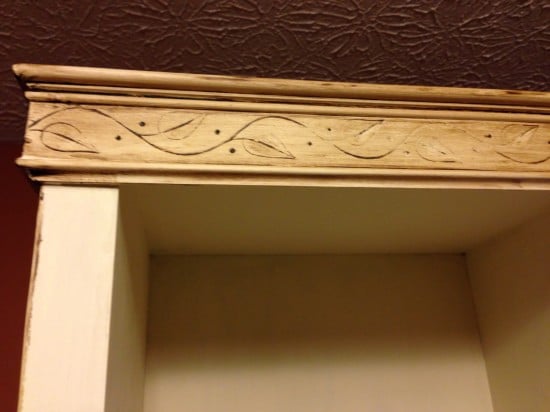 I tried to find the dark bronze hooks at Home Depot and Lowe’s but they didn’t have much in stock. I was surprised to stumble upon them at Target!  My husband installed them for me, as well as attaching some MDF and spare wood across the back so those hooks would be nice and strong.

And that’s it! Just waiting for backpacks, boots, baskets and bins!