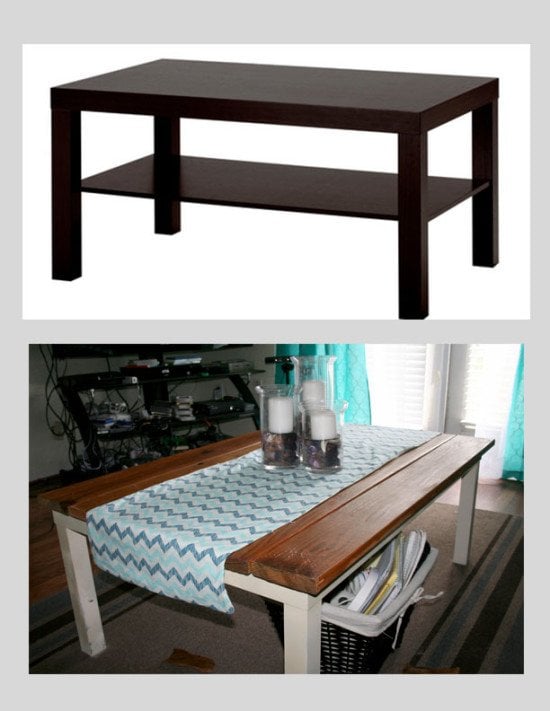 I bought the LACK coffee table in black brown because it was cheap, let’s face it. A year after I purchased it, I was sick of it. But, it is a large and functional table, so I wanted to continue to use it. We moved into a small house near the beach that has a cottage kind of feel, so I wanted to make the LACK table into something rustic looking that would fit into our beach cottage. What I did:

1) I removed the bottom board from the table. Now, it has a much more open feel and is way less bulky.

2) I painted the formerly black-brown table a refreshing, off-white color. I just used spray paint. Yeah, you’re probably not supposed to, but it was cheap, it gave me even coverage, and I made sure to get the all-weather variety.

3) I bought three 8′ long decking boards from Lowe’s and got them cut in half. I stained the boards with a transparent stain so that I could still see the texture of them (creates that rustic, aged feel). After the boards dried, I sealed them with a clear coat. Next, I nailed them to the top of the LACK table.

4) I decorated the table with some candles and my own homemade table runner and I stood back and admired my brand new, old LACK Ikea table. I think I spent about $8 on the entire project (minus the original cost of the table)!