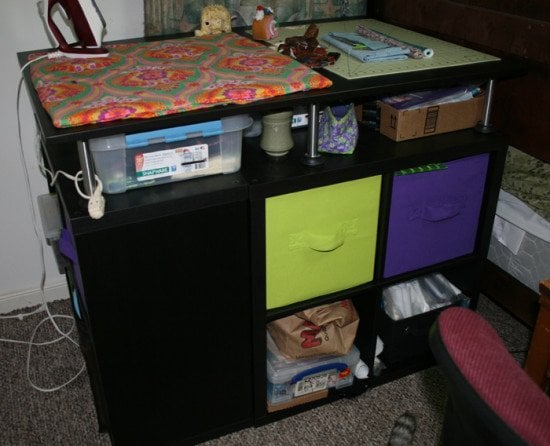 A new spin on an old hack. I’ve seen Expedit shelves used to make counter height fabric cutting tables before, but I wanted to tailor one to my own tastes. Since Kallax shelves are 30″ high, you need 6″ legs to bring the top to 36″ high (which is perfect for 5’5″ me). I felt that those 6 inches under the shelves was wasted, but who said you HAD to put the legs on the bottom?

We drove the 1.5 hours to the nearest Ikea and purchased 3 black-brown Kallax 2×2 shelves, 1 black-brown Galant tabletop (47.375″ x 31.375″), and two packages of four 6″ Capita legs. Then it was a trip to Lowes to purchase 4 L brackets, 4 straight brackets, and 4 bags of wooden closet hardware (the pieces you screw into the wall to hold the bar up). I really wish I took step by step photos but I was too excited during the whole thing to remember. 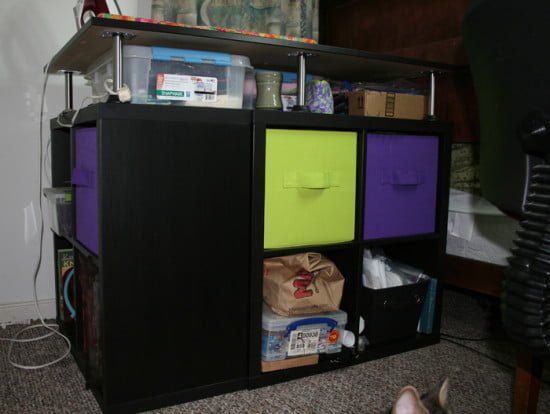 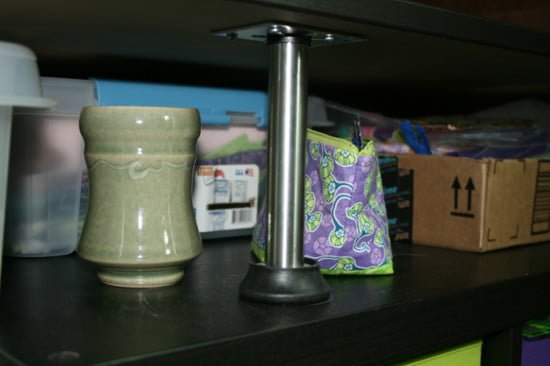 – First we put the three shelving units together, which was pretty easy.

– Then we put two shelves back to back to create a 30″ wide by 30″ deep cube and stabilized them with the straight brackets, two on each side. We screwed them together on the inside to hide the hardware.

– For the third shelf, we rotated it so its back was against the side of the other two and stabilized it with the L brackets. Again, screwing them together on the inside of the cubes to hide the hardware.

– Next we had to take our Dremel tool and sand down the inside of the closet hardware as they weren’t quite wide enough (the base of the Capita legs are about 1.625″ in diameter). Once that was done, I dusted them off and painted on two coats of black acrylic latex enamel paint.

– While those were drying, we laid the tabletop on the shelves to check where we should screw in the Capita legs as the top is just a little larger than the shelves/base. We then flipped the tabletop over, measured and marked the center, then used that as a reference to screw on the Capita legs where we needed them: one on each corner and one in the center front and back for a total of 6 legs (you’ll have two left over, just store them away if you need them later).

– We set the tabletop with its new legs onto the shelves/base and gently popped on the closet hardware. After shifting the everything around until we had it just right, we used a white chalk pencil to mark where the hardware was sitting. The tabletop was removed and set aside, and we used those marks as a reference to drill the closet hardware into place on the shelves/base.

– Take the tabletop and set it in place; the Capita legs nestling into their new closet hardware homes.

Now we have a nice counter height cutting table with a little mini 6″ area under the top to hide projects and other items I use on a daily basis. The four extra-long cubbies make a great place to store bolts of fabric and other long items. On the one end shelf I keep books, embroidery supplies, and other items I need to get to only once and a while. Since I wasn’t sure what I would need for storage I purchased fabric boxes from Wal-Mart as needed instead of getting the nice ones from Ikea.

1) The white Galant tabletop is $20 cheaper than the black-brown or birch. I would have gone with white, but they were all sold out.

2) A drill makes things a lot easier and quicker, especially if you have a small drill bit so you can get the hole started before trying to use the screws (unless you have self-starter screws).

3) Get someone to help you with the last part, as the tabletop isn’t too heavy but it is a bit awkward.