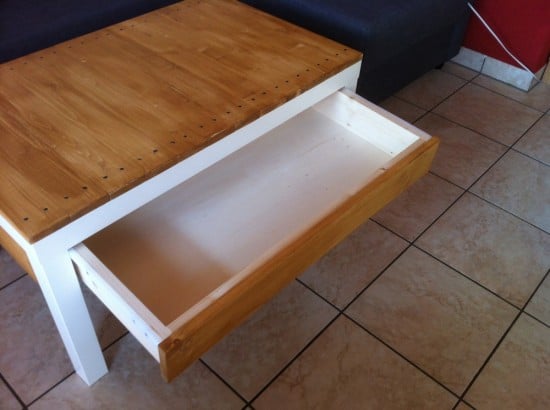 There are 2 individual steps for the LACK hack:

I bought 12 wooden boards in our hardware store, 55×7,5×1,8cm each. I planned to fix the boards to the LACK table with wood glue and so I first grind the top surface of the table. After that I fixed the boards (one by one) with the glue and screw clamps. When all the boards were fixed and the glue was cured I started to grind also the boards. I used sandpaper #60 and #180. After that I prepared the table for the painting with the light oak glaze. When the glaze had dried I sanded the board again with the #180 sandpaper. To give a antique touch I used some black nails (4 per board). 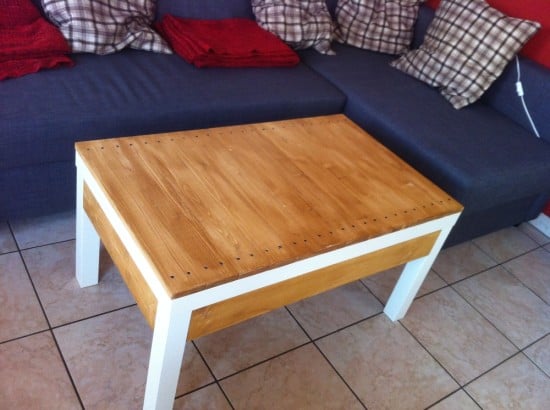 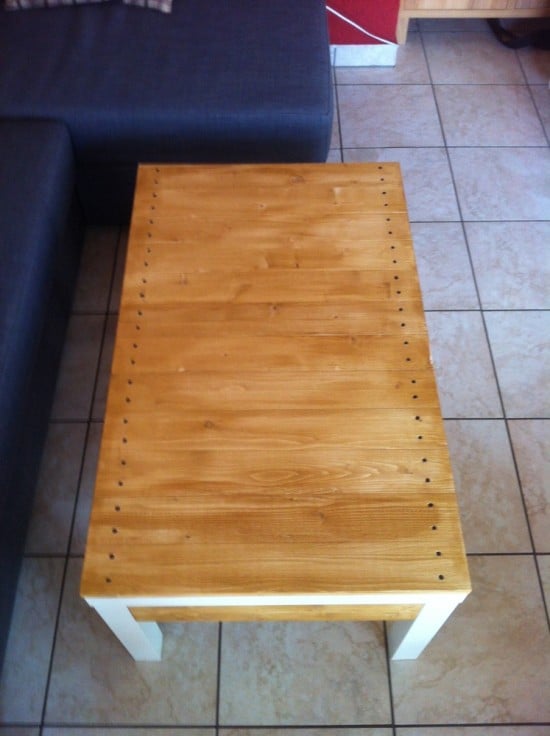 For the drawer hack you also need wood. I went to the hardware store and bought some different boards:

As well as a thin wooden plate 77,2x36x0,4cm as drawer base. Furthermore I bought some plastic glide rails and also 2 wooden strips of 1x3x60cm. To fix the boards I bought also metal angles 25x25mm.

First I sanded the boards one could see from outside (marked with *). I used the same sandpaper as in part one of the LACK hack. Then I mounted the metal angles on the two 44,5cm boards and on one of the 79,4mm boards. The second board I need for the front panel of the drawer. When the angels was fixed (I used screws, 3x12mm) I painted them with the same glaze I used for the top boards. While the glaze was drying I started with the construction of the drawer. I used the 77,2 and the 36cm boards, fixed them with screws (3,5x35mm) and wood glue. After that I fixed the bottom plate with glue and screws (3x12mm). I also mounted the glide rails on the short side of the box. When the glaze was dried I fixed the cover boards with the metal angels to the table bases. The fourth board I used as cover board for the box I prepared for the drawer. As last step I fixed the two wooden strips at the table bases so that the drawer can glide on them.