What else can I do with that old CD shelf? Horizontal Benno 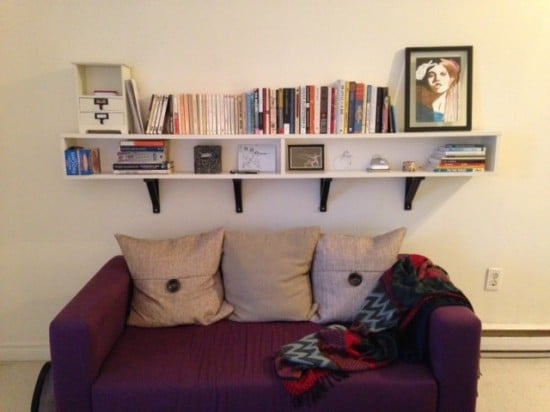 In the 2000s, having a large CD collection was all the rage and many of us purchased the BENNO to store CDs vertically. However, now that albums are more often purchased online and CDs are being sold or given away to avoid clutter, what will happen to that old BENNO shelf?

I recently moved out and wanted to re-purpose the BENNO as a horizontal shelf/mantle behind a loveseat in my living room. This way, I could display my collection of books, which will hopefully never become outdated. It was fairly easy and I think the end result is a lot more practical than the vertical BENNO (one can still store CDs in this, if they really wanted to).

For this hack, you will need:

1. Preparing BENNO
I removed all of the shelves, keeping only the skeleton of the BENNO, which has a neat middle separation. I also wanted the shelf to be somewhat symmetrical, so I removed the parts of the BENNO that served as legs. I used a manual saw, but if you have access to an electric one, it would go a lot quicker! You could also paint over the part you just sawed off.

Many other modifications can also be done (although I didn’t bother doing them) and I suggest doing them before you hook the shelf up on the wall, because you will have to take it apart otherwise:
– Removing the masonite back cover (if you have a nice painted wall) or painting the back another colour if yours isn’t white.
– Filling up the holes for shelf placement in the BENNO and painting over them.

2. Placing brackets on the wall
I found the studs and marked my wall in order to screw in the brackets at semi-equal distances (you can be as precise as you like!), making sure that the brackets are properly levelled.

3. Securing BENNO on brackets
Third, I placed the BENNO horizontally on top of the brackets and screwed the brackets into the BENNO. Make sure the screws are not too short, because the brackets are thick and not too long so they don’t poke out from the wood.

4. Decorating and using it as you please! 🙂

Hope this was useful. I had a lot of fun doing this hack and I am glad to share it with you! 🙂