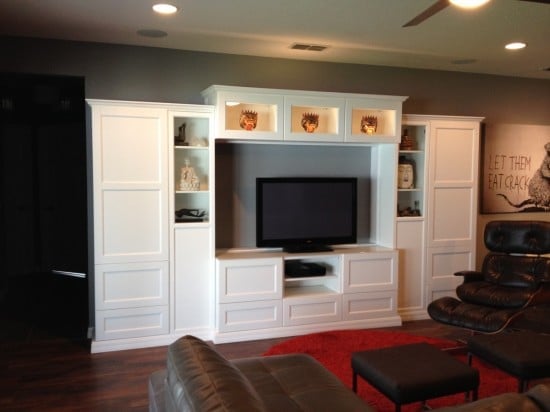 This hack is a new twist on the many wonderful Billy and Besta built in projects already on IKEA Hackers. This project is unique because it combines Besta frames with Billy frames – which aren’t meant to attach to each other – in the same project. This is a unique challenge because the heights and depths of both collections are different. Matching them up requires a bit of cutting the Billy’s foot to the right height – and then boosting the height of the Bestas to match. No worries though! This project can be completed by anyone with a sense of adventure and a little know how around a few power tools… oh and time… oh and patience. 😉

It all began when our happy family recently bought a new house with a large spacious floor plan. The living room specifically had a huge wall we wanted to convert into an entertainment center. It was at least 12 and a half feet wide. When we went to look for existing entertainment furniture, they were all too small and looked dwarfed by the space.

Meanwhile custom built ins for the same space were often estimated to be more than $6,000! We knew there had to be a neat way to have a custom built unit that fit the scale of the space for a good price. Luckily, my husband and I are both quite adventurous and willing to learn handy skills around the house. That was the genius behind the offerings at our local IKEA. The frames of the Besta seemed to offer plenty of options.

Our first challenge arose when we realized that the Besta single units had a width of 23 5/8 inches. That meant it wasn’t possible to have an arrangement of Bestas that would cover the whole wall without jutting into the dining room. Anything less would be asymmetrical – with the TV off center. The maximum we could get into the space while keeping a symmetrical presentation would be 6 Besta’s wide – with too much room on either side.

That’s when we got to thinking, “what if we integrate other thinner IKEA cabinets into the design?” We looked at the other options and realized that adding two Billy bookcases would fill out the space perfectly! We added them to the shopping list.

Then we realized the Billy’s were too tall and much less deep than the Bestas that would be next to them in the design. We quickly got to measuring and tinkering with the plan to see how we’d make it work so that the cabinets all had the same height and had faces and doors flush to each other…

Before we get into that, you’ll notice in the first picture of the finished project, that we wanted a central pedestal to support the television and house the components. This would then be flanked by the mirroring Billy and Besta towers on either side. The central pedestal would stick out approximately 5 inches for interest from the side towers. Also above the TV, the design called for a “floating” bridge made from three Besta cabinets suspended between the towers. The bridge would also stick out from the wall about 5 inches to match the pedestal below. That design dictated the next steps.

1) First we built all of the cabinet frames according to the instructions.

2) Second, we built the two towers of our design. We did this by first making the Besta’s taller. (We used the extra tall 75 5/8” Besta units for this.) Look at the picture below. You’ll see this was accomplished by making a rectangle base out of 2×4 lumber (peaking through by the baseboards of the wall in the picture) and attaching them to the bottom of the Besta with glue. The dimensions of the rectangle base matched the dimensions of the base of the Besta exactly. Sizing this is easy. Just measure the Besta, use the dimensions written on the package, or hold up a 2×4 to the base and mark the length with a pencil. Cut the wood to size and screw together into a rectangle base.

Next we adjusted the height of the Billy cabinet. In order to get the right measurement, we layed the Besta on its side and then lay the Billy on its side on top of the Besta. This allowed us to align the tops and faces of the cabinets to be flush. We wanted the faces flush so that all the doors created a flat presentation, and the tops flush to add molding later. You’ll notice at this stage the feet of the cabinets are nowhere close to being aligned. That’s okay. It’s important to align the tops and faces only at this stage.

We temporarily attached the cabinets, while still on their sides, together using the inter-cabinet connector screws included with the Besta. In a pinch one can use painters tape to temporarily hold them together while they’re on their side.

Once aligned and on their sides, Billy on top of the Besta, I marked where the bottom of the rectangular base was along the overhanging foot of the Billy. What you’ll notice is that the foot of the Billy is about 3/4 of an inch longer than the rectangular base that is attached to the adjoining Besta. Mark, and then safely cut the Billy frame to the marked length. Reassemble and attach the Billy and Besta together using glue and screws as needed. The bases of both pieces must be the same length so that the towers stand level when finally assembled.

Repeat for the second side tower, but make sure to flip the orientation for symmetrical towers. When complete glue the shelves together and allow them to dry.

3) The third step was to assemble the central pedestal of the design. We attached three single Besta cabinets together using the included screws. We added builders caulk between the cabinets for added strength.

DO NOT ATTACH the pedestal and towers together at this point. 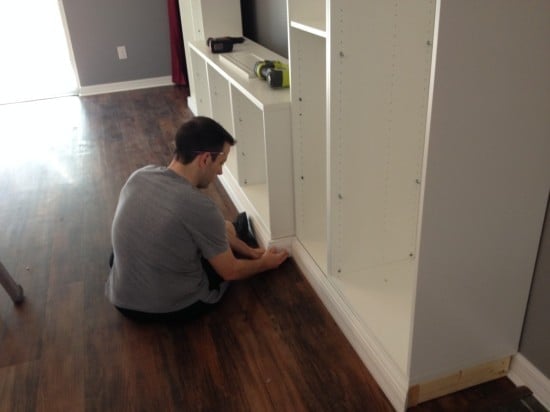 4) The fourth step is to create the suspended bridge portion of the design. This is optional and can be perilous because it essentially consists of hoisting and attaching heavy cabinets away from the wall. It can be done with care. You’ll notice we did not use the Besta rails for this application because we were not attaching them to the wall – and instead used a homemade cleat as our solution to suspend the bridge 5 inches from the wall. 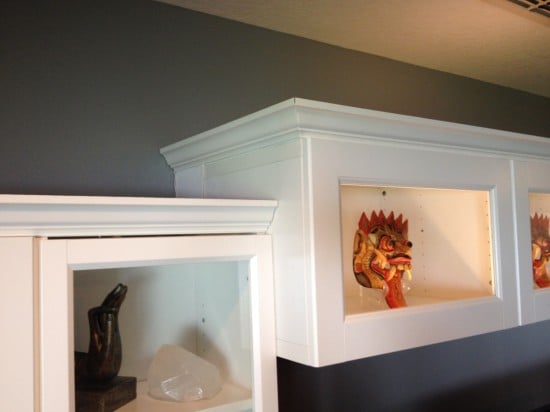 In order to suspend the Besta bridge sturdily 5 inches from the wall, it was required that we built a series of supports along the back of the cabinet. These supports were a series of legs that allowed the Besta to be supported away from the wall – and yet not allow the cabinets to collapse towards the wall because of gravity. They were essentially legs consisting of three 2x4s stacked to each other at each of the bottom corners of the units. The top cleat consisted of a single length of 2×2 along the top of the besta units comprising the bridge. This top cleat engaged into two 2x4s and one 2×2 that were screwed firmly into the studs of the wall at the desired height and in the center of the installation wall.

See the cleat diagram below for an idea of how we did it. Do this only if you’re comfortable with the idea of a French cleat. YouTube it… and then proceed at your own risk. I had to say that. 😉 If you don’t feel comfortable with that type of construction, just leave the bridge out, or attach it to the wall using the IKEA Besta rails according to their instructions. We’re happy with what we did. It’s sturdy, hidden and did the job. 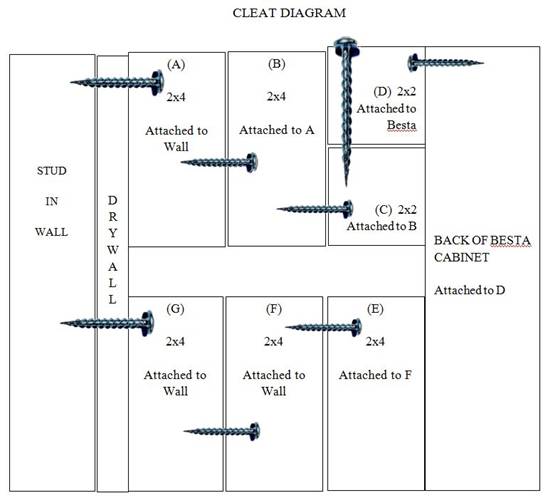 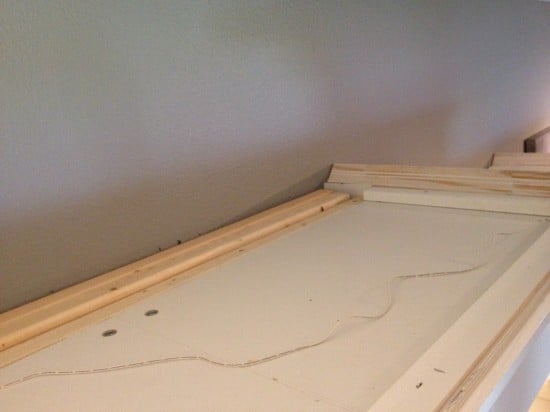 Once installed, we attached all the components together. Each was screwed and glued to the next. This made for a strong built in.

5) Once dry, we added base board trim and crown molding that matched the rest of the house to the unit. The base board and molding corners were mitered using a circular saw. The base board trim was attached using a nail gun to the 2×4 rectangular bases and along the front of the bottoms of the Billy cabinets. The crown molding was attached to 1 inch furring strips that I added to the tops of the units. See the white furring strips in the photo above. 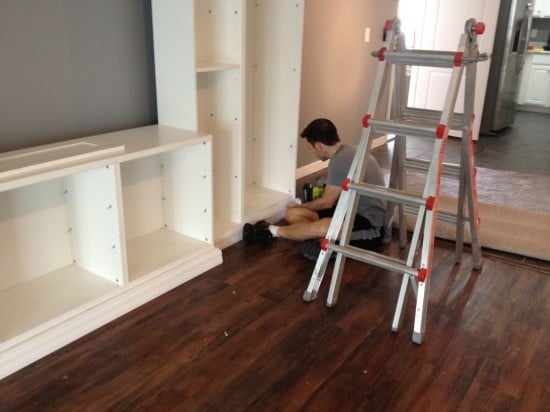 We simply fixed that by creating frame that matched the dimensions of the gap and inserting it along the interior of the TV opening. We used white 1×6 PVC boards. They matched perfectly. Similar melamine board was used to cover any visible gaps between the bridge and the wall on the outside of the Besta cabinets of the bridge. You can see the melamine board in the bridge photos above. 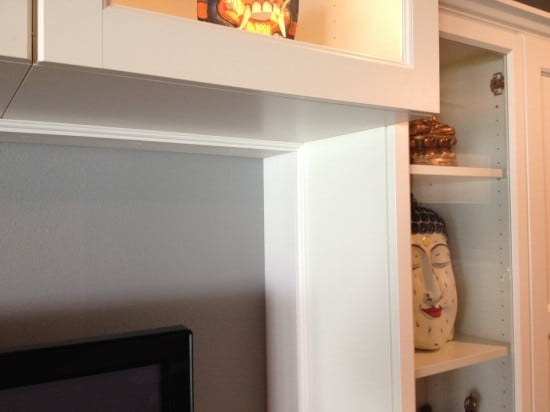 We left the bottom PVC board to slide freely to access cables, as well as a cable grommet to pass cables through. This was cut using a 2 inch rotary bit. 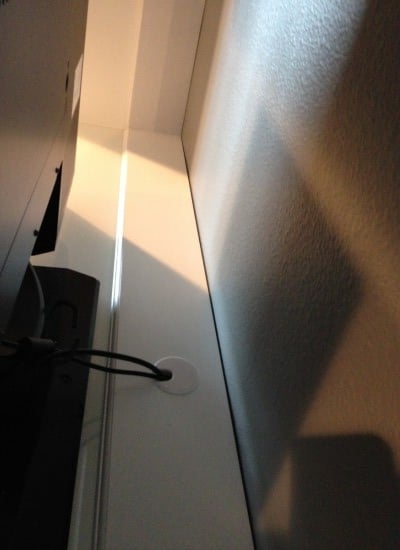 7) Finally, we attached the doors we wanted. You can pick any combination. We went for the solid wood look doors which were more traditional, matched the kitchen, and were higher end looking. We opted not to add handles once complete. 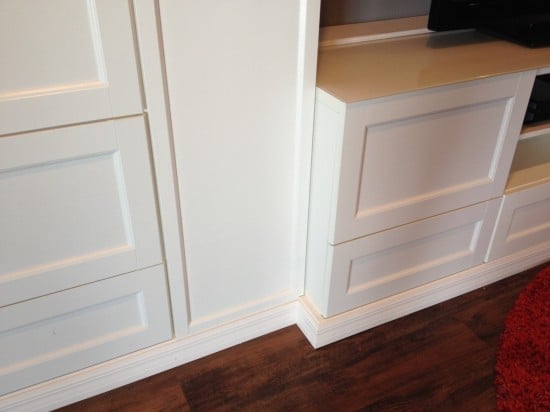 We chose the Billy doors with glass. They had to be cut about 3/4 inch at the bottom to fit. This can be done cleanly with a rotary saw. Use painters tape over the cut line prior to using the circular saw to avoid chipping the melamine coating on the doors. 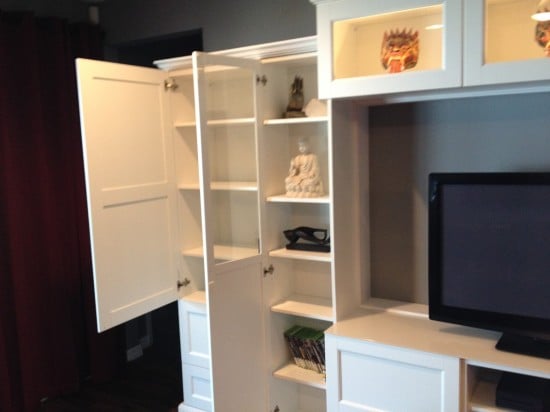 As you can see, the doors open and articulate beautifully!

8) We optionally put in DIODER light strips in each of the glass compartments. They are hidden behind the doors, out of sight. The cables are run behind the hinges and through a simple drilled hole in the top. The cables and switches hide behind the cabinet and the switches were installed inside the cabinet using the 2 inch circular drill bit as previous. 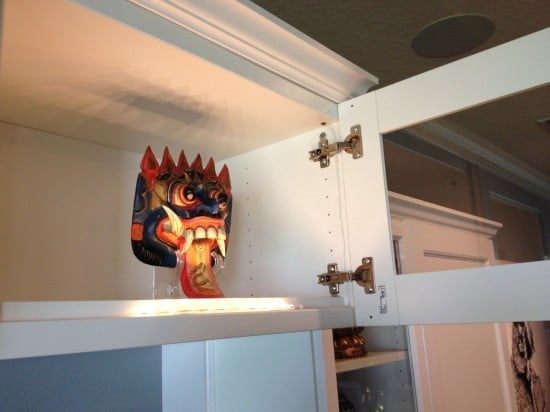 It was a huge project. It took time (about two weeks), research and know-how but was worth it. All in all we have a custom piece that looks professionally built in for less than $1,400. We’re very pleased with our new Billy Besta Bohemoth!

Good luck with your hacking adventures! I hope this post inspires others as much as others have inspired me!