I wanted to use a rolling LACK side table next to my bed for reading lamp, books, open storage, etc. but at 45cm it was really too low for my conventional American box spring and mattress which sit about 55cm high. In addition, I wanted more horizontal storage, I.e. another shelf inside.

So I decided to graft a cut-down LACK Side Table (“LST”) onto a LACK Side Table on Casters (“LSTC”), since they have similarly dimensioned elements. This seemed like a simple proposition, but I ran into some complications because of the unique structure of these pieces.

I started off by determining how tall I wanted the resulting stacked table, and so working backwards from there I cut down the legs of the LST to the proper length. This length depends on the final height you’d like to achieve, but I went for 15cm. So I took the four legs from the LST and first sawed off the bottom 1.5cm, which constitutes the foot or base of each leg. It’s important to preserve these bases since they will form the attachment on the LSTC. Then I sawed off the top 15cm of each leg, which preserved their attachment point to the LST top. The hollow center portions of the legs were discarded. 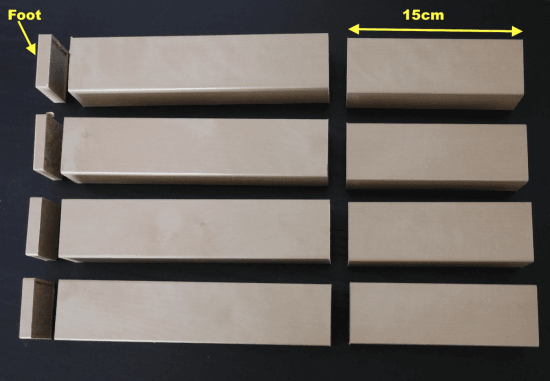 It was at the point of sawing open these legs that I realized that the LACK furniture is generally not made of wood, but a textured melamine veneer bonded to what is basically cardboard, and in the case of these legs reinforced with plugs of low-density fiberboard at the attachment points. This plastic skin means that LACK pieces are generally resistant to being refinished or painted unless you can find a finish that bonds reliably to plastic. It also means you need to be very careful and use a fine-toothed saw blade to prevent tearing this material (like I did, a little bit.)

Now I assembled the LSTC in the normal manner according to the IKEA instructions and got ready to bond the cut-off base plugs of the LST to its top corners. To prepare for bonding these plugs I masked the areas to be bonded and scratched and abraded them with a utility knife so they would have good attachment to the adhesive I planned to use: a white glue specially formulated to bond to melamine. You could substitute an epoxy or low-foaming polyurethane glue. 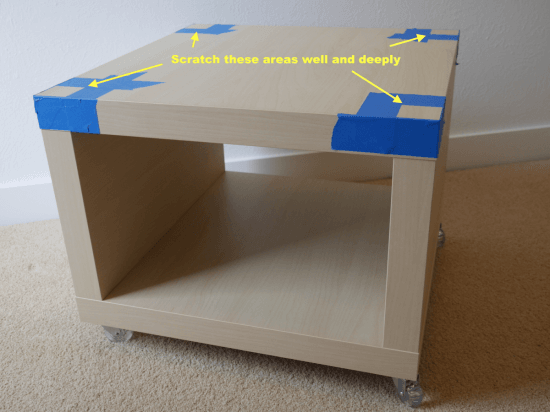 I then attached the base plugs from the cut-down LST legs onto each corner of the LSTC top with the adhesive and secured them each with a short wood screw in pre-drilled holes in the plug and LSTC top. If you don’t pre-drill the holes you are likely to shatter the thin plug when you screw through it. I was also VERY meticulous about locating these plugs on the top at the exact corners so they would mate with the cut-down LST legs. After the glue was dry I then peeled the remaining ring of melamine skin off the plugs so that the open-ended legs would slide over them. 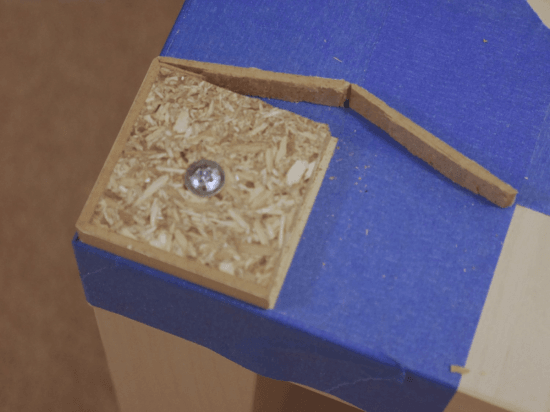 I had previously assembled the LST with the cut-down legs – using glue as I always do within the joints – but not screwed them in fully tight to the LST top. While the glue was still wet I left them perhaps 1/16 turn loose in case I needed to adult their angle slightly to align the open ends to the plugs, but in the end this wasn’t needed. I ran a bead of glue around each plug – this is where the masking tape was especially helpful to keep glue off the finished surface – and set the LST down onto the top of the LSTC. The plugs fit perfectly into the open ends of each leg, and I gave the glued joint added security with two tiny finish nails on the inside faces of each leg applied with a pneumatic air gun (you can probably skip this if you remember never to pick up the loaded table by its top!)

The finished assembly looked as if it had been designed that way by IKEA – with one exception: there are sometimes differences in the color of the faux “birch effect” finishes used by IKEA, even within a single line like LACK.

Thus the color of my LST top was slightly lighter than the warmer color of the LSTC bottom, a difference that is only perceptible in certain lighting conditions. Being a perfectionist, I attempted to apply a stain to the LST top that would match the bottom, but was never able to find a lacquer that would adhere reliably to the melamine, so I have resolved to live with this imperfection. I think you would not have a problem with color matching if using the black or white finishes. 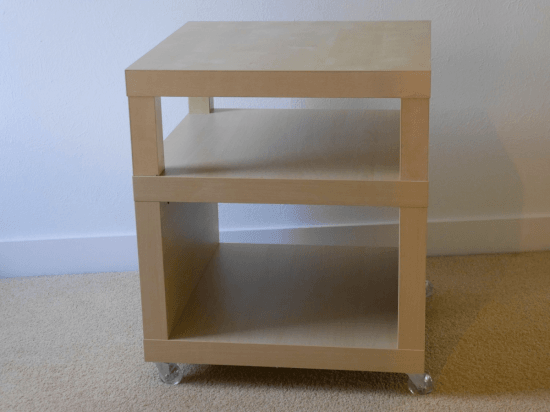 Now I have a great bedside table that has room on top for reading lamp, clock, glasses at night, storage for reading materials on the next level and extra blankets for chilly nights folded up on the bottom. And rolls away from the wall for easy cleaning! I am, however, careful not to pick it up by its top when it is loaded down with books and magazines so as not to stress the 4 points attaching the top to the base.