My wife makes things with leather, vinyl and fabric. She collects large quantities of these items, usually by the roll. Storage has always been an issue because the leather and vinyl need to lay flat rather than stand on end. We’ve tried a number of different types of shelving but nothing was ever long enough or adjustable enough to have the right configuration of shelves. While walking through IKEA one afternoon, we saw the FINNBY bookcase and noticed they were available in red. Since red is her favorite color, I decided this would be perfect for a hack!

The basic concept is to assemble all of the bookcases, without the backing, then place them in front of each other to make one very deep storage cabinet. Here’s the step by step:

Assemble 1 FINNBY bookcase. Do not add the backing.
Decide where you want your shelves and insert the pins for them now. 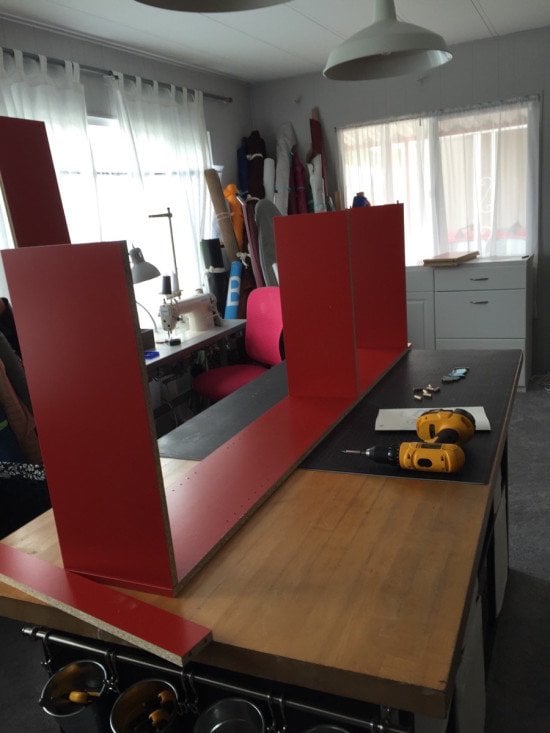 Assemble another FINNBY bookcase. Do not add the backing.
Insert pins for shelving so they match up with the first bookcase.
Stand this bookcase in front of the first one. 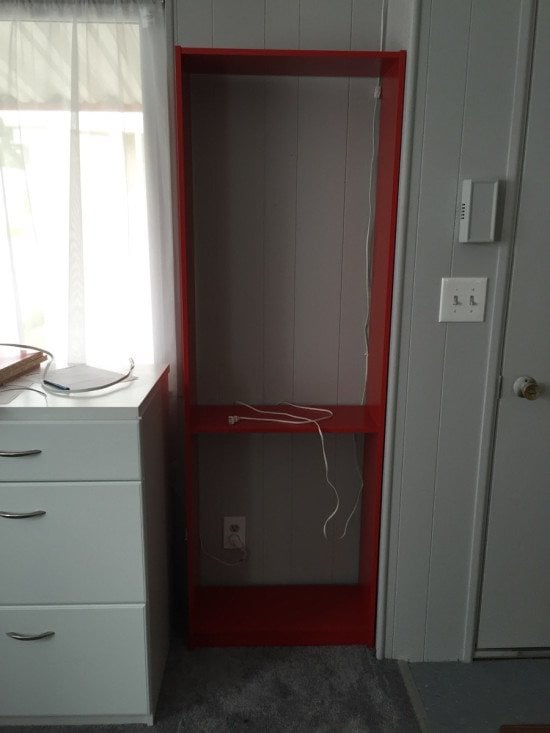 Attach the two bookcases to each other by screwing plate straps at the top, bottom and under the center shelf on the inside of both the right and left sides. On the inside of the bookcase, at the top, hold the strap so that the screw holes cover the front part of the back bookcase and the back part of the front bookcase. Screw the plate in place. Repeat the process under the center shelf and again just above the bottom shelf. It’s helpful if you have someone else hold the bookcases in place to make sure the sides match up. ( I don’t have a photo of this from this project, see note below as to why. Including a photo from a similar project for explanation.)
Place shelves on both units. They should match up. 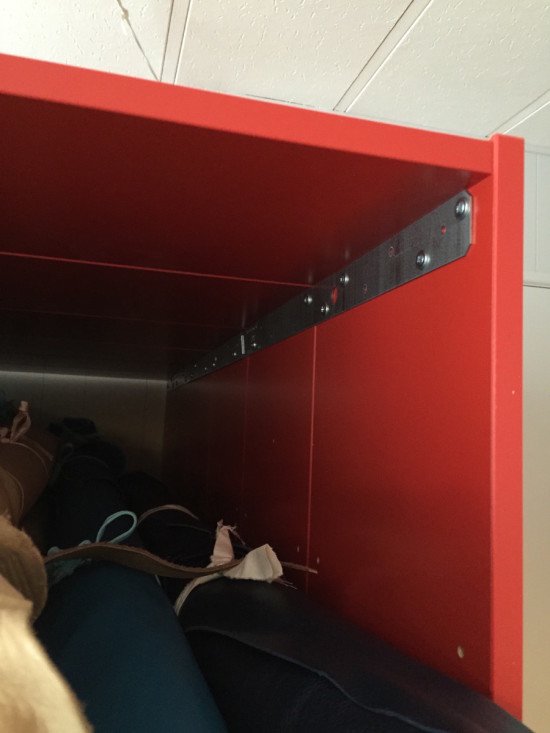 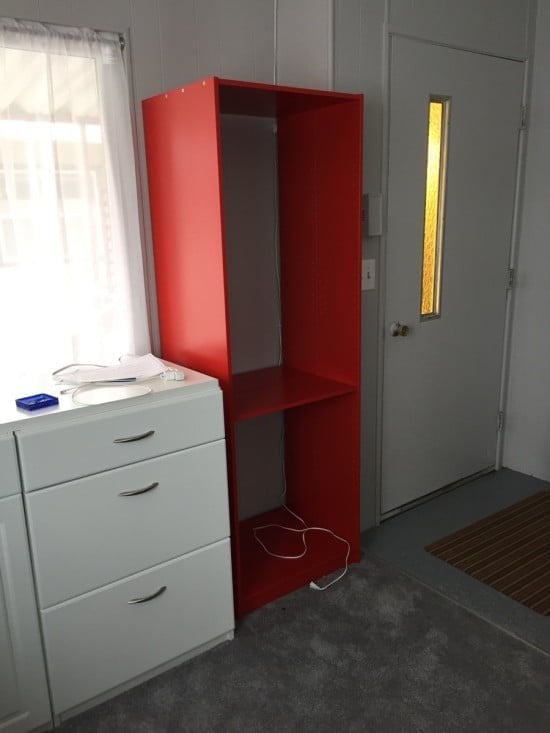 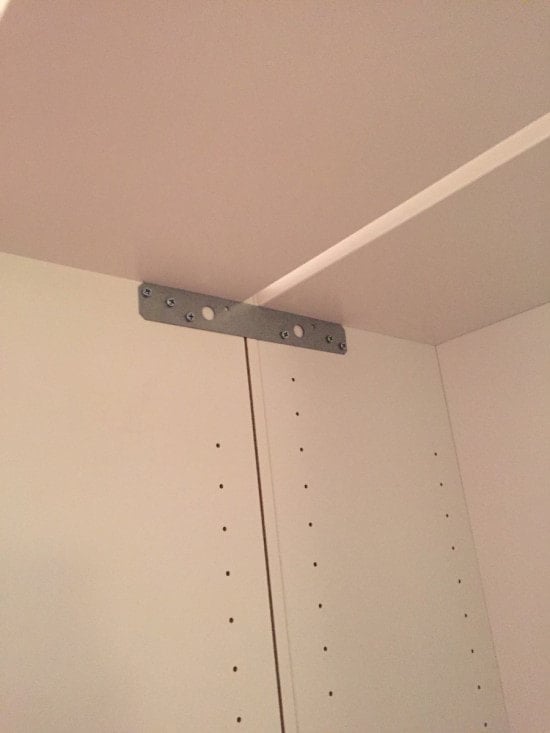 Assemble another FINNBY bookcase. Do not add the backing.
Insert pins for shelving.
Stand the backless bookcase in front of the others.
Attach the front bookcase to the one behind it using more plate straps as in step 4.
Put the shelves in place.
Repeat until all 6 bookcases have been assembled and are standing one in front of the other.
Load that puppy up with a bunch of stuff! 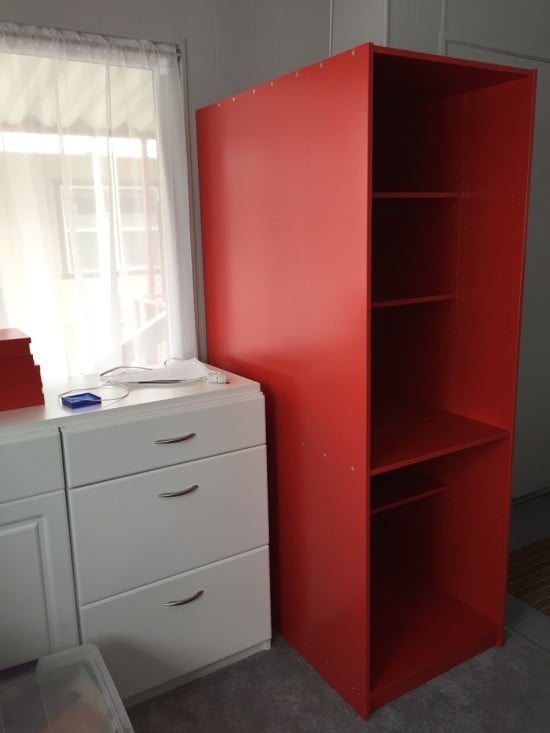 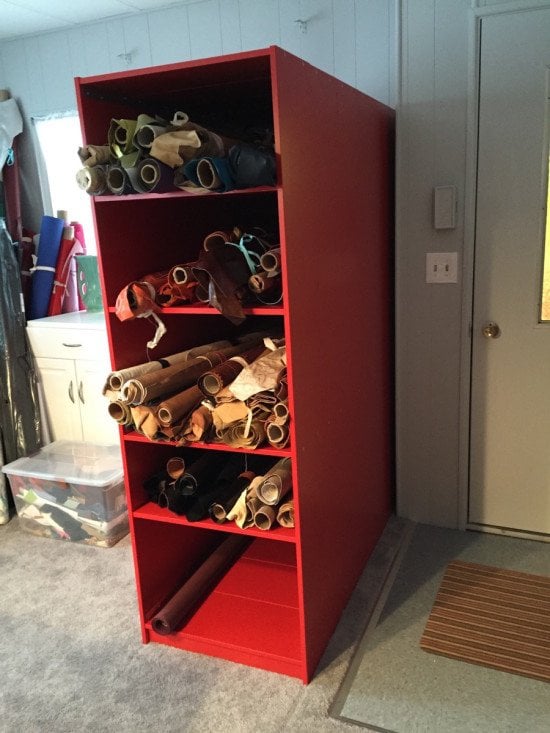 Notes: When I first assembled this, I didn’t attach each one as I went along because I thought it would hold up on it’s own and the bolts of material would be heavy enough to hold it in place. It wasn’t so a few days later, a friend used long pieces of metal tie strap and crawled inside to screw them all together. We also had another issue where the rolls of material were putting so much pressure on the sides of the unit that they bowed out and the shelves fell. To solve this, we screwed the shelves in from the outside. If you’re using this hack to store heaving round things like bolts of fabric, I’d recommend doing the same.