A pegboard cable management tray to keep cords off the floor

I have an old Ikea TV Bench (something like a Besta?). You could do this with a Besta or something similar. My bench holds a number of 90s hi-fi components. I wanted to find a way to tidy up the cords. This would also make it easy to sweep dust from behind the unit. Besides the cords from the hi-fi system itself, there were cords from the internet modem and wireless router components. I wanted to have my internet connections right by the entertainment system for streaming television or music. 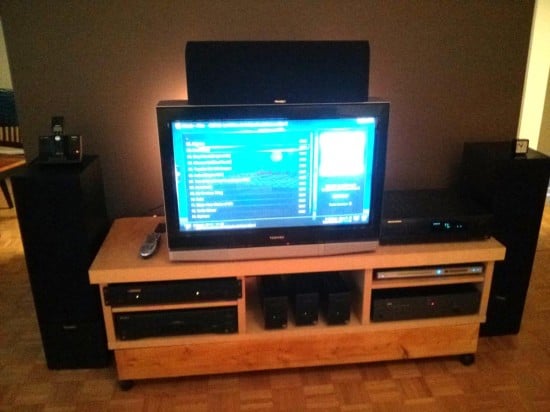 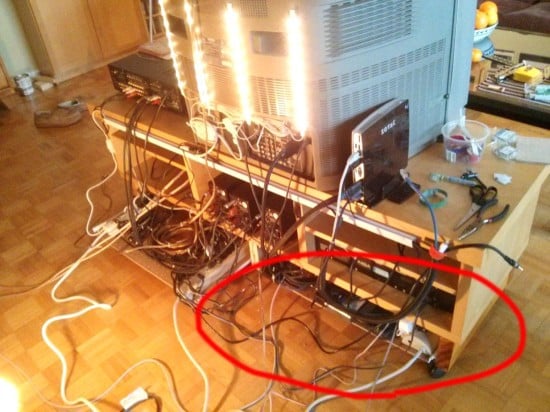 The idea was to add a frame underneath that would RAISE the entire unit by about half a foot. That extra 6-inches of clearance would create the space to put in some drawers. From the front and sides you have a beautiful wood finish panel, and the TV is perched 6-inches higher. The drawers would be made of pegboard so that components could be securely fastened, cords tied down. Push the drawer in, and everything is out of sight.

-Besta TV Bench, or something close to it

The TV bench is ~57.25 inches wide by ~17.75 inch deep; below notes provide cut pieces of lumber and pegboard.

You should take your own measurements, as my TV bench probably won’t be quite the same as yours. But if it is, the below should work.

First, I sanded and shellacked the cuts of pine: 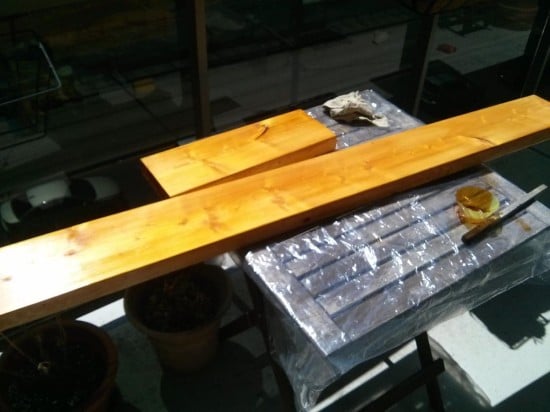 I turned the unit upside down and laid out the pieces that would assemble into the frame. There were five existing wheel casters I had to remove from the bottom. I kept those. Those wheels (except for the middle one), would have to be secured to the completed frame. For the replacement wheel in the middle of the unit, I purchased a thinner mount. In retrospect I should’ve bought thinner wheels for all four corners, too. Ultimately I could get three out of four screws into the four outside corners of the assembled frame, and that was strong enough. 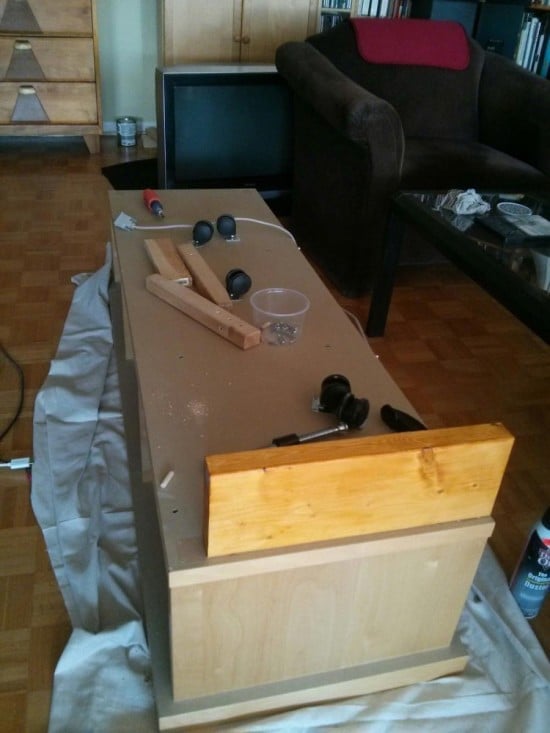 I tried out the pegboard pieces to make sure they would fit inside the frame measurements. Remember to leave enough room for the drawer slides. The lumber cuts I’ve indicated should provide a 3/8 inch gap of space, leaving room for the slides. 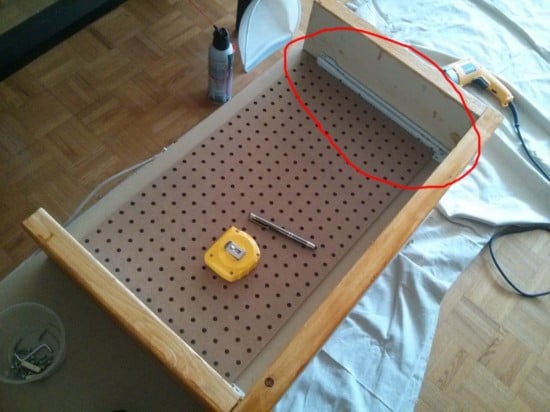 I assembled the frame using pegs. To get the pegs to fit properly along the lengths of pine frame, I used a piece of wood with holes pre-drilled. This was a guide for ensuring when I drilled into (i) the frame or (ii) the bottom of unit, that the correct hole separation (for pegs) was achieved. 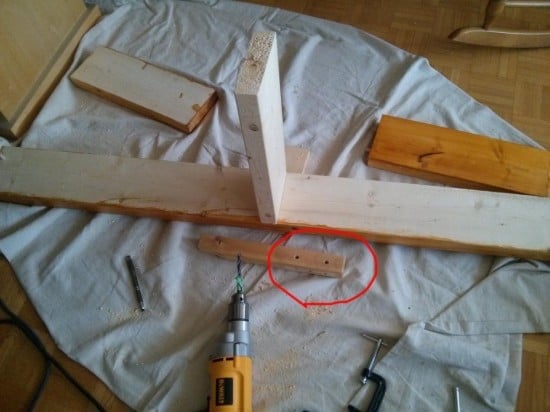 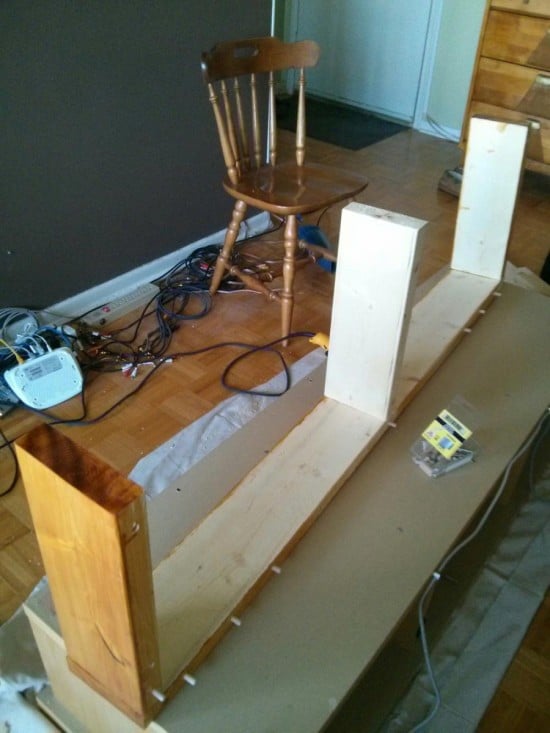 It was a bit of a process to drill holes for the dowel joints. Once the frame was assembled, I also decided to screw in some 90-degree brackets at the corners. Then I inserted the pegs into the holes along the frame, for attaching to the unit’s underside. You could wood glue the whole frame to the bottom of the unit for added strength.
I attached the drawer slides to the frame (outside slides). I attached the inside slides to the pegboard.
I fastened the wheel casters back onto the frame. (As I mentioned before, I could get three out of four screws into the wood at the corners of the frame. The wheels attached securely, but it might be best to use mounts that better match the 1.5 inch width of the frame… like the wheel along the mid-centre) 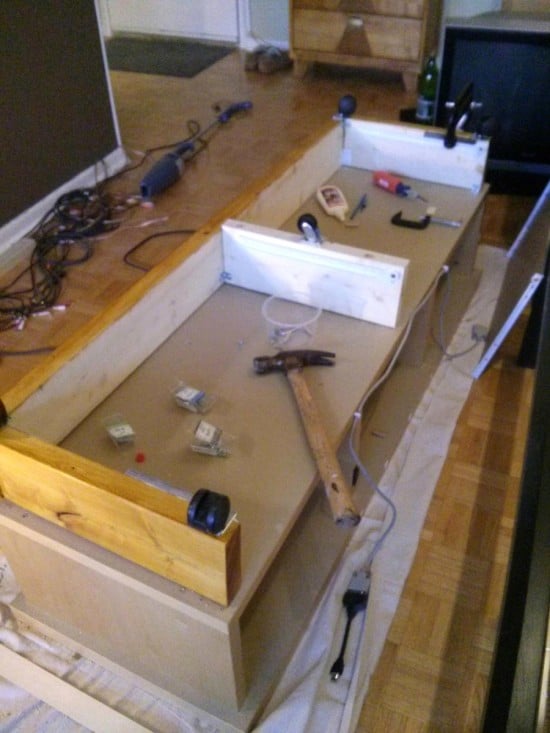 Then I turned the entire unit right side up. Inserted the pegboard drawers. 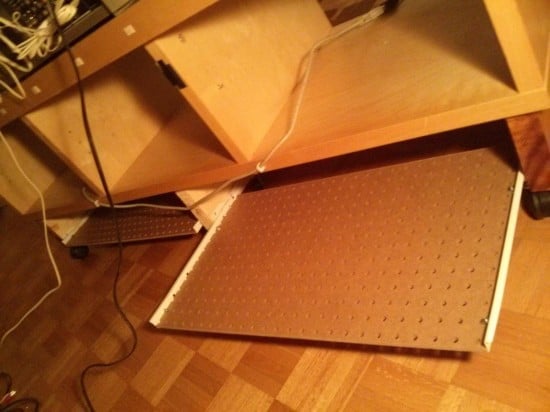 Attached the components and cords to the pegboard: 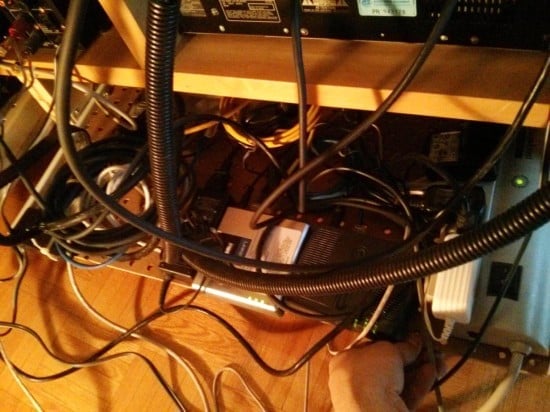 Done. No more jungle of wires behind the unit. Simply roll the unit away from the wall to sweep dust.